In the Nation’s Service 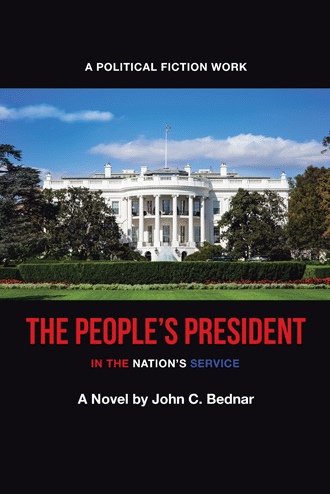 In late April of a turbulent election year, George Franklin, a distinguished Professor of Political Science at Princeton University, calls up the local Associated Press Office and calmly announces that he is throwing his hat into the ring as an Independent for President of the United States. In his brief statement, Franklin declares that he will follow two principles throughout his campaign. He won’t spend a dime of his own money to become elected and he won’t accept a penny of anyone else’s money. The surprised person on the other end of the call decides to put the crazy statement out on the wire, thinking that it might be a humorous filler for some newscaster. Sure enough, that evening a major news anchor, at the end of a long program about scandalous political news looks at the camera and says: “And folks, if that’s not enough political news for you today, we’ve just learned that George Franklin, a Professor at Princeton, is entering the race at this late date as an Independent. He won’t spend a dime of his own money to become elected and he won’t accept a penny from anyone else. By our calculations, that gives him just nine cents to become President of the United States.” Charlie Gibson, a retired member of the Board at Princeton, is curious. He brings a camera crew to Princeton and interviews Franklin. When asked about his campaign, Franklin looks out at the American public and says: “I don’t want you to vote for me … unless you are willing to become better citizens!” And he adds that if they do want to vote for him, they are going to have to write his name on a ballot. This radically different approach to American Politics somehow touches a nerve as more interviews occur. Some extraordinary changes start to happen in the electoral process.

Dr. George Franklin is an idealistic yet practical political science professor at Princeton University who is fed up with the current political scene. In mid-April of a turbulent election year, George surprises everyone when he calls an Associated Press office and calmly announces he is throwing his hat into the ring as an Independent candidate for the office of the President of the United States. After he proclaims he will not spend his own money or accept contributions to run his campaign, George has no idea of the firestorm he has just unleashed.

After George’s surprising yet intriguing announcement, he summons help from respected campaign manager, Larry Stanton. While a growing number of supporters rally around him, another presidential candidate meets tragedy head-on. As George uses the press and social media to motivate the American public to actively participate in the political environment while eliminating the power of the dollar’s influence, his radically different approach to American politics touches a nerve. Now only time will tell if the citizens can transform the political process or whether the powerful leaders within the current structure will succeed in stopping them.

The People’s President shares the tale of a political science professor’s quest to run for the highest office in the United States and, in the process, change the future of his great country.