The Adventures of the Gobbies 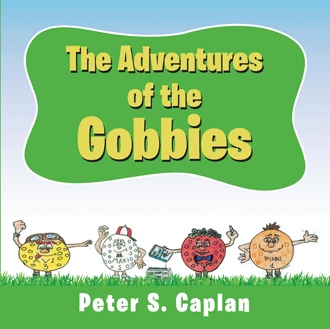 Suddenly a powerful light from the black sky focused on the little golf balls. The balls began to roll faster and faster into a fast spin around the golf course. As they rolled, muffled voices started coming out of each ball and the balls quickly came to an abrupt stop. An incredible thing was happening. The red golf ball jumped high into the air and as it was coming down, a face was forming and tiny arms and legs emerged from the ball by the time it came to rest on the ground. Just as abruptly, the other three golf balls had formed faces, arms and legs.

Now four golf balls each with different colors staggered on their little legs and erratically moved their little arms. The squirrels watched in amazement and the birds talked to each other telling the story of the birth of these golf beings!!! A small furry rabbit jumped out of the bush and hopped toward the balls. He stopped and stared, with his big eyes at these innocent golf beings.

The Adventure of the Gobbies

The storyline revolves around the forgotten golf balls that lay on the bottom of the water ponds all across the country. Some balls get rescued, cleaned up and back on the golf course being played and hit all over, while most of the balls just lay dormant with no existence at all: the lost balls that have made those great golf scores, the ones that were played on rough golf courses, nasty woods, and hot sand traps. They have been loyal, steady and very dependable.

But then all of a sudden, you have a bad shot and the golf ball sails into the water pond. It does a couple of plunks and sinks down to the bottom. The golfer feels bad for a second, grimaces and then pulls out another ball; and the game is on.

Those poor golf balls have been at the bottom for years. But incredible adventures begin to unfold:

Strange things begin to happen on the California Malibu golf course, during the night. On the fifth hole, the water pond was saying “pop, pop, pop.” The ground shaking, trees swaying, and the wind played a song across the sky. The birds and squirrels watched with much curiosity as the sky got dark, with clouds coming together to make a big marshmallow. All of a sudden pop, pop, pop shatters the stillness, as a red golf ball jumps out of the pond. The ball was flying through the air, followed by a whizzing sound echoing across the golf course. It finally came down on a grassy ground. Then pop, pop, pop, and three more golf balls jump out followed by plump, plump, plump, as the three balls came to rest near the red freckle balls. The other three balls had different colors. One was white, another yellow, and the third; orange. The balls lied very still.

Suddenly a powerful light from the black sky focused on the golf balls. They began to roll slowly, then they sped up and roll around fast, with muffled voices coming out. Blink, and the balls came to an abrupt stop. Seconds passed and the then the red golf ball jumped high in the air. As it was coming down a face is forming, as tiny arms & legs were emerging. The same procedure happened to the other three. Now four different colored balls staggered on their little legs and erratically moved their arms. Hence the beginning of new life for these golf beings.

We have Pinni (Pinnacle), a jovial gourmet chef, Toppi (for Top Flight) a dapper advisor, Maxi (Maxflight) an imaginative singer/dreamer, Avi for Aviator, the Tom Cruise of golf balls. After a conversation with a rabbit saying “Go be a success” they decide to call themselves “Gobbies”, because they are on the go. The golf balls must survive on the course, living in houses made of golf tees. They live on the side of the fifth hole in a tall grassy area. Everything the gobbies find on the golf course is put to good use. After finding a small pair of baby scissors the gobbies put a path through the grass where they can build their village surrounded by tall grass.

The gobbies must deal with animals, weather conditions and of course the biggest threat: GOLFERS! They do not want to be found and played on the golf course. The balls can be hit back in the pond, or put back in the golf bag and be gone.

At the end of the first episode the gobbies get to see how they were born. As they lay around the pond, they see the same procedure, produce four more golf balls. But these were different from their hair to soft voices. These were female golf beings. After meeting with the golf balls, the gals said “if you call yourselves the “gobbies” we’ll call ourselves the “gabbies”.

Followed by 30 more stories. My water pond can produce many more golf balls and the adventures are endless!!

On a beautiful July evening on the Riviera Golf Course in Malibu, something strange is happening. From the pond that stands on the fifth hole, there comes a sudden popping noise—and then four golf balls shoot out of water and grow faces, arms, and legs!

On the advice of a friendly rabbit, the four new golf-beings decide to call themselves the Gobbies. Together they set out to find a way to live on the golf course and still be safe; they also want to bring more golf balls up from the bottom of the pond. But how? First they must build new homes, to keep themselves safe from golfers looking for lost balls or enterprising animals looking for fun. Then one of the group wanders off—and finds himself caught in the middle of a game of golf! But will they ever find more golf-beings just like them?

In this children’s story, golf balls left at the bottom of a pond magically come to life and then begin to make themselves at home on the golf course.

Peter S. Caplan was born in Queens, New York City, and has always had a passion for both sports and storytelling. He obsessed with golf in particular and imagined what it might be like if golf balls came to life, and thus The Adventures of the Gobbies was born. He currently lives in Stuart, Florida.