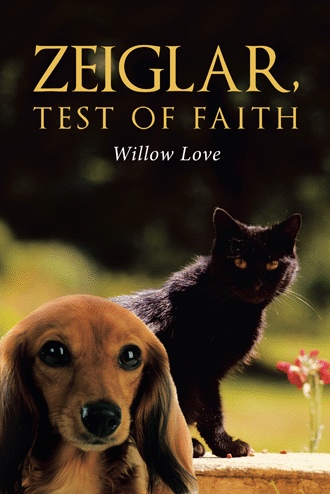 Her children had been taken back to their room and placed under the care of guards to prevent any aide being given to their Mother. The three kittens huddled together and spent time in prayer for their beloved Mom. They hugged each other, claimed Rhianna’s deliverance, and although they desired to stay up through the night in prayer...they fell into a deep sleep. Although Rhianna is the one wrongly accused and in the process of her own execution; her thoughts, her concerns, and her prayers are for the king first, her children second, Guran third, and lastly herself.

The villains stood by with smirks plastered to their faces; which they turn into pitiful frowns whenever the king looked their way. As far as they were concerned their plot could not have worked out any better. By the following morning they would have evidence of their worst enemy’s death and would follow it with the deaths of her children and then Guran’s. So it was no small wonder that the villains retired to their quarters, ate a congratulatory meal, and went to bed happy with the thoughts of how easily they had destroyed their enemy. No doubt they dreamt of all they money they were going to steal.

Rhianna stand steadfast in her belief in the Lord God. She refuses to make any statement of apology to those who have accused her or even beg for her life. Her life or death is totally within the hands of the Lord of all creation. As king orders Rhianna lowered into the hole leading down into the eight foot deep crocodiles’’ pit; the king again speaks words of encouragement to Rhianna.

Now some of the crocodiles began fighting over which one would get the small morsel being lowered down into their nasty pit. Rhianna closed her eyes and prayed for God’s will. Back in the throne room there was no doubt the king reminded himself of the way his trusted men tricked him many times during the night Rhianna spent in the pit of crocodiles. (Loosely based on Daniel 5: 31, Daniel 6:1-27)

Will Rhianna become the crocodiles’ snack?

Will the evil doers continue with their well laid plans to destroy the kittens and finally the king’s once well trusted Guran?

If so will God save the children or Guran?

Or will the Lord of all creation help Rhianna?

Do you ever wonder what it would be like to have something you care about deeply snatched away in an instant? What if someone you loved and trusted betrayed you? How would you feel?

In her book Zeiglar, Test of Faith, author Willow Love tells an adventurous and a spiritually oriented story about a group of animals. But these are not ordinary animals. Rhianna, a beautiful cat, is captured by a beast. Leo, her beloved mate, betrays her to save his life. And when Rhianna’s children ran away to find a new home for just their own family, they begin the journey and fight to find each other again.

Based loosely on biblical stories, including the book of Daniel, Zeiglar, Test of Faith shows how faith, love, and determination can turn lives around and help you find what has been lost. Though one can have difficult times, there is always hope when one has faith. It works for the animals in Love’s story, and it can work for you.

Willow Love was born in Waco, Texas. She graduated from McLennan Community College with a nursing degree in 1981. In 1986, she returned to McLennan Community College and earned an associate’s degree in English and theater arts. She attended Baylor University and graduated with a bachelor’s degree in English and theater arts. She enjoyed preforming on stage and wrote, directed, and appeared in a one-woman show. She also enjoyed a brief career as a singer.