by Ray A. Jones & Illustrated by Allison C. Fulghum 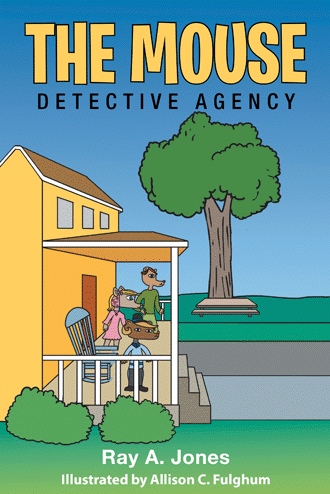 “AHOO, OOOH,” Darrel the hound dog howled. He always made his displeasure known when his dinner was late. The jailor didn’t really pay attention to what the inmates thought of the way he ran the jail, but Blackie the cat thought Darrel’s howling caused the jailor to hurry and serve dinner. Blackie liked the way Darrel howled when dinner was late. Blackie even tried to learn to howl like Darrel, but every time Blackie tried to howl, the sound came out “meow.” Darrel tried to teach her, but she just couldn’t get the hang of it.

Blackie was in the cell next to Darrel, and they had become friends, since they knew several of the same folks. They talked about everything. They spent many hours talking about whether dinner was on time, how they wished that lights out was a little later at night, and why each of them had landed in jail. Blackie discussed how she wished that her life had taken another direction. She was sad that she spent so much time in jail. Darrel understood what Blackie was talking about. He had been involved in several shady dealings and had spent considerable time in jail himself.

Both Blackie and Darrel were released from jail within a week of each other. Before leaving the jail, they agreed to be good citizens of Mouseville. When they were released, they found houses to rent; Blackie was on the north side of town and Darrel on the south side. They visited each other often. They went out to eat, played cards, and tried to stay away from shady dealings.

One evening when they were watching a movie at Blackie’s house, Darrel mentioned that he saw one of his friends from the dark side. He had talked with Farley the fox and renewed their friendship. He asked Blackie if it would be okay with her if Farley had dinner with them on Friday. Blackie and Darrel had a regular dinner outing every Friday. Blackie said that she knew Farley and would enjoy having dinner with him.

When the movie was over, Darrel said goodnight and drove home. While he was driving, he found Farley’s phone number on the rapid-dial menu of his cell phone and pushed the button. Farley was slow to answer the phone. He had visited the local bank to see how he might get into the building after it closed so that he could rob it. He was thinking about what he had learned and didn’t hear the phone. He finally answered the phone, but he didn’t tell Darrel about his day. He wasn’t sure what Darrel would think, as Darrel had told him he was trying to stay out of jail. Darrel asked if he could meet Blackie and himself for dinner on Friday. Farley said, “Sure. I’d like that.”

After they ordered their dinner, they started talking. Blackie said that she’d been thinking of opening a car rental agency since the town had only one, but she didn’t know where he’d get the money to start the business. Darrel said that he wished he could open a pizza restaurant somewhere on Main Street. He thought that the town needed another pizza restaurant, but like Blackie, he didn’t know where he was going to get the money.

Farley told Blackie and Darrel that he didn’t know where to get that much money either. He’d been thinking about how to get a lot of money, but he hadn’t come up with a plan, at least not yet. When their dinner arrived, they started to eat. They talked about the food instead of where they could get money. After they had eaten, the waiter removed their plates and asked if anyone wanted dessert. No one ordered dessert, and the waiter brought the check. Farley said that he wanted to pay for dinner, and both Blackie and Darrel agreed to let him pay this one time.

They were not ready to go home and continued to talk. After talking about baseball and football, they began to talk about where they could get money to start the new businesses they all wanted. Farley said that he had an idea, but he didn’t know if Blackie and Darrel would be willing to help. He suggested that the three of them could rob a bank, and then they would have plenty of money. Both Blackie and Darrel said they were not interested in helping to rob a bank. They had recently been released from jail, and they knew that the M & C Detective Agency would catch any bank robbers. Farley was disappointed but said, “It was just an idea. I know that both of you are upstanding citizens now.” He chuckled and then added, “At least, I think that’s the case.”

Mouseville is a unique town in which cats and owls don’t chase mice and rats. In fact, cats, mice, foxes, owls, flying squirrels, and raccoons all live in harmony. However, one thing the animals have in common with the human populace is greed. Sometimes, even animals want something somebody else has, and some of them don’t want to pay for it.

Enter the M&C Detective Agency, owned by two mouse friends, Murray and Cathy. They take on the crooks of Mouseville and Rattown with confidence. Whether searching for stolen cheese or solving a bank robbery, the M&C detectives always get their man, er, cat! A problem at the circus, a mystery at the baseball game, missing diamonds, and even a great train robbery cannot deter the mouse detectives.

The sleuths drive a bright, yellow Mousemobile convertible. They are well known around town, especially to the chief of police, who often calls on them for help. The mouse detectives turn even the most challenging case into a bit of fun, and the celebration of success always takes the form of a picnic with their friends.

Ray A. Jones is a professional engineer who has written nine technical books on electrical safety. Jones lives in Fuquay Varina, North Carolina, with his wife, Jane. He and Jane enjoy traveling and have visited all fifty states and several countries.