Ghost on the Path

by Gail A. Webber 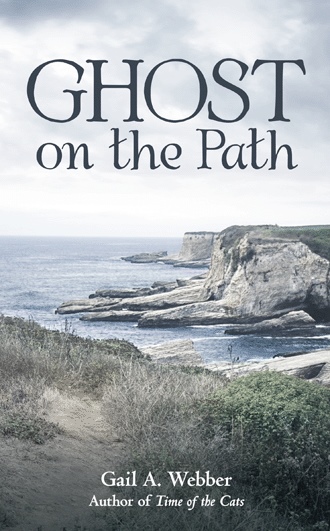 A NOTE FOR WEB TEXT ON THE FREE PREVIEW: The SIF form accepted no italics (at least not in a way I could figure out) and the use of italics in the passage I selected is important. The third document I've attached is that same passage with the italics included as they are in the manuscript itself.

Amanda could hear none of the normal night sounds, no owls, no insects, only the far off rumble of the surf. As she walked, her shoes filled with dry sand, and razor grass whipped around her legs whenever she wandered off the path. The farther she walked, the more desperate she felt. Nathan was gone! Finally she lifted her long skirts and ran as great tears streamed down her face. She nearly crashed into the pile of boulders midway to the beach, but saw it at the last moment and slid to a halt with her hands against the cool stone.

And Sarah awakened. It took such effort to wake, such strength to reach out and hold on, but someone had come, someone who could understand.

As Sarah clutched for a hold on this grieving mind, held tightly, and began to weave herself into Amanda’s thoughts, Amanda collapsed. The sound of the sea became muffled, as if she was packed in cotton wool, and she felt so heavy it was hard to move. Amanda could think only of her loss, only of the past. Silent, remembering, aching, the aloneness seemed to swallow her, as if she were the only person left alive. Amanda’s heartbreak made Sarah stronger.

What? Amanda heard the words but they were in her head instead of her ears. Feeling the grit of sand on her cheek, she was aware of images surfacing in her mind, memories, but they were not her own. A cabin on the hill where her house stood. But her house was huge and it stood alone, while this little cabin was surrounded by others as primitive as it was. It felt long ago. And there was an attack. She forgot about Nathan because now there was no Nathan. There was only Tom.

So many ways to die, but in the end all are the same. If only the children had lived. If only there had been grandchildren to love. But now?

Maybe they’re hiding, but where are they, and what’s happened to Tom and Elias? We have to find the other children and protect them!

Why was she so frightened, like she was lost in a nightmare that wouldn’t stop? “That’s it, this must be another nightmare,” Amanda said out loud and the voice in her head faded to the background. The children were safe, Amanda thought. They were with Silas and Lydia. “I have to make myself wake up,” she said. But even if this wasn’t real, Nathan was gone. Nathan was never coming back. She groaned giving in to the grief again, and the voice in her head grew louder.

Remember when baby Elizabeth learned to giggle, and how proud Elias was to go hunting with his father? Are they still together?

Remember showing Emma how to make trousers for the little ones, how the legs were different lengths? Remember where I last saw those little clothes. I didn’t keep them safe.

Barking, loud barking. I hate dogs! No, go away! Amanda shook her head, confused. She didn’t hate dogs. And was the barking from Pharaoh or some other dog? Those children she remembered, they weren’t hers, and her husband was Nathan, not Tom. How could she remember things that never happened, people she didn’t know? Was she losing her mind?

The barking faded as thick oily smoke surrounded her, forcing her to breathe it in. A strangled wail tore out of her throat that was tight and raw. The baby! “Which baby,” she wondered. Baby John? She was so thirsty, and her shoulder hurt terribly. Amanda shook her head trying to separate the real from the rest. It was as if she was someone else. She remembered that she meant to stand in the sea. She would be closer to Nathan there. Yes, stand in the sea. …and then she would walk out until it covered her, dragged her down, and gave her peace. Amanda got up and started toward the beach.

Barking again, this time with snarling, loud and vicious, broke through the cloudy haze and Amanda’s thoughts cleared when she felt teeth on her arm.

Attacked by a dog! No, not again! Get away from me, get away! Amanda threw up her hands to cover her face as Sarah remembered being attacked by a dog and was terrified by the barking around her now. Sarah struggled to hold on, even though she feared the dog. She couldn’t bear to be alone again, not now, not when someone had finally come for her. Someone who could hear her and understand. Someone who could help her.

In the 1600s, a brutal massacre on an island off the coast of New England leaves only one survivor: Sarah. Wounded and alone in the carnage, she fights to stay alive as she waits for her rescuers. Each night, she returns to a group of boulders along a path to the beach and listens to scavengers feed. That path is where she finally dies, but her spirit lingers on.

For more than three centuries, Sarah’s ghost waits in the rocks for someone to save her. Most walk her path safely, but if they harbor dark emotions—anger, regret, hopelessness, or grief—she awakens. Sarah’s spirit does not carry ill intent, but her presence magnifies the darkness in anyone she touches, producing rage, violence, suicide, or madness. Few manage to escape.

Three groups in particular encounter Sarah’s ghost: a whaling family in the 1800s, a young boy in the 1940s, and an elderly man in the present day. Each of them wants something, each has something to learn, and each could save Sarah, but the price is high. If her ghost is ever to find peace and resolution, then someone has to risk everything for her sake.

Gail A. Webber is a retired science teacher who lives in western Maryland with the love of her life, Bill. Her published work thus far includes a number of short stories and one other novel, Time of the Cats. She loves hearing people’s stories, learning new things, and finding lessons in unexpected places.