as the Transitional Target of a Religious Psychopath 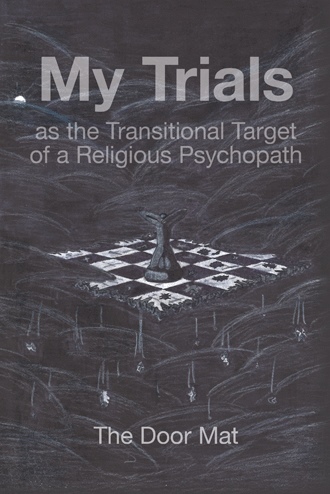 To say Danielle had charm on her side would be an understatement. Danielle had a unique attractiveness about her even though I did not find myself as attracted to her that first meeting as I did weeks to months later down the road. Danielle stared right into my eyes so intently, so confidently to build some sort of bond with me.

I immediately found myself cornered in an open dining area as Danielle began her uniquely charming yet at the same time, creepy question asking. Danielle sort of led me on in the process because she did not care what else was going on. She just wanted to hammer question after question at me like speed dating in a non speed dating environment. I had never encountered anything like this before so I was sort of confused yet I liked the charm; it seemed rather pleasant to me.

Looking back, it is likely Danielle wanted to see how I would react and basically, control the introduction.

After I gave her my name, the questions Danielle asked me went in the order I state below. Some of these questions she asked might strike you as they struck me as out of place, odd, or even forward.

Something that is noteworthy to understand is that during this whole conversation, Danielle was staring very intently into my eyes; I had to break eye contact on several occasions, it was too much. When I would look back, Danielle would still be staring at me…

Many people find it hard to deal with the intense, emotionless, or “predatory” stare of the psychopath. Normal people maintain close eye contact with others for a variety of reasons, but the fixated stare of the psychopath is more prelude to self-gratification and the exercise of power than simple interest or empathetic caring.1 (Hare, 208)

Besides the stare, Danielle’s upper parts were frozen and she had her hands folded over each other but in an extremely relaxed position. In a way, the kind of treatment I was receiving can make someone feel special despite the obvious awkwardness. No one was ever this interested to meet me in my life.

After the questions started getting strange, John asked in a confused sort of voice, “What is this?” Laughing, he further ensued to ask Danielle, “Why are you asking these questions?”

It is not easy to get beyond the winning smile, the captivating body language, and the fast talk of the typical psychopath, all of which blind us to his or her real intentions.2 (Hare, 208)

Danielle did not really have an answer, rather a smug smile like she was content with my answers and had gotten what she wanted out of the introduction. Everyone was pretty much left to simply laugh about the whole Q and A since it was odd but funny. Isn’t that what you would do after such an introductory interaction as well? Laughing is a good exit strategy isn’t it?

During that conversation, I felt the only way to keep the conversation from being too awkward was to sort of play back and at times, ask some rhetorical questions back her way. This showed cooperation.

When I asked back to break the silence, Danielle simply replied, “I am 23.”

Now pay attention to this! Danielle was the same age. What would you do if you just found out the person you just asked is the same age as you? Wouldn’t that be interestingly cool? Wouldn’t you just have to reply and say something like, “Oh, I am too!” or “That’s how old I am!” …Normal bonding.

When Danielle asked if I had a best friend, I replied, “Yes, don’t you?” I further continued, “Doesn’t just about everybody?” thinking that was a given. But, Danielle avoided the question… I think Danielle just tried to smooth that over by not replying to my comment.

When Danielle asked for my best friends’ name, I replied, “I don’t know if I can narrow it down to one.” I then rhetorically asked, “Why limit oneself to only one ‘best friend’ in the first place?”

After my response, Danielle persisted I chose one as my very best friend. After some hard on the spot uncomfortable thinking, I chose one...

Then it just got creepy when Danielle asked what color his eyes were… Right off the bat Danielle just seemed to have little fear of embarrassing herself.

This question was a little unfair… Danielle made me feel guilty by then saying, “Why don’t you know the color of your best friend’s eyes?”

By being in control, Danielle was able to point out a flaw in me so that I would focus on my personal flaw instead of finding something wrong with her from the very moment we met. At the time, I didn’t realize this was not a harmless comment. She was actually presenting herself as superior. Danielle was creating a social hierarchy in her head.

I had not met someone so forward like this, someone who strongly used impression management techniques.

Mark’s story begins several years back when he ventured to a foreign country for unique career-building experiences. It is there he eventually met more and more like-minded individuals and someone who appeared extra special.

This same-aged woman was on her game as she presented a convincing picture of virtue. Mark had no idea that he was about to become quite the victim of a high-functioning, proactively religious psychopath.

Mark beautifully illustrated how counterintuitive his experiences with a psychopath were and goes in great depth to show how these abuser victim roles play out in real life encounters. This is interesting information that is often not included in other books on the same subject matter.

In sharing how he figured his way through his extended encounter with a primary psychopath, he seeks to spread awareness which will help members of our global society identify psychopaths before they cause their applicable levels of damage.

Join the author to educate yourself on the increasingly trending topic of psychopathy. There are many things Mark assists you in taking away from encounters with psychopaths and their influence on the world around us. Psychopathy is certainly a topic worth getting a grasp over. Look into this critically constructed book and you’ll be happy you did!”

Mark Wilson is a young man with many interests that keeps him active and enjoying life. He brings an intelligent, biological perspective to the psychology of the disorder psychopathy. His real-life story teaches society why we need to spot dangerous predatory psychopaths before they can cause serious damage and become legendary in antisocial ways.