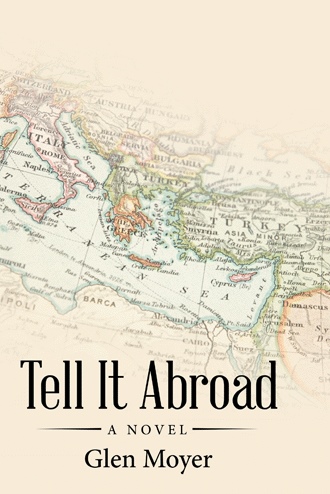 I had barely sat down when I heard Marcellus: “Remus!” He was coming toward me and then stood in front of me as I stood up once again. “You can get things ready. That’s three for the hill.” He held up three fingers so he would be sure I understood. Even after all these years together, he was never sure I fully understood him. I nodded and held up three fingers to confirm. Just then Cornelius came by nearly dragging Jesus behind him.

“Let’s get going, king of the Jews,” shouted Cornelius, suddenly standing still and shoving Jesus to the stones in front of him.

Marcellus was shaking his head slowly and scowling. “I hope you’re happy with your fun times, Cornelius. You’ve done a good job on him.”

“Don’t blame me. I didn’t order the beating. That was Pilate’s doing!”

“I know that. But the thorns, the robe, the mockery, it’s all childish foolishness. You’re just a kid playing at soldier.”

“Listen, Marcellus, I have had it with your uppity ways. Just because you come from a family of wealth in the city, and I’m a country boy, doesn’t make you any better than me.” How often have I heard this argument before? I thought.

“But I’m your commanding officer, and if you want to avoid the whip yourself, you know you had better get that prisoner down to the staging area, and I mean now! Am I making myself clear?” Cornelius nodded and grabbed the prisoner’s shoulder and lifted him to his feet.

“Let’s move it there!” said Cornelius as he and Jesus left. Marcellus shook his head and gave a swift kick to a loose stone, sending it across the courtyard.

“If I didn’t like him, I’d court-martial his stupid ass right out of this army.” As always, Marcellus felt free to speak his thoughts in front of me, knowing I couldn’t really tell anyone about them. I had often seen and heard the two of them, good friends at times, and at other times just as ready to draw swords on each other. I especially recalled them getting drunk together and then fighting over whose prostitute had been the prettiest that evening. Cornelius would insist that Marcellus had more money and so got the prettier woman. And since Marcellus was higher rank, Cornelius always ended up yielding in every dispute. I sighed to myself and got up to head for the storage area. When I got there, I loaded my large wicker basket with six iron spikes, three longer spikes, some pegs, a mallet, and assorted ropes and rags, and carried it out to the staging area behind Pilate’s palace. Several soldiers were bringing two prisoners up from the jail section, and Cornelius was pushing Jesus along in front of him.

“Move along, king of the Jews,” laughed Cornelius as he shoved him forward into the open staging area. “Gaius, get out three crossbars, and let’s get going here,” he shouted.

Marcellus liked everything in order, and everyone knew it. Three soldiers pulled crossbars off a heap on one side and dragged them forward. It was a common, almost daily, routine. Gaius would lead the parade with a few other soldiers to make way through the streets and open a path through the crowds. The two thieves were each pointed toward a crossbar. “Pick them up, one for each of you. It’ll only be worse for you if you don’t.” Gaius cracked a small whip at the prisoners’ feet, and they hopped and swore at the Roman, but lunged at the crossbars and picked them up.

“Smart boys to obey but not smart enough to avoid getting caught, heh?” sneered Cornelius. Then he turned to Jesus, who was barely able to stand up, it seemed. “You, too. Pick that third one up,” and he shoved the bleeding man toward the remaining crossbar. He grabbed Jesus’s cloak and lifted him almost off his feet. “C’mon, let’s see your stuff, mister. Show us what you’re made of, king of the Jews!” and he snorted a brief laugh.

“That’s enough, Cornelius!” it was Marcellus. “Just get him in line with the rest. And I mean now!”

The two stared at each other with a moment of hatred, and then Cornelius whirled away toward his charge. “Okay, pick it up, king of Jews!” Cornelius said it with as much childish mockery as he could manage. Jesus stumbled forward to pick up the remaining crossbar. I couldn’t sort out how this man could possibly be accused of being a king. The bleeding man glanced at Marcellus, and next at me for just a brief moment. He tipped his head a bit and seemed to nod at me. Then shuddering in pain, he bent over and placed the crossbar on his bleeding shoulder.

Tell It Abroad introduces Andronicus, the third son of Simon of Cyrene, the bystander conscripted by the Roman centurions to assist Jesus of Nazareth in carrying his cross to Golgotha. Moyer adds flesh and bone to the brief mention of Andronicus in Paul’s letter to the Romans, “Greet Andronicus and Junias, my kinsmen and my fellow prisoners; they are men of note among the apostles, and they were in Christ before me.”
The novel presents Andronicus’s life and witness as he tells others of how Jesus healed and empowered him. He relates the story of crossing paths with Jesus at His crucifixion, receiving healing, living in the community among those who witnessed Jesus’s resurrection and then telling the Good News abroad to Rome. Moyer, an ordained minister, weaves together scriptural details and vividly drawn characters in this historical Christian novel.
In this novel, a young man finds himself poised at the crossroads of secular history and the growth of the early church.

Glen Moyer, an ordained minister and practicing dentist, has written, produced, and directed one-act plays performed in worship and has written and performed numerous Christian first-person monologues bringing biblical characters to life. He is a graduate of Muhlenberg College, Allentown, Pennsylvania. He studied theology at Lancaster Theological Seminary, Lancaster, Pennsylvania. He and Suzanne, his wife, live in Vermont. Tell It Abroad is his first novel.