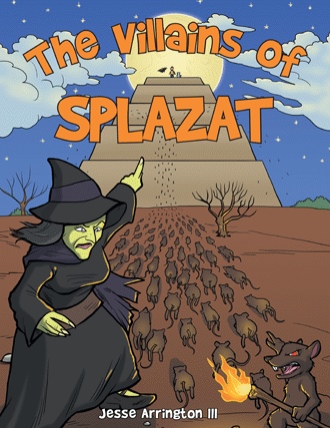 So early next morning, they walked to Splazat.
There was Matt and Pat, the chatty acrobat,
And the wide-eyed cat, Tit-for-tat.
They were careful to avoid Splazat's mudflat.
Everyone was there, except for Sadat.

It was dark and gray when they arrived in Splazat.
No color and gloomy, all was just achromat.
The odor was bad, the smell of rat scat,
The trees were dying because of the rat,
But to save them, someone had sprayed bacteriostat!
To rescue the leaves on the trees of Splazat.

The rats did not see the arrival of Matt,
Or Pat the bat or Tit-for-tat.
They were too busy celebrating the Nat’s Sabbat,
To pay any attention to Pat and Matt,
Or to his cat, Tit-for-tat.

Matt snuck closer to see the rats,
And discovered there were many gerontocrats.
It scared him to see so many rats,
Their out of control antics, like mobocrat brats.
He turned and whispered to his cat, Tat,
“Are you ready to rid Splazat of the rat?
What’s your preferred eradication format?”
“I have no idea,” whispered Tit-for-tat.
“It’s her idea,” pointing to Pat the bat!

“NO, it wasn’t my idea,” yelled Pat,
The chatty black velvet-winged bat.
“It WAS your idea,” interrupted Matt,
“To run the rats out of Splazat,”
Looking straight in the eyes of his cat, Tat.

“Oh, I’m so sorry I said that,” voiced the cat.
“Don’t be sorry,” assured Matt, to his tabby Tit-for-tat.
“But, someone did have a foolproof plan,
Remember, my friend Pat?”

“Oh, yes,” admitted Pat. “Indubitably, I remember that,
I did say, ‘Let’s rid Splazat of the hideous rat,’
I just now put on my memory hat,
To help me stop acting like a nitwitted brat.
And now I recall saying all of that!”

“Thank you for your honesty, Pat,” praised her best friend Matt!

“OK, here’s the plan,” whispered the chatty black bat.
“While the rats are celebrating Nat’s Sabbat,
We will all sneak behind that brick ziggurat.”
“Ziggurat?” laughed Matt. “Just what is that?”
“That is a funny word,” chuckled Tit-for-tat.
“Never mind the funny name. We need to know where we’re at,
So stick close together, stay as quiet as a gnat,” whispered Pat.

“So how do we destroy that rat?” asked Tat.

“Here is MY plan!” declared Matt Murat.
“I’ll cast a magic spell on Nat,
My diamond charm of one carat,
Will hypnotize that rat and frat,
I’ll swing it cross their eyes like that,
Just like the magician Concordat.”
“A diamond carat?” asked the cat.
“What will happen using one carat?”
“A trance will befall the apparat frat,
And turn them into a zombie-like rat
As they stagger all the way to Gujarat!” declared Matt.
“I’m not even going to ask where that’s at,” mumbled Pat.

“We don’t need spells and hypnosis,” she reassured Matt.
“We will use our strong voices to scare Nat’s Sabbat!”
“Yeah, and good luck with that,” laughed the sarcastic cat.
“Yes really, we will,” said the velvet-winged bat.

“I will use my high frequency voice and scare the wretched rat,
See, I was born with ears so sharp, I hear sounds higher than a rat,
Bats can hear my decibel screams, but I think…so can the frat,” said Pat.
“Well, I know I can hear your high-pitched screams,” said Tit-for-tat, the cat.
“I can hear farther than a big-eared bat, did you forget that, Pat?” asked Tat.

“One time I heard a numbat blat,
Then I heard a bearcat spat,
But then I realized it was only a fat bobcat,
Snoring on my bathtub mat,” said Tat.

“ENOUGH!” yelled Pat. “I know your stories, Tit-for-tat,
And, this is NOT the time for stuff like that!”
“Oops, SORRY,” said the embarrassed cat.
“That’s OK,” said Pat the bat.

“Now back to my plan to get rid of the rat,
And save the bats and gnats of Splazat!
I’ll make a batty scream so loud, it’ll burst the eardrums of Nat’s frat,
And forever end the celebration rites of Whinchat and her hero Nat!
Then we’ll change the name of Splazat,
To something more appropriat(e),” said Pat.

“My shriek will be so loud and scary, the rats will leave Splazat!
Now, when I yell, ‘What’s scarier than a giant wombat?’
I want you all to holler, ‘YELLOW PUSSY CAT!’”

“Why yellow pussy cat?” asked Tit-for-tat.
“Well…rats are naturally scared of the cat,” said Pat,
“But especially scared of a big yellow cat.”

“Aw, shucks,” said Tat. “I wish rats were frightened of ME like that!”
“They ARE,” assured Pat, “You’re a cat. Right, Tat?
And with a name like Tit-for-tat,
Those rats will run so fast from Splazat,
They won’t have time to grab their hat,
They’ll run as fast as Secretariat,
When they hear YOUR name, TIT-FOR-TAT!”

One could almost see the emboldened cat,
Sit up tall after hearing that from Pat.
“Get rid of that diamond charm,” Tat told Matt.
“You don’t need it now, you have ME, Tit-for-tat!”
“Yes,” laughed Matt, “and you have ME and Pat…
Now let’s go rid those rats from Splazat!”

It was quite dark when they climbed the ziggurat.
Up high, they gazed down on Nat’s Sabbat,
They could even see the sorcerer Whinchat,
And all the destruction caused by the rat.
They saw no leaves on the trees of Splazat,
Nor did they see any bat habitat,
Or any trace of the nuisance gnat.

Some gnats and bats were hiding during the Sabbat,
So thought Matt and Pat and Tit-for-tat.
But the truth was just that the rats had nearly destroyed the bat,
And there were no signs left of the nuisance gnat.
There was little hope of redeeming the bat or the gnat.

The moon was bright on that dreadful night, the night of the Rat’s Sabbat,
As Matt and Pat and Tit-for-tat all stood atop the great ziggurat,
To watch Nat’s frat and wicked Whinchat celebrate her favorite rat.

This is the story of Matt Murat, a boy who lives in the town named Rata-tat-tat. Matt’s best friends are his cat whom he calls Tit-For-Tat and Pat, a lovely velvet winged bat that lives in Matt’s barn on their farm in Rata-tat-tat. The three go on a mission to rescue the poor bats and gnats of Splazat! The village of Splazat is ruled by a sorcerer, a rat, and his frat! On the very night that Nat and his frat are celebrating the Rat’s Sabbat, Matt, Pat the bat and Tit-For-Tat arrive to settle the score with Nat and his frat of rats. Sheer terror and mayhem await the brave trio after their cover is exposed! Whinchat dispatches her minions of rats to attack the intruders but the tables abruptly turn on them in this unforgettable and surprise ending to the “Villains of Splazat!”

The Villains of Splazat is, arguably, one of the most educationally stimulating and fun children’s adventure tales to come along since the writings of Maurice Sendak’s, Where the Wild Things Are and the tongue twisting tomfoolery of the Dr. Seuss’s books. The Villains of Splazat is suitable for parents to read to preschool aged children, as well as for older children to read for themselves. The Villains of Splazat is written in metrical form with alliteration using words ending in “at”, if you have not already guessed. Initially, the words are very easy, but grow in complexity throughout the story, which is why it can be enjoyed by a wider age range. When read aloud, the alliteration and increasing complexity of the words, which become challenging tongue twisters at times, make the book humorous and enjoyable entertainment for parent and child. It is also; however, an educational tool for expanding the vocabulary of children, and a large glossary is included to help with definitions and correct pronunciation. Have fun reading!

As author of children’s literature, Jesse Arrington III drew from two of his many unique careers. One as a teacher of preschool through middle school, and the other writing press releases and producing children’s educational programs during his career with the National Park Service, from which he is now retired. His pedagogical training began at North Carolina A&T State University at Greensboro with a Bachelor of Science in Fine Arts, and a Master of Education degree from the University of Alaska, Anchorage. Arrington matriculated at Warren National University for the Ph.D. degree. He has three sons, Blake, Christopher and Ian and makes his home in San Antonio, Texas.