Sex, Intimacy, Love, and Romance in Elderly and Alzheimer’s Patients 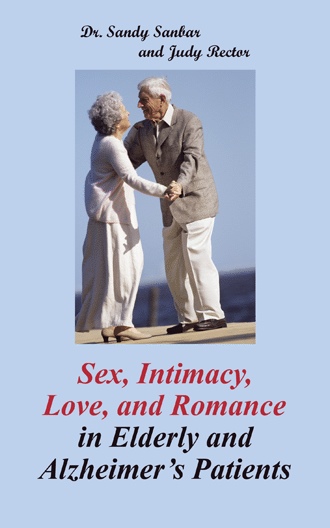 Mortimer asked, “Are there a lot of social activities for the residents?"
Sherry said, “Well, since my father has been at the nursing home, there have been generally weekly dances. I took Dad to a couple of those dances. We danced a couple of dances together. All the residents are encouraged to dance, whether standing or sitting in a wheel chair. Exercise is believed to be good therapy for them. The residents seem to have fun at those dances. They hug each other, and at times kiss each other on the cheek.”
Mortimer was curious. He asked, “What if couples want to go further than holding hands? Are they allowed to engage in sexual activity at the nursing home?”
Sherry said, “Apparently yes. This is one of a few nursing homes that has explicit policies regarding sexual activities?"
Mortimer said, "Sex policies! Why is that?"
Sherry said, "The aim of sex policies is to accommodate the residents' needs and desires. But equally as important, the policies protect them from predators who may take advantage of their vulnerable condition and situation at the nursing home.”
_______________

Alzheimer's sufferers who forget their spouses and fall in love with someone else is a scenario that is somewhat common.

John was admitted to the nursing care facility. He was initially unhappy and grumbling. So he was moved to another cottage area in the nursing home. Forty-eight hours after moving to his new area, he was a happy teenager in love. He struck up a romance with a woman, Kay, who had Alzheimer's.
When Justice Sandra visited John at his new place, he seemed happy. She saw his 'girlfriend' sitting with him on the porch swing holding hands. Amazingly, that was a relief for Justice O'Conner to see her husband so improved after a prolonged and painful period. She was not jealous about the relationship. Instead, she was pleased that her husband was relaxed, happy and comfortable at the center. She understood that people with Alzheimer's need intimacy and sometimes develop romantic attachments with fellow residents.
___________

It is not that unusual for people living in either assisted living or a nursing home to “find love.” Where patients still have an awareness of their declining state, they may long for companionship to make them feel connected, understood and alive. Few things make one feel more alive than romance, and when you know at some level that you have a terminal illness, the desire to battle back your fears of death with feelings of vitality and excitement are great. Romance is a good defense against anxiety about mortality.
________________

Annie asked, "Do you think that elderly couples enjoy sex as much as younger people?"
Sherry said, "I was surprised to learn from my reading that elderly couples may enjoy sex better than in middle age because they know each other’s bodies, feel confident, less timid, less inhibited, more relaxed, and more sensual."
Annie asked, "May I ask you if you and your husband plan when to have sex?"
Sherry answered, "I do not mind you asking. Mortimer and I have both planned and unexpected sex, which have been very gratifying."
Annie asked, "What do you and Mortimer do for romance?"
Sherry said, "We try to do a lot of fun stuff. I hope that romance between Mortimer and me will last forever. We holding hands, flirt and kiss each other wherever we are. Sometimes we enjoy showering together, massaging each other, and making out on the couch without going all the way. We may also enjoy sending each other sexy and naughty test messages on our smart phones."
_______________

Capacity to Consent to Sex in Alzheimer's

Every elderly person with or without Alzheimer’s has a right to determine what shall be done with his or her own body, including sexual activity. Intimacy and sexuality is a civil right that is no different than the right to vote.
_______________

"Two nursing home residents with Alzheimer’s disease and dementia were attracted to each other and had sexual encounters. The result was amazing. People’s lives were severely affected adversely including the nursing home officials and the couples’ families. The sexual encounters appeared to be consensual. When the woman's son was informed as well as the man's daughter, everyone seemed to agree that nothing needed to be reported to the state.
However, over a period of three years and continued sexual encounters, reviews by licensing organizations, administrative proceedings, and lawsuits were undertaken causing additional adversity. The state became involved. Consequently, the man was discharged from the nursing home, and the administrator and the director of the nursing were fired.
__________________

Sex at a Nursing Home between a Husband and his Elderly Spouse with Alzheimer’s Dementia: He was charged with Marital Rape and Found 'Not Guilty'.
__________________

Six Nursing Home Sex Stories
1. Resident Exposing Himself to Women Residents in Nursing Home;
2. Nursing Home Resident with an Indwelling Foley Catheter;
3. Two Women Lovers with Alzheimer’s, one Thinks the other is her Boyfriend
4. Attachment between a Resident and a Nursing Home Staff Members
5. Love and Sex Destroyed at an Assisted Living Facility by Family Member
6. Elderly Woman, 95, with Serious Dementia having Sex with her 26-Year-Old ‘Boyfriend’
________________

Sex Workers in Nursing Homes
There are sex workers who cater to elderly people of all ages including people with dementia and other disabilities. Sex workers are invited to the home of the elderly individuals, but others may go to nursing homes and other adult care centers.
_________________

When it comes to sex toys, the elderly and Alzheimer’s disabled people are not adequately catered for despite a demand from older and disabled people for sex toys. Often it is not clear which toys are most appropriate for disabled people or how they should be used. Some manufacturers provide ergonomically designed products which are remotely controlled, easy to grip, and easy to use by disabled individuals with limited mobility and dexterity or suffer from fatigue.

Although sex among seniors is generally not discussed openly, elderly couples affected by dementia frequently maintain physical intimacy, love, and romance. Sex, Intimacy, Love, and Romance in Elderly and Alzheimer’s considers the topic through the narrative of two women whose parents are experiencing dementia.

Annie and Sherry, both in their sixties and retired or semiretired, meet by chance at Lakewood Nursing Home in Wichita, Kansas. Their parents are both residents, and the commonalities between the ladies lead them to develop a close friendship. Together they share knowledge and experiences regarding elderly people and nursing home residents with dementia. They compile a series of fascinating stories about love, intimacy, romance, and sexual activity among seniors and Alzheimer’s patients. What’s more, Annie and Sherry have begun to deal with several serious problems and hurdles often faced by the elderly, further complicating their consideration of elderly issues.

Based on true stories and actual experiences, this novel explores intimate relationships and experiences of elderly people, particularly those dealing with dementia.

S. Sandy Sanbar, MD, PhD, JD, is a physician, biochemist, attorney, and adjunct professor. He served in the US Army Medical Corps from 1968 to 1970. A strong advocate for the elderly in a variety of issues, he is the author of more than two hundred articles and several books. He currently lives in [place].

Judy Rector, born in Oklahoma City, is also an advocate for personal behavioral issues of elderly people. She retired from a highly successful career as a business owner and chief executive manager and presently works as a KHM travel agent. She also designs jewelry and currently lives in Oklahoma City.