Your Food - My Adventure

One Farmer's Journey to Feed the World 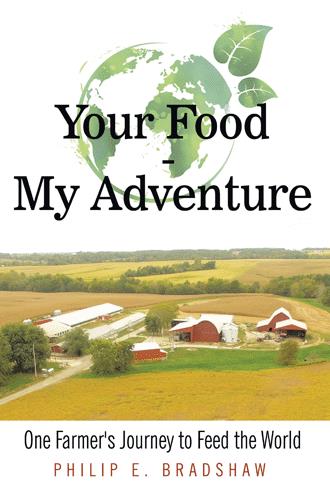 It’s funny what you remember about your childhood. I can’t tell you what grades I got on my report cards or how many points I scored in a basketball game. Most of my memories from my childhood involve my family and growing up on our farm in Pike County.

I can specifically remember when my grandfather got two Massey Harris 22 tractors and put cultivators on both of them. My brothers and I were getting old enough to start cultivating corn and grandpa wanted to make sure that he didn’t miss the chance to put us to work.

I can also remember back in 1947 the last time that we threshed wheat before we got a combine. I watched the guys hauling the shock bundles of wheat from the fields to the threshing machine. It was an impressive operation. The threshing machine left large circular straw piles beside where the machine sat to thresh the grain. The next spring my mom and brothers and I would plant cucumbers all around those straw piles and we’d pick cucumbers all summer to make pickles.

Like most other farmers in the Midwest in the 1940’s and 50’s, our family raised quite a bit of livestock – mostly cows, chickens and pigs. The livestock helped diversify the farm and provide another source of income. Although as a boy, I thought livestock was just something for me and my brothers to do to keep us out of trouble. My dad lived by the principle “idle hands are the devil’s workshop”, so we rarely had a time that we weren’t busy. I don’t ever remember telling my parents that I was bored. If I would have uttered those words, there would have been a pile of work for me to do somewhere on that farm.

My dad and his brother, my Uncle Walter, raised 1,000 to 1,200 pigs per year, which was a lot of hogs for the times. They raised them on the 20 acres that my dad had purchased along with our house when we moved out to the countryside in 1942.

It was a lot of work to get a pig ready to sell, so it was a big deal when the day came to load up the pigs and haul them to market. We usually hauled our pigs to the stockyards in East St. Louis. Most farmers would haul their pigs in their own trucks or ride along with the trucker to watch his livestock be sold. Farmers would stay overnight to see their hogs sell the next morning to a packer for processing. It also gave the farmers an opportunity to do a little partying in the big city.

As a nine-year-old I can remember riding along to East St. Louis with my Uncle Walter in grandpa’s two-ton 1948 Dodge truck. It had a sixteen-foot bed and hauled approximately 35 pigs weighing 225 to 230 pounds each. My Cousin Sam would often ride along. His dad drove and we would sit on a piece of railroad tie placed on the seat so we could see out the windows of the old truck.

The trip to East St. Louis from Griggsville was an interesting 110-mile journey along the highway that ran beside the Illinois River most of the way. The route took us through Alton, Illinois and there was a big hill in town that the trucks had to climb to reach the final destination of the stockyards in East St. Louis. The old trucks with their full load of market ready pigs would have to shift clear down to granny gear, the lowest gear, to make it up the hill. I could have run faster than that old truck lumbering up that hill. There were many times when I questioned if we would make it and worried about rolling backwards and seeing the pigs rolling down the hill.

This was a well-traveled route for many farmers from Illinois that were hauling pigs to East St. Louis. Every one of us followed that same ol’ route and the locals knew it. The slow-moving trucks filled with tasty pork chops and bacon was too enticing for some. It became a common occurrence for thieves to climb on the trucks and throw a 225-pound pig over the back, providing tasty pork for their families for many months.

In the Old West the term “riding shotgun” was coined to describe the person sitting next to the driver of the stagecoach to protect the passengers and to keep the precious cargo from being stolen. As the hog trucks approached Alton, often times someone would get out and “ride shotgun” in the back of the truck to dissuade anyone from stealing one of the precious pigs.

My Uncle Walter told a story about a man riding in the back of the truck carrying a baseball bat. When the thief put his fingers over the side of the truck racks to pull himself up, the man hit the thief’s fingers with the bat. It only took a few swings and that took care of the problem.

I thought of those pigs being escorted to market as Johnny and I drove up an incline entering Mexico City in the dark. We would have given anything for an escort to our final destination – a supposedly nice hotel somewhere in Mexico City. As we neared the city, we noticed two police cars began to follow us. My first thought was here we go again with the so-called inspection. Both police cars pulled alongside of us. I cringed and tensed up as I braced for what was next, but the most amazing thing happened.

Rick Marrs, Ph.D., has been a soul care provider for decades, first as a Christian counselor and licensed psychologist, then as a pastor and seminary professor. He has taught Christ-centered soul care to thousands of counselors and pastors. “Phil Bradshaw and I are both Illinois farmers who share a passion for the land and a desire to help feed a growing global population. I have had the pleasure of working with Phil on many issues during my career, especially while serving as the US Secretary of Agriculture for President Ronald Reagan’s administration. Phil has always been a champion for agriculture, traveling the globe to improve the lives of people. A lot of misinformation about food and farming exists today, this book gives a factual, firsthand perspective on food production and will give you a better understanding of today’s farmer.”

Philip E. Bradshaw shares stories and recollections from a lifetime of farming in this memoir that celebrates a way of life.

He highlights the advancement of farming and reflects on his efforts advocating for agriculture, serving as a leader, and policymaker, and traveling to more than 53 countries and meeting seven U.S. presidents along the way.

Born on a family farm in Pike County, Illinois, he grew up during the turbulent 1940s and 1950s amid cows, chickens, and pigs—taking trips to Mexico and helping haul dozens of pigs at a time to the stockyards in East St. Louis in a truck.

The author reflects on everything from the importance of international trade, starting his own career in farming, serving in the Army Reserves during the Cold War, managing his money, and meeting his future wife, Linda Bradburn, while speaking about farming at a meeting for young adults.

He provides a meaningful historical perspective on how food production has progressed and explores where it is headed in the future—all while celebrating the importance of good living and helping others.

Philip E. Bradshaw has been a farmer for more than fifty-five years. He has experienced numerous agricultural changes, from farming with horses to using machinery with satellite guidance systems. He has served as president of three major state and three national agricultural organizations and has served on advisory committees and/or boards for six U.S. secretaries of agriculture. He and his wife, Linda, have three children, seven grandchildren, and four great-grandchildren. They live on their farm in Pike County, Illinois.