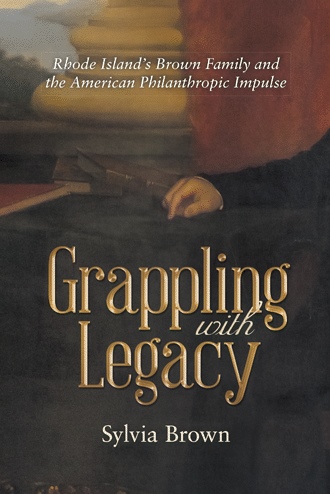 During the Thanksgiving holidays of her childhood, Sylvia Brown did homework at a large mahogany desk in the front parlor of her grandparents’ house in Providence, Rhode Island. In May 1989, her father sold this spectacular colonial desk for a world record $12 million in order to restore his ancestor’s 18th century National Landmark home. In 1995, he donated the renovated house and an endowment to Brown University. At the time, Sylvia viewed this gesture simply as maintaining a 300-year family philanthropic tradition.

Less than a decade later, however, the University’s new Steering Committee on Slavery and Justice held its inaugural symposium. One of the speakers stood before the capacity crowd and declared, “there were no good Browns.” Grappling With Legacy was born of the juxtaposition between these starkly opposed perspectives.

Sylvia spent more than a decade delving into one of the country’s largest family archives to understand what fuels a multi-generational compulsion to giving: Self-interest? A feeling of guilt? A sense of genuine altruism? The Brown family mirrors America’s evolving urge to do good, from Colonial era charity, to reformist initiatives in the Early Republic, to the philanthropy of the Gilded Age, to social impact investing today.

Most Americans believe that modern philanthropy emerged from the fabulous riches of the Gilded Age. Yet well before Andrew Carnegie encouraged successful businessmen to build “the ladders on which the aspiring can rise,” this principle was originated in the nation’s smallest state by the Brown family.

Community leaders from the time of Rhode Island’s founding, they excelled at maritime commerce in the Colonial era and in the golden age of the China trade. They were pioneers of the American Industrial Revolution and engaged in many of its ancillary activities – banking, insurance, real estate and transportation. With commercial success came an ardent desire to be considered ‘Gentlemen of Public Responsibility,’ so they adorned their hometown of Providence with buildings, churches and a university.

Sylvia anchors her tale around Nicholas Brown II (1769-1841), an emotionally complex individual who lived during fascinating but troubled times when the new nation was defining itself. In him, we find the timeless tensions between a yearning for order and a concern for those less fortunate; between resistance to changing times and radical ideas for improving society; between authoritarian parents and defiant children. Deeply affected by his childhood during the Revolution and the deaths of nine siblings, he watched in anguish as the orderly hierarchies of Colonial society dissolved in the upheaval of industrialization, urbanization and immigration. In reaction, he poured his wealth into institutions that provided society with a moral compass. Above all, he instigated the modern notion of a university as a force for good. The story still resonates today of a tenacious business man, steeped in traditional paternalistic values, who became a humanitarian.

This rich family saga is set against the backdrop of Rhode Island, the nation’s most idiosyncratic state. Despite its small size, Rhode Island has played an exceptional role in American history: as the first entity in modern times to allow full religious freedom; as a leader in 18th century maritime commerce, including slave-trading; as the first colony to declare independence and the last to ratify the Constitution; as the birthplace of the American Industrial Revolution; and as the most urbanized American state in the late 19th and early 20th centuries. Once called “the latrine of America” for its non-conformist attitudes, Rhode Island to this day is defined by its individualism and feisty spirit of independence. One of the state’s founding families, the Browns embodied these attitudes.

Grappling with Legacy provides a fresh perspective on the nation’s early years, an era frequently overlooked yet surprisingly akin to the present day, characterized by economic dislocation, partisan politics, growing social disparities. Out of this turmoil emerged America’s philanthropic impulse, which has become such an intrinsic part of our national ethos.

Sylvia Brown, eldest of the 11th generation of Browns in Rhode Island, was attracted to development economics from an early age. Following her Master’s degree at the University of Pennsylvania, she pursued a professional career in various aspects of international development, from Wall Street to the UN High Commissioner for Refugees. Ten years ago, a course in strategic philanthropy redirected her focus to the non-profit sector and eventually prompted a return to her Rhode Island roots. She has recently launched Uplifting Journeys, offering immersive donor education in locations around the world.

“This is a fascinating and intellectually honest work about a remarkable family that has played a major role in the history of Providence and Rhode Island. Sylvia Brown has made a tremendous contribution in writing this wonderful book. It is clearly a labor of love, and we should all be grateful to her for it.”

“A splendid work of history---an honest, clearly written, and solidly based account of the private and public lives through four centuries of one of America’s most important and fascinating families.”

What fuels a family’s compulsion for philanthropy? Self-interest? A feeling of guilt? A sense of genuine altruism? Charitable giving is such an intrinsic part of American culture that its story deserves to be told, not in a dry, academic tome but through the tale of a colorful, multifaceted family.

Since 1638, the Browns of Rhode Island have provided community leaders in one of the nation’s most idiosyncratic states. In the 18th century, they excelled at maritime commerce, were pioneers of the American industrial revolution, and adorned their hometown of Providence with public buildings, churches, and a university. In the 19th century, they pioneered the modern notion that universities can be forces for social good. And, in the 20th century, they sought to transform the human experience through great art and architecture. Over three hundred years, the Browns also wrestled with society’s toughest issues–slavery, immigration, child labor, the dispossessed–and with their own internal family tensions.

Author Sylvia Brown tells the story of the ten generations of Browns that came before her with warmth and lucidity. Today, in an era of wealth creation and philanthropic innovation not seen since the Gilded Age, Grappling with Legacy provides fascinating insights into a unique aspect of America’s heritage.

The eldest of the eleventh generation of Browns in Rhode Island, Sylvia Brown earned BS and MA degrees at the University of Pennsylvania. Her career ranges from Wall Street to the UN High Commissioner for Refugees to strategic planning for small charities. She recently launched Uplifting Journeys, offering immersive donor education in locations around the world. She has two grown children. She and her husband, Andrew West, divide their time between Providence and London.