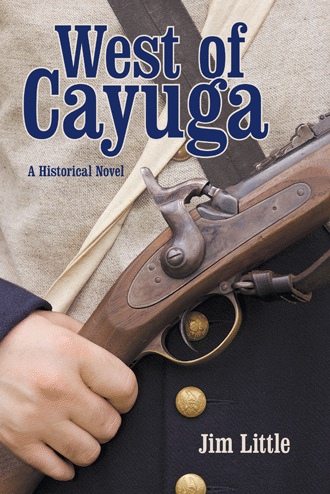 The black clouds were rumbling closer as he cautiously approached the farm of Sam Cooper just before midday. Not knowing what to expect he walked slowly up to the split rail fence which surrounded the house, keeping an eye out left and right. Beyond the house was pasture where a few cattle and sheep grazed quietly, taking no notice of the light wind that began to blow. A large barn sat off to the right filled with hay and oats. “Rebs, coulda used that,” he thought to himself. He had his hand on the latch for a while before he decided to take a chance on walking up to the low plank porch. As he lifted the wooden latch, a defiant but nervous voice rang out.

“What you want, boy?” Sam Cooper shouted. “Best you get along now. Don’t wanna hurt nobody”

“Just want to talk. That you Mr. Cooper?”

“Who wants to know?”

“Jebediah Shoemaker.” He could hear a female whimper from inside.

“Then you’d be coming for the woman.”

“Yassuh, yassuh. Ain’t your slave no more. She’s my wife and I come for her,” he said resolutely. “I’m comin’ in now. Don’t you shoot. I just want her,” he said showing his palms to Cooper to show he was unarmed. His voice changed to calming. “No need for any killin’. Ain’t no more slaves no more,” he said softly ten feet from the porch. “War’s over. Ended just up the road yonder. Know you heard about it.

“You ain’t takin’ the woman,” he shouted as he raised the musket and sighted down its barrel. “You’re a dead man if you don’t turn and go away.”

Jebediah stopped just short of the porch. “I ain’t goin’ without her.” He could hear Samantha inside crying and moaning, causing Cooper to glance to his right long enough for Jebediah to lunge at the door. At the same instant Cooper pulled the trigger the weapon was thrust upward from behind. The ball struck a glancing blow to the black man’s shoulder which spun him around, but he recovered quickly taking no notice of the wound. In an instant he was on the white man struggling for possession of the musket, falling bodily inside on top of him. The men rolled over the floor, then worked their way to standing, each trying to force the weapon into the throat of the other.

Cooper was a large man, about the same age as Jebediah, but was overweight and out of condition. Still his bulk was enough to sling the black man around the room while both held on to the weapon. Broken furniture and fixtures flew about them forcing Samantha to jump out of the way. Jebediah was fit and stronger so finally was able to yank the musket from Cooper and throw it against the hearth.

His eyes reddened with anger as he grabbed the white man around his wide throat, choking him with every ounce of strength he could muster. Cooper’s eyes began to set and his body was becoming limp. Somewhere from far off Jebediah could hear a voice, “Jeb, stop, stop. Don’t hurt him. Jeb, oh Jeb,” and he recognized it finally as his wife’s voice crying for him to stop as she pulled at his arms to let Cooper go.

He could see her face come between his and Cooper’s as she said softly. “That’s enough, now. Jeb, that’s enough” she assured him. Jeb calmed completely then, relaxing his hold on Cooper. The white man stumbled back to the foot-high hearth clutching at his injured throat, coughing and spitting blood onto the braided rug. Jebediah stood over him with his hands at his side, ready just in case.

“They told me you were dead,” Samantha sobbed as she grabbed her husband with both arms between the two men. “Told me you got killed in the war.” She could feel his arms encircle her but then relax. She looked into his eyes and quickly realized he was about to lose consciousness. He staggered backward with his woman holding on as she guided her husband to a chair behind him. His clothing was wet with perspiration and he was having some difficulty getting his breath.

“Oh, no, Jeb, Don’t die on me. Don’t leave me now!” she exclaimed softly while wiping his face with her apron. “Jeb, Jeb Honey?” she called trying to get his attention. Jeb blinked dizzily and tried to put his hand to his face but it fell back to the arm of the chair. Perspiration covered his face and brow. Samantha studied his face and checked over his body for unseen wounds. She ran to get a wet cloth.

Jeb began to wake some and was able to slowly focus on the scene. He shook his head and could see that the room was a shambles where the two men had fought. The boy was sitting beside his grandfather, Sam Cooper was still sitting on the hearth where a morning fire was dying away, and he held a Navy Colt at arm’s length pointed directly at the black man.

The boom of the revolver shook the entire house so much that Samantha was thrown, or scared, into the cupboard. She screamed and instinctively put her hands to her head, then ran from the kitchen to find nothing moving except blue smoke which filled the den. The boy stood stiffly beside Sam Cooper who was still sitting on the hearth. Jeb sat with eyes wide open not moving.

Green Little is a Quaker farmer with a conflicted passion for drinking and fighting. Thanks to a bond with an unlikely friend confined to servitude, he has somehow survived. As Green, his wife, and their children try to begin a new life, he must leave his friend behind. As the years pass, his family becomes larger, while the possibility of a Civil War grows greater, Green is about to discover that fate will play an even bigger part in his life than he ever imagined.

Meanwhile, Old Jeb is battling just to survive in the pre-war South. In an effort to protect his wife and five children from constant threats, he reluctantly leaves his beloved family behind and escapes to Indiana to establish a trade, hoping his wife and children can soon follow. When he joins the Union Army in an effort to find his family again, he has no idea that Green’s has joined up to fight for the Confederates. As the two men arrive at the battle of Gettysburg via separate roads, their destinies await.

West of Cayuga shares the historical tale of two friends—one white and one black—as they embark on separate journeys of survival during the Civil War era.

Jim Little is a retired businessman and avid historian who has spent many years researching the rich military history of his home state. He is the author of Fathers of the Greatest Generation: Nothing between Heaven and Hell, a true account of North Carolinians in the Great War. He currently resides in North Carolina. West of Cayuga is his debut novel.