Lessons from My First 40 Years 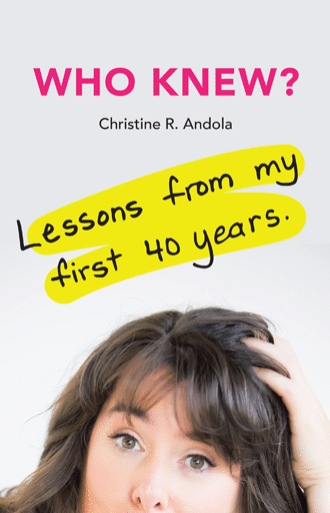 I took that college degree I didn’t want off into the world with high expectations, and so began the blaming years, which stretched well into my thirties. I’m not sure if the concept occurred to me on my own, or if the idea was planted by some well-meaning therapist. But I spent several of my first 40 years blaming my parents - for everything!

The blaming years went well beyond that illusive genetic connection (why did I have to get my father’s big nose.) Actually, it was the physical traits I couldn’t complain about. I am descendent from two generations of overweight people, yet I inherited shapely legs from both sides of the family (no tree-trunk legs here.) And I got my maternal grandmother’s thick hair and my father’s long fingers while avoiding short stature on both sides of the family and the northern Italian coarse hair.

No, the blaming was about everything I was not and everything that went “wrong” in my life. I spread the blame equally between my parents, Mom for dying and leaving me with her husband and children to deal with and Dad for not parenting me in her absence. I even threw some blame at society in general for leading me to believe that marriage would be easy.

I did everything that was expected of me - the big white dress, the traditional wedding, the handsome groom, the first family Christmas in our new house - but nobody bothered to tell me that just looking the part wouldn’t be enough. It worked in all the movies but not in my life.

Once those rose-colored glasses were off and I could see that my family wasn’t the perfect family-next-door, I set out to find out, “why me?!” Suddenly I could see every flaw my parents had, every mistake they made. It was their fault. How could two professional educators do such a poor job of raising a child? And if they didn’t know any better, what chance did everyone else’s kids have of turning out to be normal, happy functioning members of society?

Oh, family had definitely failed me. I was the innocent and naïve victim in all of this. I did what they told me. I believed what they said. I followed our house rules, practiced our family traditions, sat still and quiet. I wore sneakers only for gym class, kept my shoes on at the dance. I made my bed every morning and helped clean the dishes after dinner. I watched out for my sisters, walked the dog when it was my turn, cut the grass when asked to. I went to college (though I had no idea what I was doing there) and came home with a degree.

So why couldn’t I have a happy marriage, a full-filling career, a normal family? Why was I still afraid of the dark? Why didn’t my in-laws like me? Why did I hate being a teacher? Why did I spontaneously burst into tears sometimes in public? Why didn’t my family act like the ones on TV? Why did I feel so separate from everyone?

All of those questions have rather long intricate answers, none of which are really germane to this particular discussion — lucky for you! After spending several years blaming my parents for all of the evils in my life, shortly before approaching the end of my first 40 years, I had an epiphany. It wasn’t their fault!

My parents were good people who loved me very much. They did their best to raise me to be an intelligent, independent, conscientious woman, and for the most part it worked. My parents gave me the love and support and the material comforts they believed would benefit me in the long run. After nearly 40 years on this planet, it was time for me to take over.

It is my responsibility to nurture myself as an adult. No more crying over “should’ve” and “could’ve”. I have the ability to make my life whatever I want it to be. Of course, it is not as easy as it sounds, but that is the rightful order of things. Adults take responsibility and create their own happiness, set goals, make changes, re-evaluate and move on. My mother once told me that it was not important to marry a successful man because working toward success together was really what made life fun. She knew that life was in the striving, not the arriving. (And here I had spent the better part of 40 years choosing an outfit for my arrival.)

“We all simply want to be happy!” In her years of imperfect living, writer, consultant, and inquisitor of human behavior Christine Andola constantly sought to achieve just that. In “Who Knew?” Andola shares candid anecdotes and real life lessons learned from years of complex family dynamics, awkward social missteps, marriage gone wrong, grief and death. She reflects on the agonizing and inspiring cold hard facts of life with idealism and a quirky sense of humor--sharing with the reader just how she has achieved a new and potent definition of happiness after 40!

“I found Christine’s book to be a no-nonsense yet humorous description of a woman who has come to terms with her past by taking charge of her present. Our families influence us, but we need to take responsibility for our own choices and consequences. This is an easy-to-read “how to” book to help us learn how to grow up.”

“For anyone who is reaching a milestone or anticipates one, this book will remind you that you’re not alone and that accepting who you are and moving forward to embrace your best self is everyone’s challenge. Thanks, Christine, for putting it out there and for reminding us that life’s challenges are universal.”

“She’s a great writer and I loved several of the thoughts/lines buried throughout the book. Some made me laugh. Some had me shaking my head in recognition. Some had me thinking a bit.”

Christine R. Andola is a freelance writer and native of Central New York whose work has been published in several regional and online magazines. She writes about food, health, business, and other topics. Christine has lived in the Southern Tier, the Hudson Valley, the North Country, and New York City, and has traveled a good portion of the Erie Canal. Who Knew? is her first book.