Odyssey of the Chosen 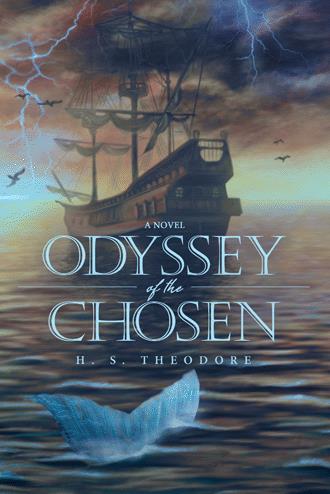 Sam was crying, trembling now, unaware that Jayden was still by his side, no doubt locked in his own indescribable struggles. Finally, he realized that he was now standing at the mouth of the Cave of Echoes, though he had no recollection of how he got there.
And why had he come in the first place? He knew there was a reason; he just couldn’t seem to connect to it.
When Sam closed his eyes, the pain, the madness, and the din increased a thousand-fold. Sam dropped to his knees and felt the darkness pressing in around him so violently that it crushed his chest, stole his breath. It was squeezing the life out of him. The cave became a voracious black hole, sucking every one of his thoughts and memories from his mind, as if he had violated the unforgiveable boundary of an event horizon, a place where everything was taken from you and nothing was given in return. A place of unceasing forfeit.
Sam was powerless to fight back, as his strength to do so had been sapped and drained into this unbounded abyss.
Breathing simply required too much effort. He realized the only sensible option was to willingly give himself over to his captor. It wasn’t an ideal option, but it did seem the quickest and easiest way to end the pain. Besides, it was now inevitable. Just a few more seconds and the process would be complete. Just a few more seconds and Sam would become forever commingled with this singularity. Just a few more seconds and his eternity would begin.
…Somewhere else.
Somewhere far, far away.
An offering. A sacrifice. A trade.
A tacit, unspoken agreement, an exchange, one for the other. Quid pro quo. It may have been happening a billion light years away or maybe even a trillion.
Spare the father, take the son.
“I’m the one you want, not him. It’s me you want. Take me instead," shouted Jayden. “Release him at once!”
But, it didn’t work that way. For Sam, the process had already begun, and it would continue uninterrupted. There would be no deals, no trades, and no exchanges. The cave was not interested in a bargain. It cared only about the heist and the theft of everything that made someone . . . a someone.
To see Jayden from afar was to see a nearly lifeless teenage boy standing stock-still. Oh! But to see beyond the veil. Jayden loosed a blood-curdling roar that seemed to push back against the cave’s power and momentum, an equal and opposite force. The youth was seven feet tall, well-muscled, and clad as a warrior, all happening in another dimension. If the cave would not take him willingly and release his father in exchange for him, then he meant to FORCE . . . THE . . . ISSUE!
Jayden would not be denied.
He stood between the cave and his father, not in this realm, but in a faraway dimension. He held his ground and would not give an inch.
An exchange. An offering. Propitiation. A willful submission too good to pass up.
And then a voice from somewhere, an indistinguishable part of something eternal.
“Now hear me well. My father is not for sale. He is not expendable. My father is spoken for. He belongs to me!”
Message received.
The cave relented and abandoned Sam. It then turned the full fury of its attack against Jayden.
Apparently, two parallel lines could meet. Two parallel beams would converge if something had enough energy to forcibly warp space and time, evicting Euclid and his geometry in favor of Reimann and his.
Sam was back from the brink. He had no idea what had happened or how he had recovered, or even how far gone he had actually been. All he now knew was that he stood before the Cave of Echoes. And he knew his purpose. He remembered the question. But Sam was alone now, and he knew that too. Though he couldn’t say how or why, he knew Jayden was gone, really gone. And so . . .
He pressed on.
Alone.
Sam sucked in a deep breath and shouted with all his might, “What must be done to defeat G.G. SPALE in the upcoming battle?”
And then, for Sam, the world became deathly quiet. No sound, no light, nothing. Heard faintly at first,and getting a little louder each second, were the sounds of his own breathing and the beating of his own heart. Birds were chirping in their nests nearby. Leaves gently rustled as the breeze passed through the trees.

Jayden stood with a vacant look on his face. Oh, but if you could only see beyond the veil, if you could only see things from his perspective . . .
Suddenly, his world erupted in a kaleidoscopic explosion of light and sound. What played out before him overwhelmed, saturated, and strained every one of his senses. It was as if a sword of truth had pierced Jayden’s heart.
Once again, the cave had chosen wisely. Why not reveal its secrets to one who would never be able to share them? Locked away in the sealed and unreachable vault of Jayden’s mind, the cave’s answer had been passed from one inaccessible source to another, to be kept eternally safe. It was the perfect exchange. Wisdom revealed, and yet . . . not. Equally well hidden, not in the cave itself, but in a mind entombed by the cave’s unyielding torments. The mental catacombs of a young man. A cerebral graveyard.
Jayden’s body jolted as if struck by lightning, his psyche forcibly implanted with unspeakable revelations. He could not tell if the answer had been revealed in seconds or hours. But he knew one thing for sure—he understood what was needed to defeat G.G. SPALE.
But what did that matter now? Jayden’s mind was not reachable. Even if he could share what he had just experienced, he doubted if even Lammanort had the power to pull off this plan. In fact, he doubted that Lammanort would even understand it. Jayden certainly didn’t. None of this matters. His body fell limp upon the ground.

Sam has good intentions when he takes his teenage children out sailing on the Atlantic. Rachael and Jayden couldn’t be more different; their arguments prove as much. Rachael thinks her little brother a coward, while Jayden knows he’s something special—even if the past still haunts him and his entire family, their mother Abigail included.
They set off for adventure, but when the sailing trip takes a turn for the worst, the entire family becomes embroiled in a war where they face supernatural enemies with preternatural power. Forced to believe in the unfathomable, they are led to destinies unknown to them but known to otherworldly creatures—one of good and one of pure evil.
As battle ensues, the world’s balance teeters on the shoulders of mere children. However, Jayden and Rachael soon learn they are the Chosen, spoken of in ancient prophecy. Terrified, the children resist, but can anyone run from their predestined fate? Everything hangs in the balance, and what began as a day on the water is now a fight for the future.

H. S. Theodore is a theologian, doctor, writer, and scientist. As such, he blends his unique and explosive ideas into stories that thrill.