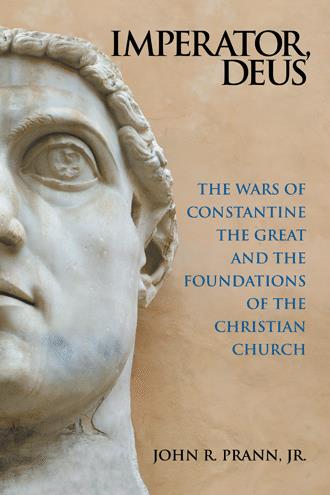 It is 312 AD outside ancient Rome as Emperor Flavius Valerius Aurelius Constantinus Augustus stands above the Tiber River and watches his enemy, Maxentius, and over one hundred thousand soldiers cross Milvian Bridge and take position on the battlefield. Unfortunately, forty-year-old Constantine no longer feels like the invincible god his enemies and some friends believe he is. But as he stands in the midst of a civil war, Constantine knows now is not the time for doubts.

As he capitalizes on his opponent’s smallest mistakes and executes strategies that reflect his perception and genius, Constantine brutally battles within two global wars that not only include Maxentius, but also several other enemies with large forces. While he consolidates his power on the battlefield, Constantine must fight the fissures within an emerging Christian Church controlled by two popes and countless bishops. But as Emperor Constantine grows older and becomes a devoted father, battles erupt within his own family that lead to dramatic changes.

Imperator, Deus shares the fascinating historical tale of the first Christian Emperor of the Roman Empire from his victory at the Milvian Bridge in October 312 AD to his death twenty-five years later.

John R. Prann, Jr. is the former CEO of a NYSE-listed company and past member of several corporate boards. His interest in Christian history first began developing when he was a graduate student at the University of Chicago. John lives with his wife, Cheryl, and their ferocious miniature Schnauzer, Pepper, on Sanibel Island, Florida. Imperator, Deus is his first book. He is working on his second novel.