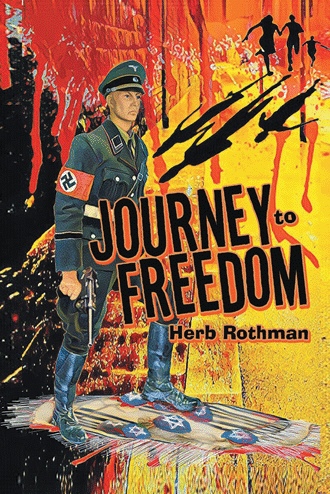 After speaking to Mordechai, Sorrah went home and packed a suitcase of clothing for her and the baby. She went into the kitchen, looked under the sink, and removed the metal case from in between the pipes. When she opened the case, she saw that it did, indeed, contain five hundred Reichsmarks, three thousand Polish zlotys, and a German passport with her picture in it but issued to a “Sonje Richter.”
The forger had made up the name and identity of a high-ranking Nazi official, SS Obersturmbannfuhrer Klaus Richter, who was supposed to be an adjutant on Heinrich Himmler’s staff. It was hoped that, if Sorrah encountered any difficulties with her papers, a mention of this name would smooth the way for her. Sorrah practiced saying her new name and that of her “husband” over and over, so as to be fluent with the information if and when she was asked for it. The forger has been clever in selecting an alias beginning with the letter R, in case Sorrah carried any monogrammed clothing or jewelry.
She left the house from the back garden door, because it opened onto a side street that didn’t face any house fronts. From there, it was only a short walk to the Altona railroad station. Sorrah went to the ticket sales window. “I would like to purchase a one-way, first-class ticket to Berlin on the Fliegender Hamburger and a transfer ticket from there to Neu Bentschen,” she told the ticket seller.
On May 15, 1933, Germany’s first high-speed diesel train, the Fliegender Hamburger (Flying Hamburger), was introduced. The train had an average speed of seventy-six miles per hour and was the world’s fastest scheduled rail service.
“May I see your passport and travel documents, please?” It was a reminder that, even inside Germany, Jews were no longer permitted to travel.
“Here they are. Do I look like a Jew to you?” Sorrah replied with hauteur, while inwardly quaking with fear.
The clerk glanced at both her passport and her documents. “I am sorry, Fräulein. Your papers seem to be in order. What business do you have in Berlin?”
“Do you see that I have a child with me? I am not a fräulein, unless you think I am a woman of loose morals. You will address me as Frau Richter or not at all. The business I have in Berlin is my business and none of yours. Either you sell me the ticket, or the next trip I make will be to Gestapo headquarters to report you. You obviously don’t know who my husband is or you wouldn’t even be asking me these questions.”
“I apologise, meine Frau. We are required to ask these questions of all persons going to Berlin. There are a lot of insurectionists traveling to the capital. And, of course, I know who your husband is. I didn’t think that you were that Frau Richter. Here are your tickets. Do you require someone to help you and your beautiful daughter to the train? It is leaving on track 23.”
“No, thank you. I can manage on my own.”
“Again, please accept my sincerest apology and have a safe trip.”
As Sorrah made her way to the train with Miriam in her arms, she spent only a moment congratulating herself on her first performance as Frau Richter. Her thoughts immediately turned to Yehuda and how he was faring.

Yehuda Roitmentz is a boy growing up in pre-World War I Germany. His father is one of the few Jewish officers who served in the Kaiser’s army. His mother and uncle are determined to instill in Yehuda all the knowledge and traditions of his Jewish religion. He grows into an ambitious, well-educated man who takes over his father’s clothing factory and makes it thrive.

However, everything changes when the Nazis come to power. Life becomes stressful, difficult, and even dangerous as anti-Semitic laws make earning a living almost impossible for Jews. Yehuda is soon forced to manufacture uniforms for the German army, even as he joins the resistance movement in the hopes of disrupting the Nazis as much as possible.

Yehuda’s resistance earns him a place in a concentration camp, but he is able to flee to Poland. Now, he must find a way for his wife and their baby to travel across Germany to join him. How can one man stand up to the Nazi agenda—especially when the Gestapo has put him on their Most Wanted List? It will take ingenuity, heroism, but most importantly, love to triumph over those who wish him dead and to find the freedom he seeks.

For the past quarter century, he has been President and CEO of American Talent Management. He lives in the Gramercy Park section of New York City with his wife of forty-five years.