On a Long Journey to Theatre 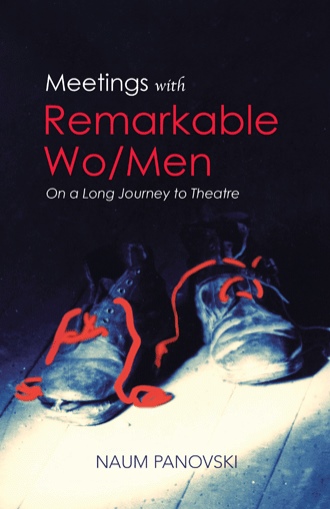 Theatre is a Devil’s Art or the
Idea of a Changed Human Being Who Always Above All Looks Human
(From the conversation with Robert W. Corrigan. August 1987. Dallas, Texas.)

Robert W. Corrigan:
Well, the reason that I've taken such a strong stand about the relationship of the family to the theater, is because when I look back throughout the history of the theater I see that the chief mysteries that the theater seeks to make present and reveal are those that have sources that are in family life. And, indeed, I would say that for each one of us, as human beings, the conflicts, the meanings, the mysteries of our lives have their roots in the family.
Therefore, if you look back, beginning with the Greek theater, in 3rd century plays have their roots in the family. And if you notice, it is the house of Atreus; it is a house of Laius. It is the family of Laius. In Agamemnon for example, when he comes back to the house, he is there celebrating the return to the house and the reestablishment of the house, although he goes through tremendous struggle that he had anticipated, but nonetheless there at the center is the house. I think you can go to Shakespeare’s Elizabethan theater, you can go to the theater of Racine, and finally to the 19th and 20th century theatre, and you can see the same thing, that the family is there at the center of the society.
And to directly answer your question, as the family and the idea of the family changes through the history, I would say obviously, it certainly does, it is reflected in the theater. And the idea of the family therefore will be changing, and the whole definition of family will be changing with it.
So, when you say, when we speak of family do we think of it as a social community, of course we do, but no matter how social and how big the community is, it changes. So, I would think that in terms of classical Greece the family and the idea of the house, was a much bigger idea than it is in the contemporary bourgeois society where the family is a small self-contained unit. But even as I say that, I realize that's no longer really true. Today we live in much more extended families than that, and it's hard to call it home-rooted anymore, because more and more people divorce, there are more and more brothers-in-law and sisters-in-law, more and more half-brothers and half-sisters.

As a result, the family is no longer defined really by a mother and a father and the children living at their home. All those changes, it seems to me, are reflected in the theater. And, as our sense of the family changes, as our experience of familiar life changes, therefore as our conflicts in our life change, all these things seems to me are reflected in our theatre as well. I think you can see for example just by comparing all these changes, if you compare the family, the sense of family let’s say in an Ibsen Play and the sense of family in Shepard’s Buried child, there is a big shift in the sense of definition of family and a big shift in how playwrights can give form to the conflicts.

There's no question that there has been a sense of disintegration of the individual as it was once conceived. But I have a feeling that that process of the disintegration of the idea of the individual is something that happens many may times in history in different ways, that the idea of the person that not being able to be divided and then discovering that we can divide the person, is something we see constantly repeated. For example, certainly one of the things we thought about the 19th century and the whole rise of the modern technology is it somehow, that it alienated ourselves from it ourselves, from each other, and that it finally leads to disintegration of the self. There is no question you can talk about that abstractly you can write plays about it and try to show it, but I will argue that for the most part, we as individuals experience our lives and ourselves as not disintegrated. Even though it may be an allusion that we're kidding ourselves I think my life most of us live most the time as if there's a sense of wholeness in our being that we experience it as a whole.

Many artists share the conviction that the theater is a collaborative, multicultural art that stands as a heartbeat of the community trying to find relevant answers to the fundamental questions of our existence.

Offering a variety of perspectives, Meetings with Remarkable Wo/Men focuses on the work of a handful of extraordinary theater artists and innovators. It gives priority not to interpretations of their work, but rather to their words and voice, to their views and ideas. In so doing, it addresses various issues, ranging from arts and politics to history, philosophy, culture, identity, and memory. In an immediate, simple, conversational way, it explores the development of the most influential models and movements in theater and performance in the last fifty years. Most importantly, it underlines the notion that it is the quest for our humanity and our human condition that matters the most in creating art.

Naum Panovski is a professional theater director, writer, a professor of performing arts, criticism, theory, aesthetics, and humanities. Panovski is a Fulbright Expert and Scholar as well.
He was born in Skopje, Macedonia, then part of former Yugoslavia, and graduated from the noted Academy of Theater, Film, Radio, and Television in Belgrade. Later, he studied at New York University’s Tisch School of the Arts, earned a Master’s Degree in Dramatic Arts from the Faculty of Drama in Belgrade, and a Ph.D. in the Humanities from the University of Texas at Dallas.
During his long professional career in theater, he has worked as a director or a dramaturge on more than ninety productions performed in theaters in Bosnia, Croatia, Slovenia, Serbia, Macedonia, Italy, France, Russia, Bulgaria, Turkey, Poland, or U.S.
As a professor of aesthetics, criticism, theory, literature, culture, arts and society he has taught and lectured at The University of the Arts, Lee Strasberg Theater Institute, New York University, Yale University, The Catholic University, Lincoln Centre, Smith College, Bentley College, La MaMa Symposium in Spoleto, Faculty of Dramatic Arts in Belgrade, and many other institutions.
As a theater critic and writer, he has authored two books, Directing Poiesis and Theater as a Weapon and has written numerous articles published in theater and performance journals worldwide. He has also presented his work in conferences, panels, and symposia; served on boards, and held various artistic leadership positions.
Naum Panovski is a recipient of many distinguished awards for his creative work, and he is internationally recognized. The Master Thesis “Hamlet our Contemporary - Panovski’s Production” discussing his cross-disciplinary and multimedia vision of this seminal play written by Ms. Aurelie Clemente Graduate student M. A. candidate was submitted to the Universite Paris VII Sorbonne - UFR d’Etudes Anglophones in September 1996,
Naum Panovski’s work was inspired by the theories and practices of the experimental theater of Adolphe Appia, Vsevolod Meyerhold, Bertolt Brecht, Antonin Artaud, Peter Brook, Joseph Chaikin, Richard Schechner, Tadeusz Kantor, Carl Weber, Robert Corrigan, Mata Milošević, and Mirjana Miočinović.
www.naumpanovski.net