About Joaquin Miller, Ambrose Bierce, and the Real Black Bart 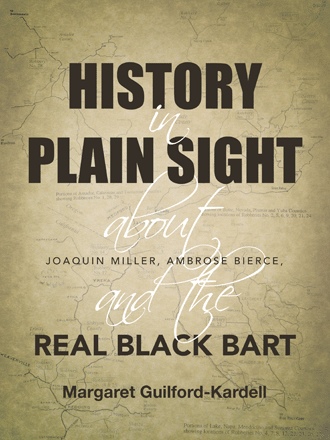 My grandfather said, that when Boles was arrested he said they could call him Charles E Boles, or Charles Bolton, or whatever they liked.

Who really was Black Bart? While he was a notorious nineteenth-century bandit known for robbing stagecoaches in gold rush California and Oregon, Black Bart’s true identity is still cloaked in mystery. After being jailed in 1883 as Charles Edward Boles, his picture appeared in all the papers—yet hundreds of miners and old neighbors and friends would keep a secret: that the man in the papers was actually Alvy Boles.

In History in Plain Sight: Joaquin Miller, Ambrose Bierce, and the Real Black Bart, author and historian Margaret Guilford-Kardell investigates the true identity of the man known as Black Bart, and she draws from Harry L. Wells’s History of Siskiyou County, California (1881) and other historical documents, newspaper articles, and letters to explore the fascinating connection between the real Black Bart and poet-novelist Joaquin Miller—two of the most colorful but misunderstood figures from California’s gold rush days.

“Call me what you will,” said a defiant Black Bart upon his arrest. Yet while he was called C. E. Boles or Charles Bolton by the authorities, a story of reputation, competing journalism, and family will show how the real Black Bart was none other than Alvy Boles.

Margaret Guilford-Kardell (1920-) has a B.S. in Agricultural Economics from U. C .Berkeley (1942) and an M.S. also in Ag. Econ. from the Univ. of Tenn. (1943). She drove a jeep and a truck as a WWII Volunteer in the U.S. Coast Guard Port Security Force, while back in Oakland CA, before more research assistant work at U.C. Davis and abroad. As a teenager she lived in Oakland, CA and walked to Joaquin Miller park, did high school in Merced, CA traveled worldwide, living in seven different countries. She retired first to the McCloud River area in CA and finally moved to Blaine, WA. Some publications by Margaret Guilford-Kardell include; The Occasional Papers of Redding California, Autobiography on the Life, Times, and Exploits of Cininnatus Hiner Miller, The Joaquin Miller Newsletters, many articles for the Californian, and various articles on Wintu Indians. Google Margaret Kardell or Margaret Guilford-Kardell for more publications and articles.