A Chef in New York 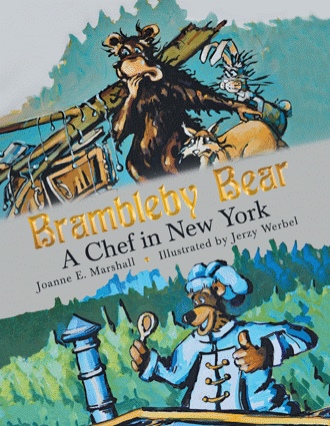 Once in the station, its size was a shock;
he walked for a while, then he found the big clock.
His nails click-click-clicked as he walked on the floor.
He had never felt flooring like this floor before!
The Tennessee marble so shiny, so nice,
felt like Moose Lake when it turned into ice.
He gazed at the ceiling and saw it was spread
with painted gold stars that gleamed high overhead.
Brambleby Bear was in Vanderbilt Hall;
chandeliers’ light shone on every stone wall.
Two very large staircases curved up so high,
that Brambleby thought they led up to the sky.
He selected the left-hand-side staircase to climb
and got to the top, but that took a long time.
He thought, To go down, I think I will slide!
And in seconds came down on a banister ride.
And then with a leap and a rush and a pounce,
he was outside the station with one final bounce.

He was on Forty-Second, a street so renowned!
Spectacular buildings right here could be found.
One glittering building this bear had passed by
had a stainless-steel, needle-point spire in the sky.
Thousands of people rushed by with a whirr,
and ahead, streams of people merged into a blur.
Brambleby Bear really picked up his pace,
from a walk to a run to what looked like a race.

But when he approached a corner ahead,
he had to stop, as the light had turned red!
But he waved as he stood there—just what had he seen?
The twins had gone by in a long limousine!
The Bonds’ family chauffeur—his first name was Herb—
pulled the long silver vehicle up to the curb.
Mrs. Bonds called out to Brambleby Bear,
“We go by the Waldorf; could we drop you off there?”
Brambleby jumped in the car with great glee
and again found his traveling expenses were free!

Goose pimples popped up on Brambleby’s skin,
as the Waldorf was breathtaking when he stepped in.
The lobby gleamed with a rich copper glow—
like the start of a sunrise— that, he would well know!
A beautiful crystal-and-bronze chandelier
sent lights tumbling down over everything near.
Lights just like stars—there were thousands or more—
cascaded down walls and then danced on the floor.
The elegant carpet that Brambleby saw
felt as soft as clouds look, when he stepped with each paw.


The Reception Desk greeting made it quite clear
that Brambleby Bear could ask for help here.
The desk clerk was smiling, and she did her best
to deal well with Brambleby Bear’s room request:
“I’d like a room with a nice woodsy view—
perhaps by the park—just a small room would do.”

Nneka, the desk clerk, looked very dismayed
when telling him, “No reservation was made.”
She went on to explain, “My dear Mr. Bear,
you won’t find a room in New York anywhere!

Brambleby Bear is a North Woods bear, famous for his sweet culinary creations.  Every day, he wakes up early and goes out to his grandmother’s woodstove and cooks the most delicious treats for his woodland friends. Pancakes, maple-nut fudge, and blackberry cake with whipped cream are some of the sweet gooey treats enjoyed by the animals and birds of the forest. But suddenly, a disaster strikes.

In the night, a violent thunderstorm rumbles through the forest. In the morning, Brambleby Bear comes outside to fire up his woodstove, only to discover it was destroyed in the storm.  Whatever will he do now?

In order to solve his woodstove problem, Brambleby Bear travels to New York City and goes to the magnificent Waldorf Astoria Hotel.  What can Brambleby Bear possibly do in New York that might help him to care for his forest friends?

Travel by train with Brambleby Bear to New York, meet his new friends, experience the sites and energy of New York city, and find out if Brambleby will be able to cook again in his forest home for his beloved friends.

Joanne Marshall, a retired teacher, taught English-related studies such as literature, drama, and written communications during her thirty-year career.  She has two grandchildren, Reese and Rowan, who live in Toronto. She lives on Lake Huron with her husband, Bill, and her labradoodle, Quigley.

Jerzy Werbel began painting at the University of Education and Art in Poland. He began painting Canadian landscapes and has been exhibiting his works for twenty-five years. Inspired by his young grandson, Jerzy finds unique elements in stories and translates them into colorful, captivating illustrations.