Only by the Grace of God

by Pamela J. Brink, With Robert A. Brink & With John W. Brink 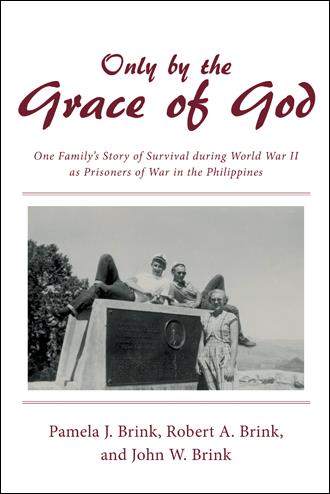 Bang, clang, bang! Three shots through a galvanized iron roof. March of ’42. Great way to wake a 13-year-old from an afternoon siesta. We looked out a window of our cabin in the mountains to see a company of Japanese approaching. We had watched their landing on the beach of southern Cebu two weeks earlier.

Braat, braat, braat! 6:55 AM Feb 23, 1945. We watched from a ditch as the 11th airborne and Phillipino guerillas stormed our prison camp. Some of us had watched them parachute out of their C-47s 5 minutes earlier. That was the morning we were to be machine gunned at 7 AM roll call.

Three siblings from the Philippines wrote down what they remembered about being imprisoned by the Japanese during World War II.

Pamela J. Brink, Robert A. Brink, and John W. Brink all survived the ordeal, but only one of them—Pamela—is still alive today. She shares their experiences in this memoir that recounts the horrors of war as seen through the eyes of children.

At age thirteen, John W. was the oldest when they were captured, and his account is likely the most accurate of all three.

Robert and Pamela’s versions are different as they saw everything through younger, more fearful eyes. All three, however, remember being overjoyed when they were rescued from the Los Baños prison camp.

When they were freed, everyone wanted to hear about atrocities, but their slow starvation could not compete with the horrors that Jews suffered in Nazi Germany. Most ignored their tales, and over time, they stopped telling them.

Three adults look back at their childhood experiences as prisoners of war, how they survived, and how they continued on in Only by the Grace of God.

Pamela J. Brink, Robert A. Brink, and John W. Brink grew up on the island of Cebu in the Philippines. They were imprisoned by the Japanese in various internment camps for three years during World War II. They were rescued Feb. 23, 1945, by the 11th Airborne and brought to the United States.