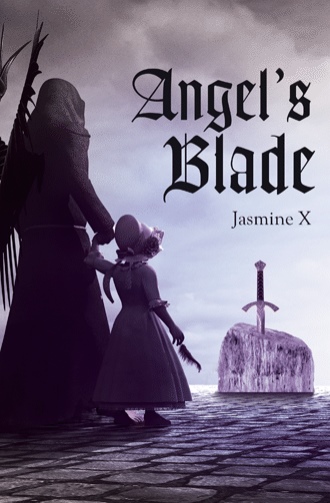 An hour later the hunters had returned to walking the streets. A silence had fallen between them. Loki pulled up short, grabbing Kai’s shoulder stopping her in her tracks. “What?” she asked.
He nodded down the block and spoke quietly. “Do you see that shadow peeking out of the alley?”
Kai’s eyes focused and saw what he spoke of, “Yes.”
“Seems a little odd doesn’t it? And almost as if it’s watching us?”
“We may be too late in surprising it,” Kai commented as she looked up at her partner.
“Possibly,” he shrugged as he looked up to the building next to him. He turned abruptly and jumped into the air, Kai quickly following. They got to the rooftops and sprinted across them towards the alley. The cloaked figure had inched out of the alley, having lost sight of them.
Kai and Loki jumped down on either side of the figure with Kai landing in front of it. It looked up, an eye connecting with Kai before the figure rose what looked like a walking stick and swung it at Kai who blocked it with her arm. The hunter stumbled back giving the figure the space it needed to escape.
It began to sprint down the street but Loki and Kai were quick to follow. “You alright?” Loki called as he followed close behind Kai.
“Fine,” Kai gritted her teeth and sped up.
The figure looked back and cursed at how close Kai had become. “Shit,” the figure exhaled, giving Kai the only information she had on the figure: it was a woman.
Kai took a long stride and vaulted herself in the air towards the figure. Loki watched as Kai flew through the air and caught the figure in her grasp, pushing it into an alley ahead. Loki slowed as he neared and pulled his blade as Kai and the figure got to their feet.
The figure swung the stick at Kai but the hunter grabbed it and twisted it from the figures grasp. “Surrender,” Loki warned the shadow.
But the woman only laughed as Kai watched her hold a hand out to Loki who went flying into the wall. He lye in a heap with his blade beside him as Kai twitched to go to him.
“Don’t worry, he’s fine.” The woman said in amusement.
Kai raised the stick and swung the large end into the woman’s head, knocking her to the ground, her hood falling off in the process. Kai thought she saw her face shimmer but couldn’t be sure in the absolute darkness. She had hair as dark as the deepest depths of hell. Her eyes were glowing like fire.
The hunter leaned over the crouching figure who looked up at her in what appeared to be pride. She mumbled, “And she isn’t even at her most powerful.”
“What are you talking about?” Kai looked down at her with confusion.
“You’ll find out soon enough. I mean you no harm Kai; I come only as a shadow of protection.”
Kai frowned, “How do you know me?”
The woman smiled, “I know a lot. I also know that once you think it’s over, it’s not really. Don’t forget that. Don’t get too comfortable with the peace. It won’t end this summer.”
Kai was stunned, “What?”
The figure smiled up at the hunter as her form began to shimmer, “Don’t forget what I said.” But before Kai could say more the figure and her stick were gone from Kai’s grasp.
Kai heard a shuffle and turned to see Loki grabbing his blade and rising to his feet. “Where did she go?”
“She disappeared,” Kai frowned at him, “Into thin air.”
Loki sighed as he walked to Kai assessing that she was okay, “What happened? Did she say anything?”
Kai nodded, “Yeah.”

After Angels sacrifice their lives to save a dying earth, the need for Hunters becomes more evident than ever. When Kai Santerre receives the Hunter’s mark on her sixteenth birthday, she is eager and ready. But now that the Demons, Werewolves, and Vampires have come out of hiding, her mother is less than enthusiastic about Kai’s new role.

After she intensively trains for over two years, Kai earns a reputation as one of the best Hunters in the world who is well known among both humans and creatures of the night for her abilities. But when she receives orders to report to the Cardinal League in Chicago, Kai is confronted with a familiar face and a mystery. Helped by an Asteri Blade, her cocky partner, and the support of her fellow Hunters, it is now up to Kai to connect all the pieces of an ancient puzzle to ensure a future she was once certain she could never have.

Angel’s Blade shares the compelling tale of a young hunter’s journey as she attempts to solve a mystery amid a world rampant with dark creatures determined to stop her.

Jasmine X grew up in Madison, Wisconsin, with a wild imagination that encouraged a love of fantasy worlds and the creatures that inhabit them. She operates a forklift by day and surrenders to her mind at night. Angel’s Blade is her first book.