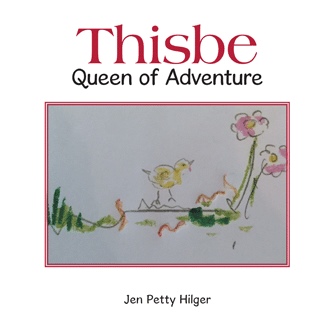 Even as an egg Thisbe dreams of adventure... after hatching she starts off to explore the world around her.

Even as a tiny egg, Thisbe dreamt of adventure. Before she hatched, her egg practically vibrated with enthusiasm. Then, one day, the little chick broke free to a bright new world. Of course, she wants to go off adventuring right away, but she’s much too small for that—plus, her mama hen won’t let her leave the nest, not yet.

Thisbe peaks over the edge of her perch, wondering about the world beyond, until one day, she starts to grow. She grows more and more until she even begins to flap her wings and gets a whole three inches off the ground. When the time is right, her mother decides Thisbe can finally leave the henhouse, but only if she promises to stay by her mama chick’s side.

Together, they travel out into the garden and the yard. In all its grandeur, the world is everything Thisbe hoped it would be. She meets other birds. She sees worms, spiders, and butterflies. The land around her is beautiful and filled with excitement. Now a grown chick, Thisbe’s wondrous adventure has begun … and so can yours!

Jen Petty Hilger has been a book reviewer and early education teacher. She’s an artist with a passion for illustration. She grew up in Manhattan and London, traveled extensively, and now lives on the ocean in Old Lyme, Connecticut. She and her husband have six children, six chickens, two cats, and a rescue dog the size of a barn.