The Adventures of Otis Pendleton

The Hunt for Autumn 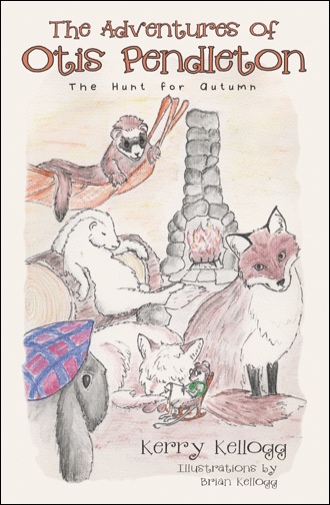 As Otis headed back indoors, he noticed the ceiling was starting to leak.

"It looks like Mother Nature is encouraging us to go right away!" Otis said to himself while thumping his hind leg as a warning to everyone.

The others skittered and scampered to their burrows to grab their knapsacks. Scout continued to give orders. "We must stick together. Everyone meet back here as fast as you can!"

By this time, the kits were awake. Grandpaw Otis leaned over the bed and tried his hardest to appear calm. Before he could think of what to say, Winter asked a question. "What's the matter, Grandpaw?"

Otis had an idea, but he needed to be convincing. "We need to go on a little adventure of our own, little ones," he said with confidence.

Winter put a paw around Barnaby as he huddled close to her. Autumn started bouncing up and down with excitement. Otis got serious now. "We have to listen and stay close. Head out to the garden, and I'll be right behind you." As Otis took the map of the forest off the wall, he looked around the rabbit hole one last time.

Winter and Barnaby rapidly hopped their way to the garden. Autumn stubbornly sat back on the bed without moving. Otis looked at her expectantly, but Autumn still did nothing.

"Autumn, you need to hurry along," said Otis.

Otis tried to be patient, but his whiskers began to move from side to side very quickly, and that meant only one thing: he was about to lose his temper.

"If you don't start hopping by the count of three, you will be in big trouble, missy," said Otis.

With a pinched face and brows furrowed, Autumn folded her arms and considered her options. She was jolted out of her thoughts when Otis started counting.

"One ... two ... " And before he could say three, Autumn scampered toward the door. It's a good thing too, because Otis didn't have a plan about what he was going to do if she didn't cooperate.

Nobody needed to ask what took so long. They were all familiar with Autumn's antics. Despite their annoyance, the friends welcomed Autumn. Her mood did not improve, however. It was as dark as the storm clouds that blanketed the sky above the little party.

Otis Pendleton is a kindly, old grandfather rabbit who enjoys the peace and quiet of his cozy burrow. He’s looking forward to a relaxing evening reading with his grandkits, but a summer storm changes his plan. First, he smells the rain. Next, his dog friends report back that the river is rising. It looks like it is time for Otis and all his animal buddies to move to higher ground!

The group—a mismatch of best pals from cats and a dormouse to dogs and a ferret—begin their journey to the big rock, where they’ll be safe. But the trip is anything but easy. Not only are they forced to wander through the storm, but they also must dodge falling tree limbs and cross dangerous human streets. In all the fuss, one of Otis’s grandkits wanders off.

Even though aging Otis is injured, he sneaks away to save his beloved lost rabbit and embarks on a treacherous journey. What damage has the storm brought to their little forest, and how will he ever find his precious missing grandkit? Luckily, with the help of his friends, Otis learns that even an old, country rabbit can persevere with a little grit and determination.

Kerry Ann Kellogg is a first-grade teacher with twenty years of teaching experience. She earned her teaching degree at Keene State College where she minored in English. Her love for her pets and backyard critters inspired this book. She and her husband have two children. They all live in New Hampshire with Otis, Barnaby, and Patches.