Layla in the Sky with Diamonds 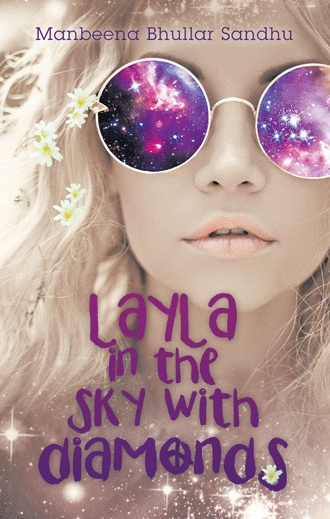 Layla woke up to the crowing of the roosters in the morning. There was a dance in her step as she bounced out of her bed and swung open the window that faced the sea. Fresh ocean breeze swept across her face. The large orange ball of fire slowly started rising over the ocean, enveloping everything in its orangeness. The sea was ablaze in its pink and orange hues. Crows cawed lazily perched on the branches of tall trees.

Hearing a knock on the door Layla slid open its wooden bolt. “Hello, girlies. The tea is ready,” André said with a smile. Layla woke up Belinda and the three of them sat around a wooden table, sipping masala chai prepared by André’s ayah, named Rosie. She was a cook, a cleaner, and a caretaker of the house, all in one.

“Thank you for the delicious chai, Rosie,” said Belinda.

Layla and Belinda talked about how well they’d slept through the night and how much they were already falling in love with the place. “I don’t want to spend the rest of my life anywhere in this world but here, in Goa. Goa is my home, the heaven on earth I had been searching for all this time,” Belinda passionately stated. “Yes! Undoubtedly so. I didn’t even know that this little world actually existed. We searched everywhere—New York, San Francisco, and all over Europe. Goa is what I have been looking for all my life. My only regret is that I didn’t find this place earlier,” mumbled Layla,scrunching her face.

“There is timing for everything in life, Layla. You couldn’t have come here before the time was ripe for you to be in Goa. You had to go through all your experiences in New York, San Francisco, and Europe in order to be able to appreciate what Goa has to offer. Maybe you wouldn’t have liked Goa had you come here five years back,” explained André patiently, his words dripping with wisdom.

“Yes, you are so right! Where do you get all your wisdom from?” asked Layla, leaning towards him. Her eyes suddenly fell upon an old, rustic bookrack placed in a corner. “Ah! From these books!” She walked towards the rack full of books on the Vedas, Upanishads, Vedic Astrology, and Kundalini, quickly leafing through one of them.

“I meditate, and that’s how I get my wisdom.” André smiled before he continued. “I left my home and family in Paris five years ago. For three years, I wandered in the Himalayan forests, seeking wisdom from yogi to yogi. I gained a lot and learnt a lot, but something was still missing. One fine day, I finally realized that I did not want to live in isolation. I did not want to renounce completely and become an ascetic.” André paused for a moment and then added, “Then I met a yogi from Goa who turned my world around. I followed him to Goa. As soon as I put my foot on this land, I knew this was it! Now I live in this world but do not belong to it. I do not form attachments or have expectations of people or situations. I pray to Lord Shiva, and I am simply dancing in his creation. That’s all I do.” André’s word were slow and precise in his tuneful French accent.

“Holy cow! You sound so out of this world, André. I feel completely enraptured,” shouted Belinda.

“Boy, oh boy! I’ve got a lot to learn from you André,” agreed Layla.

“Aha! The toilet.” André laughed. “Rosie! Could you please show the ladies the toilet?”

Rosie walked in with a metal container brimming with water and motioned for the girls to follow her. She walked them out of the house and onto a path created by trampling feet. They crossed a well around which a mother bathed her crying, soapy child. A dog barked at Rosie, but she warded it off with a stick. After another two minutes, they reached their destination: a raised platform with holes in it. Rosie explained to the girls in her broken English, and by pantomiming, that they needed to squat over the holes to do their business. There were only three walls around the toilets, which left the front open.

Belinda went in first; Layla stood in front of her to block her from view. As soon as Belinda was done, she was startled by a grunting noise coming from underneath the platform. André later explained to the girls the unique sanitation system of Anjuna. The pigs had their own passageway to reach underneath the platform. Whatever went through the holes was eaten by the pigs.

Soon they were ready to leave the house. André handed a pink parasol to one and a purple parasol to the other. As they walked, twirling their parasols gently while resting them on their shoulders, they noticed tiny Goan houses with thatched roofs and stone walls scattered on little hillocks by the beach. A European woman lounged in a hammock in the front yard of her house under the shade of a tree. She lay bare-chested with closed eyes and fingers locked behind her head, revealing her unshaved armpits. An open book, turned upside down, rested on her navel. “She is Italian Sophia, our neighbour,” commented André.

A man with shoulder-length brown hair and freckled cheeks sat under a tree, playing melodiously on his guitar. “He is Spanish Juan,” noted André, waving at the man.

Layla and Belinda couldn’t spot one local Goan lounging around as they walked to the beach. It seemed like the white hippies had invaded this beach, ushering all the locals out of the area. The only local Goans they could spot were only the ones who owned chai shops or restaurants, and who worked in the houses of hippies.

Layla lifted the hem of her maxi to step over boulders that led to the sea shore. They strolled along the shore to reach the southern end of the beach where everyone gathered. As they approached closer, Layla and Belinda were awed to see around 150 people with tanned and naked bodies lying in the sun, playing, reading, dancing, and singing. They heard a group of guys cheering as they played badminton in the sun. “Whoa!” yelled Layla, sidestepping as a shuttle flew past her face. “Boy, oh boy! That was close.” She exchanged glances with Belinda. They couldn’t hold in their excitement in regards to what they were seeing.

“I love it!” yelled Belinda as she took off her dress and ran into the sea, followed by Layla. André joined the two.

Belinda and André were still playing in the ocean waves when Layla swam out. She spread her dress on the sand and lay on it with closed eyes to soak some sun, and she gradually nodded off. Belinda’s giggles woke her up a little bit later. André and Belinda were rolling in the sand as he tickled her. “Stop!” she managed to say between guffaws. Tired of swimming and playing, André now lazily lay on the sand with Belinda lying beside him, her head resting on his arm. They dozed off for a few minutes before a female voice in a tuneful Italian accent woke them up.

It has been twenty-four hours since Layla last had cocaine. The blonde American now on a flight to New Delhi with her one white child and one brown child is struggling to keep it together. As she departs the airplane, all she can focus on is how quickly she can hook up with her friend and drug baron Leonardo so he can provide her with her next fix.

Layla, a flower child of the 1960s, has travelled around the world in search of a utopian land. Her life story begins with her wild rock and roll years in New York and continues on to tell of her hippie days in San Francisco and Goa where hippies of the world converged to partake in a bohemian lifestyle. Here, her heady ways were combined with a few unfortunate incidents and wrong choices, ultimately leading her to her spiritual awakening, but not before paying a dear price.

This compelling story line weaves 1960s and 70s style hedonism, Indian culture, drugs, family, devastation, passion, spirituality, and endearing characters into an engaging tale. The author takes you on a journey of vivid impressions, bringing to life the spirit of a lost era.

Manbeena Bhullar Sandhu holds a degree in substance abuse and addictions, and a master’s degree in English literature. She is an addictions counselor who is actively serving humanity by helping those in need. Manbeena currently lives and works in Toronto. This is her first book.