The Camino Made Easy: Reflections of a Parador Pilgrim

Three Walking Tours on the Way of St. James through Spain and Portugal to Santiago de Compostela and Finisterre 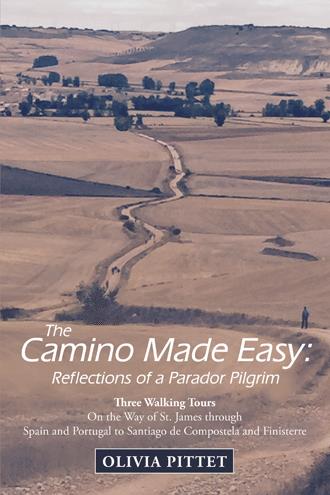 “On this second visit, we didn’t bus into O Cebreiro but did a 10-kilometer uphill walk, our first of this trip, starting in Vega de Valcarce and passing through Herrerías, La Faba, and Laguna de Castilla—technically the last town in Castile, but already heavily Galician in atmosphere. We started out on a country lane, but soon switched to a rutted cart track, passing fields and farmyards and barnyards, with the sight of bracken on the distant hills, heather and gorse and fall crocus beside us on the path, and chestnut, rowan, quince, and pear trees periodically lining the route. The Way often ascended steeply, though never insurmountably so: luckily, we didn’t have to do the entire 30-kilomter climb starting in Villafranca, like through-pilgrims, or have to deal with really bad weather on this high pass, which the Codex called “Mons Februari,” But still, never tired pilgrim’s limbs affected slumber more than by the time we clambered up into the village of O Cebreiro in the failing light and checked into our hotel.

“Before dinner we had the opportunity to attend the evening service at the parish church, which we had visited just for a short while our first time, when I remember admiring all the open bibles on display in at least half a dozen languages. And on our second visit, the liturgy was reproduced on a screen in several languages—English, Spanish, French, and German—unlike the monolingual treatment of the pilgrim mass in Roncesvalles. Here too in O Cebreiro, unusually in our experience, after the service the priest greeted everyone personally and shook their hands.

“Some pilgrims say they find O Cebreiro is a tad too Euro-Disney, and certainly on the bright sunny morning of our first visit, with all the tourist buses including ours idling in the parking lot and piped bagpipe music emanating from quaint little gift shops selling ceramics and CD’s, they may have a case. But not, I think, if one is lucky enough to encounter, as we now did, the swirling mists, felt rather than seen at night, but when we prepared to leave on foot the following morning, clearly visible moving dramatically hither and thither in the rain-swept valleys below. This added a special atmosphere to the setting, conjuring up The Mists of Avalon and the Grail legends.

“O Cebreiro, like Glastonbury in the southwest of England, was long associated with the legendary presence of Joseph of Arimathea and his role as protector of the Holy Grail. It was said that the Holy Grail came into the hands of St. James, who brought it here with the Gospel after accompanying Mary Magdalene to Marseilles. This story may have brought the earliest pilgrims to Galicia, although O Cebreiro is also closely tied to the Way of St. James. Indeed, its very special little church claims witness to an extraordinary fourteenth-century Eucharistic miracle. This is said to have occurred at a service attended by a lone medieval peasant, who, to the amazement of his incredulous parish priest, had struggled up from his village in a blinding snowstorm intent on hearing Mass, but arrived late, at the moment of consecration. What is one to make of this miraculous Mass, in which the traditional communion elements of bread and wine were allegedly transformed into Christ’s real flesh and blood, possibly carrying the doctrine of transubstantiation a tad too far? Perhaps what one could say is that the living faith of the unlettered laity will always, in all weathers and all religious climes, eventually top the rote-bound practices of some of their priests.

“But O Cebreiro’s real miracle, in my view, occurred relatively recently, in the last fifty years, with the radical transformation of the Camino, which had fallen into desuetude from centuries of neglect, into its present well-marked and well-walked route. For this was partly due to the dedication of one of Galicia’s native sons, a scholar-priest named Elías Valiña Sampedro, who was also the author of two seminal studies on the St. James pilgrimage and later wrote of one of the first modern Camino pilgrim guides. Valiña died in 1990; but his monument stands close to this church, which is his burial place; and his family still runs the hotel and restaurant where we stayed. Believing in the importance of reviving the Camino for the modern pilgrim, and following in the medieval footsteps of such Camino-building, miracle-working saints as Santo Domingo de la Calzada and his disciple San Juan de Ortega, Valiña remapped and reconstructed the by then largely defunct Camino, conforming it as much as possible to its original route by consulting the Codex Calixtinus, that twelfth-century, multi-storied pilgrim guide. Elias was assisted by the archbishops of Lugo and of Santiago, and by the president of the Xunta de Galicia, resulting in the conceptualization of the 100-kilometer walking requirement and the albergue network, and of the revival of the credencial del peregrine, as a means of promoting Camino tourism. These efforts have now been amply rewarded, since the popularity of the Way of St. James continues to grow: in 2017, about 200,000 people from all over the world walked the Camino Francés, with about a hundred setting off from St. Jean Pied-de-Port almost every single day.

“This trail-blazing, visionary priest was also the one initially responsible for the Camino’s now ubiquitous and unmistakable, not-to-be-missed yellow arrows—one shouldn’t let oneself be talked into thinking that the color yellow has some sort of symbolic other-worldly significance: a nearby construction project was offering a lot of left-over yellow paint! Indeed, the Camino is now so efficiently marked with yellow arrows and the EU’s distinctive scallop shells that, except in adverse weather, or in instances of extreme loss of concentration, it is virtually impossible to go astray—and if one does, the locals will generally provide an assist. And all of this, thanks largely to Father Valiña, now makes the Camino an ideal pilgrimage walk for all, young and old, experienced and inexperienced alike.”

(From Chapter 8: Twice-Told Tales of Monks, Priests, and Celts: Two Visits to O Cebreiro and Samos)

The Camino Made Easy: Reflections of a Parador Pilgrim relates three fascinating, culturally rich journeys on the Way of St. James, or the Camino, through Spain and Portugal to Santiago de Compostela. This personal, practical, and informational story testifies to the advantages of doing the Camino on a walking tour, while offering fresh perspectives on this long-distance medieval pilgrimage route for pilgrims and tourists alike.

Olivia Pittet describes stunningly varied landscapes, including the Basque country, the Rioja wine region, and Celtic Galicia, as well as the World Heritage cities of Burgos, León, and Santiago, while gradually unfolding the Camino’s extraordinary cultural legacy and religious history, its present-day relevance, and its enduring appeal. She recalls what it was like to walk over one hundred miles on each journey, interweaving her Chaucer-style interactions with her fellow pilgrims, her love of landscape, and her special interest as a former medievalist in the Camino’s literature and legends. Olivia also interjects her own tale, tracing her unexpected spiritual journey from its initial stumbling blocks to a developing sense of pilgrimage the closer she came to Santiago, where there are as many answers waiting to be found as there are ways of walking the Camino.

Olivia Pittet was born in England and moved to America in 1963. She received her BA from London University and her master’s degree in English and comparative literature from Columbia University. Now a freelance editor, she previously worked for many years in book publishing. Olivia is also a dedicated walker who has taken walking tours throughout Europe and North America for over twenty years, on one of which she met her present husband. This is her first book.