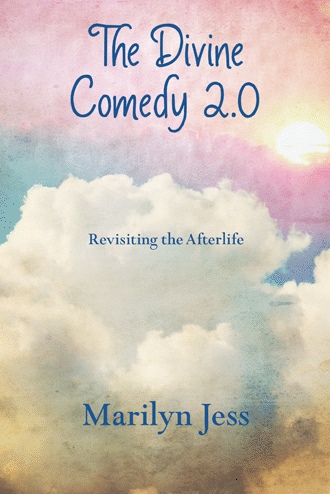 Canto 1
Introduction, meeting Dante
Half-way through a normal human lifespan
I found myself lost within a desert
which looked like it had once been a forest.

There were stumps of mighty ancient trees which,
as far as my eye could see, had been logged
by many generations of woodsmen.

Between the tree stumps, gasping to survive
with desperate roots reaching for moisture,
were stunted weeds and mutated saplings.

How I journeyed there, I cannot recall.
perhaps a blackout following a binge.
At any rate I could not see a path.

But in the distance a moun-tain arose,
so huge it hoarded all the sunlight
and left my desolate plain dimly lit.

With little daylight left I hiked toward
that mount, which seemed the only logical
place where I could hope for timely rescue.

The rocky ground rose slightly as I walked,
first with boulders growing ever larger,
then with treacherous rocky outcroppings.

I longed to reach the moun-taintop to rest
but weariness prevented my ascent.
I looked behind me to check my progress

when, shocked, I saw the path I had traversed
was now a trench surrounded by barbed wire
and I was in the midst of World War I!

So, terrified, I leaped back to my feet
and nearly backed into the tusks of a
mastodon (which I thought had been extinct).

Reeling around, a flock of Passenger
Pigeons battered my flailing arms and head
and pushed me into yet more dead species.

I ran back to the trench, de-spite my fear
of what new surreal horror would await,
when suddenly a cloaked human appeared.

I cried out, “Help me! Get me out of here!
Where am I? Who are you? Why are we here?”
The man stood motionless at first, then said,

“My name was Dante Alighi-eri.
Just as the poet Virgil was my guide
so now my turn has come to mentor you.”

Then, recalling epic poetry,
I stood and stared rudely - my mouth agape.
My denial vanished. I slurred, “Uh – oh.”

Yup,” he answered. “We’re going on a trip.
Your mother, who still goes to church, has prayed
with tear-stained eyes for your immortal soul.”

A string of epithets escaped my tongue
and, horrified, I covered up my mouth.
“There will be plenty time for that,” he smirked.

A sickness overtook my mortal gut
as I looked all around, then studied him
who, hopefully, was simply a bad dream.

“No such luck,” he said, guessing my sad thoughts.
“For what it’s worth,” he added, “I too felt
that self-same dread when I first met Virgil.”

I answered Dante with a shaking voice,
“So then you’ll guide me through the rings of Hell,
then Purgatory up to Para-dise?”

“Not quite,” he answered. “Things have changed a bit.
With overpopulation Hell is full.
The ancient Hell is covered over now

“and many new Hells had to be produced.
The first prototype is here around us.
The trenches from that War were not enough

“so all those holes left by atomic tests
have been an interim re-placement.
Several radioactive craters

“left by Russians and Ameri-cans
will probably contain the evil dead.”
Then as an afterthought he said, “For now.”

He took my arm and said, “Here, take my cloak.
It’s rated to protect your mortal flesh
from alpha, beta, gamma and x-rays.”

Then, urging me along he said, “Let’s go”
“No, wait!” I cried. “Those animals ahead
will tear me limb from limb or eat me whole!”

Then Dante shook his head and answered me,
“They’re all extinct, remem-ber? Humankind
destroyed them all therefore they don’t exist.”

So fearfully I followed Dan-te’s lead.
We wandered past those hollow-eyed skulls which
had witnessed new atrocities of war.

We hiked again back to the barren plain
and saw, from stumps, how massive trees once were.
Those fearsome beasts were fading now from view

and I felt guilty that they were extinct.
Then, struggling to recall my Classic Lit
I turned to ask my Mentor and my Guide,

“If I recall correctly our first place
will be a gate to Hell that has a sign,
‘Abandon all hope Ye who enter here’.”

“Oh, really,” he replied, rolling his eyes.
“I guess if you unsophisti-cated
types need cheap clichés then it will be so.”

“But actually,” the sage con-tinued,
“don’t you think that back on Earth there are those
already enduring a hopeless hell

“while small percentages of people live
as if there were no need to share God’s Grace?
There is no need to specify a place

“uniquely meant for misery and pain.”
“No disrespect intended,” I replied,
“But haven’t things improved since you were here?”

“Far from starvation,” I con-tinued on,
“It seems like everyone is now obese.
And people live much longer than before.

He answered, “As we go along our way
you’ll see what I’ve observed for centuries
of progress, best intentions and ideas.

We kept along our way as he explained,
“So the Hells had to be reor-ganized -
not just expanded to hold more sinners.”

“How so?” I asked, and struggled to keep up.
He answered, “There will be time for questions
later on. For now time is run-ning short.

Dante Alighieri’s ‘Divine Comedy’ really needed to be updated. After all, it was written – what – 700, 800 years ago? Hell needed to be reorganized, not only because of overcrowding but also because the 20th and 21st centuries have seen creative new sins that Dante could never have imagined. Purgatory now is more like a treatment center, and those entering have admitted that they are powerless over Sin and their souls have become unmanageable. There they meet their guardian angel who serves the role not only of a counselor, but also as a tutor who can bring them up to speed on the latest technologies. Paradise is more like a graduate curriculum plus boot camp where the adventuring soul can train to become one of the Heavenly Host.

This updated version of the ‘Comedy’ attempts to answer the questions of why evil exists, who is God, what is the purpose of life, and all kinds of stuff like that. Enjoy.