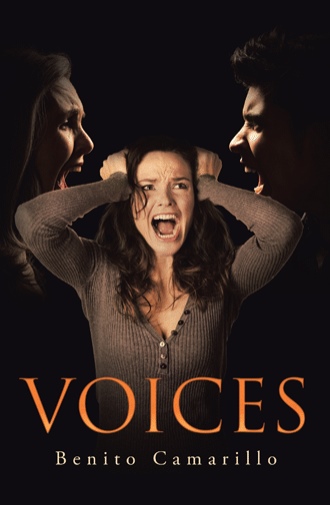 VOICES
When the young woman entered the store, holding hands with her father, as usual, men turned to look. At 30, even then she appeared to be years younger. Her long dark hair was a perfect backdrop for the face of latina beauty that was hers. Dark skin, high cheek bones, glossy white teeth – and the most gorgeous brown eyes that would captivate any man’s heart and soul if he dared look into them; her waist was narrow and her figure was almost perfect hour-glass shape, except she had rather large, firm breasts. Men always stared at her. The men that just stared at her breasts disgusted her. The others, young and old that smiled at her with brief eye contact, pleased her. It made her feel good.
Within a few seconds of that happy entrance, with her hand in the strong hand of the father she adored and admired, her world would suddenly change. It was at that moment that the voices began. Not happy voices, but mean, nasty, degrading voices. At first she was startled, and she looked around to see who was saying these horrible things to her.
“You slut!” “You whore!” “Why do you fuck around with that FBI man?”
She glanced quickly at her father – he was looking for the aisle he had planned to visit and obviously had not heard those voices. They were so strong, so clear –and she did hear them. She started to panic inside. How? Why? Who are these people? Why are they saying these nasty things to her and about her? At age thirty, Linda was still a virgin. She had not even kissed a man on the lips until she was twenty-seven! Her mind was racing for answers. At one point in her frantic search, she considered the voices may be from extra-terrestrials who were telepathically communicating with her by mistake. She looked around at people nearby to see if anyone appeared to be staring or concentrating on her. One or two were, but they were young men who stopped smiling and quickly turned away when they met her focused stare. She tried to ignore the voices, but they followed her and her father throughout the store, until as suddenly as they started, they stopped. She never mentioned them to her father – at least not then.
Over the next year, the voices frequently returned until they became daily events, terrifying her each time they began. They were always mean and nasty, using language she would never use. They accused her of doing all kinds of deviant sexual things with men of all types – even at one point accusing her of being an international call girl, charging high prices for her nasty sexual favors, which they described to her in detail. The voices were shocking and what they said was equally shocking to a good Catholic young woman. Linda was still a virgin at that time, and remained one until she married at age thirty-three.
Linda Masters Sol Angel de Maria (“sun angel blessed by the Virgin Mary”) who was already carrying some burdens and trauma from her past, was now given a challenge of a life-time.

Thirty-year-old Linda Masters is shocked to her core when she first begins hearing haunting voices in her head. As a beautiful, devout Catholic virgin she is used to receiving admiring glances. She begins to panic when the voices accuse her of deviant acts with men. As she attempts to learn the source of the nasty voices, Linda has no idea she has just been given the challenge of a lifetime.

After the voices become progressively worse, Linda visits a psychiatrist who diagnoses her with paranoid schizophrenia and prescribes medicine with unwelcome side effects. Still determined to pursue her dream of becoming a nurse, Linda enlists in the Army where she attempts to lead a normal life until her condition is discovered and she is discharged. After a failed marriage she returns home. Her voices get worse. One day Her concerned father finds disturbing notes penned by her and commits her to a mental health facility. As she undergoes treatment by a remarkable, caring psychiatrist, Linda learns to control the voices. But will she ever be able to find a soul mate who will love her despite her past trauma and the challenges that lie ahead?

In this poignant tale based on a true story, a young woman diagnosed with paranoid schizophrenia must find a way to survive and love while the voices in her head battle for control.

Benito Camarillo was born on an island off the west coast of Scotland, and eventually emigrated to Texas with his family. After completing active duty during the Vietnam War era, Benito traveled for insurance companies throughout the United States and Canada. He now calls Arizona home. Voices is his debut novel.