One in the Same

Journey from Mortal To Sorcerer

by Douglas A. Breeden 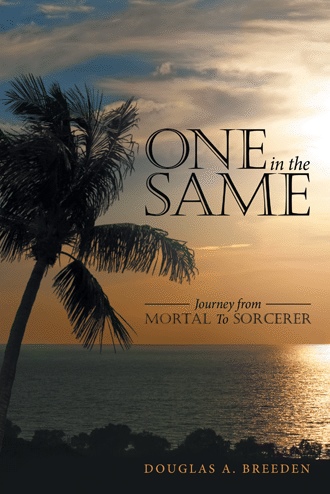 In the background a giant cavern like hole opened up and these old white vans were driving in and out of it. A red-purple glow emitted from the bottom of the chasm and it looked forbidding and evil in its appearance. Rising from the ground was a brilliant golden stairway with limos and golden carriages moving in both directions on it. I motioned the stunned Michael to follow me and we walked towards the pit. That is when I ran into an old friend, I stopped our progress and began speaking with her, since I never just passed her by.
She looked in her twenties, with straight long black hair that extended down towards her pale white shoulders. Her skin was all pale white, like snow in the darkness, and her lips, colored a black-red, seemed to extend from one ear to the other. Her eyes were dark, but somehow appealing, and she was dressed in a short and tight green dress, with black boots that came just below her knees. She was sexy, yet in an approachable way, mysterious, but not scary, distant, but not too far that one could not speak with her.
"Mary," I said, in a rather flirty way, she was hard to resist, "What's up tonight, got many to speak with?"
Michael noticed the black hue emitting from her, and as she smiled her fang like eyeteeth were visible. She spoke with a British accent and flirted back with me, I had fallen for this vampire, but not hard, I knew the breed.
“A few, love," she whispered, "some are really bad, I hoped I helped a bit. None ventured out, which is OK, not hungry tonight. Hey, who's your friend?"
I introduced Michael to her, he shook her hand and was a bit surprised that it was not cold like he thought it would be, but rather a cool warmness that confronted him. Her eyes glowed, emitting a mellow blue light that called one to come closer.
I laughed and warned Michael, "Careful, young man, she is rather seductive and promiscuous."
"Guilty on both counts," she purred as she caressed my companion’s shoulders. It made him uncomfortable, but he toughed it out for my sake, or so he thought.
"So, your name is Mary?" busted awkwardly form his lips, he then mentally chastised himself for embarrassing the both of us, his perception, and he went on the inwardly declare that he was the stupidest creature that had ever trod this planet.
I cut him short, a bit tired of his constant demeaning of his self, “Michael, you have to stop that, you are not the stupidest thing ever, much to the contrary, and you are not stupid, just a bit awkward."
Michael saw that again I had read his mind, for years he had put himself down. He had told me that I was the only assistant he ever had, he sometimes referred to me and the others as handlers, who respected him for who he was, despite his low self-esteem. He had told others that I had never spoke down to him or treated him in a condescending way, he said I always addressed him as one human to another, which was the best thing of all.
"So, young apprentice," the woman whispered, "going on a trip, maybe I can get something to come up?"
I laughed at him as it took a couple of minutes for his to realize what she meant. He responded using his most adult voice, 'I l think I am too young for you,"
Mary placed her arm around his shoulder and asked a question that will soon dog my poor young apprentice, “So he’s a virgin right, might be able to fix that too.”
“Yes he is., but no time tonight, got lots to do,” I laughed as he seethed a bit in embarrassment.
She laughed and hugged him, not making fun of him but showing him that she thought he was cool. The only thing she said in parting to him was, "When you're dead, age is a moot point."
I watched her walk away, I could tell that Michael was wondering if there was anything between us, fortunately he concluded that it was none of his business.
'That was Mary Seymour," I instructed him, "daughter of Catherine Parr, widow of Henry VIII and Thomas Seymour, Lord High Admiral of England and the uncle of King Edward VI. A man who processed two fatal flaws in those days, he was ambitious and a fool. She is a Baobhan Sith, a Celtic vampire. She speaks to depressed and lonely people and tries to comfort them, as she knew rejection and sadness in life. She tries, because of her afflictions in life, to help those suffering now, it is a mission of hers, a passion, one she devotes herself to totally. She does this, speaking to and for those suffering, out of love and compassion for those suffering the darkness of the mind. She is a great person, even if she is one of the undead. Later I will introduce you to Alexis, the vampire Lord of this area, actually all of North America, but that is for another time, now let's visit the underworld."

High school senior Michael Siversten has never felt very powerful. He’s a high school senior with a scraggly beard. He has something called Asperger’s, which he researched relentlessly. He knows he says awkward things sometimes, and he needs a helper to get him through school—but he likes people, and people like Michael.

One night, he’s troubled by a dream in which his old assistant and mentor, Alexander Davidson, exclaims Michael will soon be “one and the same.” The vivid dream is a bit of a puzzle, so Michael seeks Alexander out. What he learns is nothing short of shocking. Apparently, Michael is a sorcerer, and life is about to get a lot more complicated.

He must soon start a journey that will take him from the depths of Hell to the heights of Heaven. Michael will be introduced to the supernatural world of Palm Beach—which some call the Carpathians of North America. Follow Michael and his journey through many trials and tribulations as he fights to become the powerful sorcerer he was born to be.

Douglas Breeden is a retired teacher’s assistant who worked with special needs and Asperger’s students. He holds three degrees: a bachelor’s in education and history, an associate’s in funeral service, and a master’s in history. He is the author of a collection of short stories about the residents of Palm Beach and a collection of essays on history. He lives in Palm Beach County.