An Animal Tale for Adults 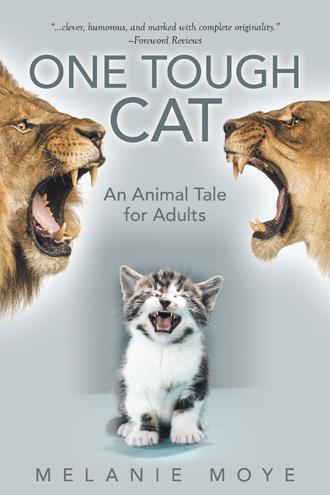 Life is strange, and although I've never been especially religious, I'm convinced that there is a Great Spirit that looks down from above. I don't pretend to understand it, but I often do see a sense of purpose, a "why," if you will. Of course, I didn't see the purpose of the following events until much later. At the time, it was quite the opposite... I was beginning to feel a little stronger, but still not up to par. I was lounging around most of the day and just beginning to feel relaxed in my abode when Eunice decided to take another Fur into our home. Oh joy! E-Yeows and their sense of timing...I wanted to shout to her, "No!" In fact, I voiced my opposition, weak as it may have been, but again, the language problem was insurmountable. She obviously didn't understand me. So, she brought in a young "Tabby," as they say, a male whose name I later learned was "Gus." Well, that's what his given name would translate to. Of course, just like a human, Eunice gave him the name "Twinkle," of all things. He was a burgeoning prize fighter, for Pete's sake, and she gave him a piss-ant name like "Twinkle"! With my special aptitude for language, I understood all the connotations of the cutesy, emasculating handle he'd been given, but I didn't have the heart to tell him. He didn't understand a word the female giant said, so I didn't suppose it mattered, anyway. And of course, if I told him his name, the topic of my name would have inevitably been raised. So, I said nothing, but chuckled to myself each time "Twinkle" was called and Gus picked up his ears inquisitively.

I had just awoken from an afternoon nap, and I heard some commotion in the kitchen. I stretched and got out of bed just in time to see Eunice come in with a Furbearer tucked in her upper paws. She did that thing with her mouth that E-Yeows do when they are happy. "Fluffy, I want you to meet a new friend; this is Twinkle." At first, I stifled a laugh at the name; then, the gravity of the situation sank in. She placed Gus on the ground and watched from above to see how we two would get along. There would have been a time just recently really when I would have thought that this Fur was just passing through, that he'd be on his way in a day or two. But, I'd matured a lot mentally since my accident, so I knew that when a human brought a Furbearer or a wolfer or a crawler into the house, it was the equivalent of saying that the individual was there to stay.

"This place isn't big enough for both of us"! I blurted out.

"Oh yeah," Gus hissed, "Well, I didn't ask to come here!" I kept my eyes riveted on him, remembering that the furless giant in the room didn't understand our tongue.

"Now, you two must learn to get along," Eunice said, at least sensing from our speech that all was not well.

"Looks to me like you ain't in no position to be saying who can and cain't come into this territory," he snarled. Finally, Eunice wiped that silly expression off her face, scooped up Gus, and hurried out of the room. Things were about to get really ugly, and I was glad that at least for the moment, I could get myself together and figure out where to go from there. I knew he'd be back; that was a given. I began to contemplate why he'd said what he said. Then, I saw my image in a pail of drinking water, and I was shocked at how skinny I looked. The accident had taken a toll on me. In my world a Fur lived or died by how large he was. I had to get bigger and stronger; I couldn't let this clown come into my domain and start kicking my ass. I walked over to the chow bowl. There remained a good portion of leftover food. I chewed, all the while having a great sense of foreboding. Insofar as anyone could really know himself, I knew I wasn't the kind of Fur to take crap off anybody, even if it meant being beaten to a bloody pulp. I would have rather died than to have been branded a coward. But, in my present condition, it was doubtful if I could put up a good fight. I sensed that my days were numbered. For the moment, though, I had to play the most powerful card I'd been dealt—my brain.

Leo, a Furbearer, didn’t have a privileged upbringing, but he’s always been cunning and strong. Though this tabby came from humble beginnings, he’s found a plush home with Eunice and her family of E-Yeows, the creatures who walk around on two paws and have fur only on the tops of their heads.

Then, one day, through a near-fatal accident, Leo gains an aptitude that borders on the supernatural. But, his powers of understanding and self-expression are severely tested when he is forced to make it in a “wolfer-eat-wolfer” world. Hardened and battle-scarred, he walks a fine line between being tough and respected by his peers and being cruel and hated by his enemies.

One Tough Cat shares the story of Leo’s hilarious journey as he finds love and harmony in unexpected places and realizes that to be happy, a tomcat doesn’t necessarily have to leave home.

Melanie Moye lives with her favorite feline in Milledgeville, Georgia, where she taught English at both Georgia College and State University and Georgia Military College. Moye also taught Spanish at Brentwood High School in Sandersville.