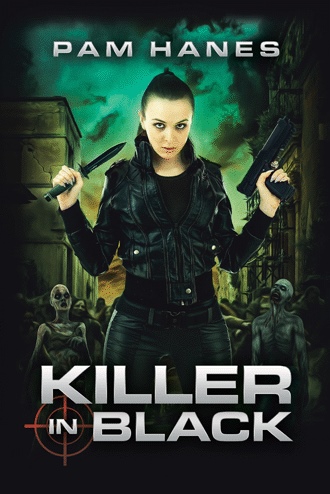 Adam had refused to allow Sarah to leave the safety of their Colony to care for the sick during the night, a precaution which not only saved the lives of the Colonist inside the wall from losing their only medical doctor, it prevented the virus from spreading to their people inside the Colony. Adam would always be thankful that he stood his ground against the doctors persistent arguments to ‘help the sick and dying, as was her duty.’ Sarah’s anger at his restriction soon turned to anguished relief as the recently-deceased come back to ‘life’ and began attacking the people in the waiting area. The Colonists could only watch, helpless and impotent, as, one after another, the living were attacked and consumed by the Reactivated humans, then also ‘reactivate’ and become flesh-eating monsters. Armed with only a few deer hunting rifles, the Colonists’ firepower was no defence against the Regenerated, so, in order to show mercy and to prevent the increase in the reactivated people, they shot as many of the remaining survivors as they could-not realizing, of course, that in order to stop the reactivation of the infected they needed to be shot in the head. However, there were not enough bullets for the hundreds of men, women and children who had sought refuge in what had became their graveyard. Screams of agony, terror, and pleas for admittance from those remaining went unanswered-had to be ignored-but not unheard. Most of the Colonist retreated to their residences in the middle of the Colony, attempting, in vain, to block out the anguished cries of the victims. No one who lived through that terrible time ever forgot what they had seen and heard: the sounds of ripping flesh as the Dead feasted on their victims. Adam, with his sons by his side, gazed out at the carnage surrounding them, realizing that the citizens of the Colony may be the only living humans left on the planet. They would need to do everything they could to ensure that none of their people became like those who were now beginning their endless circling of the property, in search of fresh meat

Distraught over the death of his wife and daughter, Adam Devlin leave the society he no longer wishes to belong. He purchases a decommissioned prison farm and with his sons and friends, who join him in his self-imposed exile, they live, safe and secure, away from the madness of crime-filled cities and a techno-crazed population. Until the end of their world begins.

The Ophidian Virus spreads to all corners of the planet, reactivating the Dead who then attack and eat the flesh of the living. In the aftermath, the survivors of the Colony train Soldiers to hunt and kill the reanimated Dead. Tya Maxell is one such Soldier.

During a Status Challenge against a former First Killer, Tya uncovers a devastating secret: that the society she grew up in was based on a lie. Escaping from the Colony with a prey-child she saves from the Dead, Tya teams up with other survivors who are determined to bring an end to the perpetrators of the greatest hoax on the planet. She must Challenge the corrupt President of the Javier Corporation, who uses the Dead to control the survivors of the Plague. In a life or death battle-not only against the Dead, but against a man who will fight to preserve his power at any cost-Tya must prevail, or all will be lost.

Canadian Author Pam Hanes was born in Ottawa, Ontario on July 20, 1961. Growing up with an insatiable thirst to bury herself into any book which caught her interest, she became an avid reader of Anne McCaffrey (The Dragonriders of Pern Series), Jean Auyl (Earth's Children Series), Stephen King (the master of Horror) and any book in the Horror/Science Fiction/Fantasy Genre. She became fascinated with the Zombie culture after watching the movie 'Children Shouldn't Play with Dead Things' (also known as Revenge of the Living Dead, Things From the Dead, and Zreaks), a 1972 comedic horror film directed by Bob Clark. Her interest in the Living Dead continued after watching Night of the Living Dead (1968) and Dawn of the Dead (1978 and 2004) by filmmaker George A. Romero. She composed a story 'Giganotosaurus Trouble' for the National Novel Writing Month, (NaNoWriMo), where her passion for story telling took flight.

'Killer in Black' is her first novel based on the 'Zombie' theme. She is now editing her second novel, 'A Meeting of the Minds', an alien-human romance, while writing her second 'Zombie' novel, 'Time and Again'.