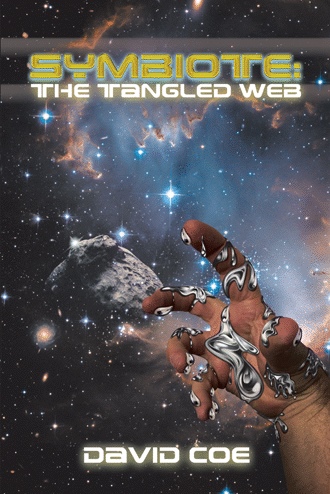 As Sam ran into the room behind Bill Bates, the gunfire was just beginning its ratcheting sounds as round after round began being fired in their direction. She passed both Tibbs and Bannister as she sought cover from the deadly cascade of lead. Now, as the almost absurd gunfire pinned them down, her thoughts turned to the welfare of her team members. She saw the vast number of guards laid low by the EMP blasts only to see two more take the place of every one that fell. As she changed her position to look back toward her team mates, she was ill prepared for what happened next.
Sam felt as if her entire body had burst into flame as she felt her skin flush with heat as her palm had done when holding hands with Bill. To add to her bewilderment, the vision that reached her eyes was an unbelievable sight. Bill lay huddled behind equipment for cover while four bluish grey humanoids she knew were her team mates surrounded him, also huddled behind available cover. The visages before her were smooth and featureless. Their heads were smooth down to the ridge that ran over the eyebrows, with eyes that were like two bluish orbs. From their eyes to the jaw line, there were no features, just smooth membrane that followed an outline of where their face should have been, save for lips that were covered with the same bluish gray membrane. Their entire bodies were covered with this same bluish grey membrane from head to toe. As she stared in disbelief, she could scarce repress her own scream as she glanced down at her hands and arms only to realize that she herself was an exact duplicate of her partners.
For reasons Sam could not fathom, she leapt from her cover and ran toward her team. Maybe it was a feeling of alienation from being covered in a substance she could not control or, apparently, get rid of. Maybe she just wanted to close the void between herself and her team mates, especially if she was going to die here in this underground citadel. She felt something akin to bee stings across her back as she left the secure cover and dove in beside Bannister behind a now useless engine. The door behind them erupted with a large hole left from a projectile that could have only barely missed her. Then the thunderous report followed several seconds behind.
Sniper! Even among the rain of bullets that pelted their position, now they had to contend with a sniper with what appeared to be 50 caliber rounds. As Sam desperately tried to find more cover from her position and return fire, she laid her hand upon Bannister’s broad shoulder…
“…cuz we’re dead if I don’t find a way out of this mess…”
Sam jerked her hand away from John. That had been his voice. His voice inside her head! She was losing her sanity in the midst of all this chaos! It was the only answer.
Halfway from their position to the wall of the room, the equipment thinned out, then stopped. Left was an open space of perhaps thirty feet to a door that exited to the left. It was toward this door that John Bannister sprinted. It was his though that if it could be opened, it would afford an escape route from the situation they found themselves in. Perhaps fifteen feet from the door, John was lifted from his feet and smashed backwards into the support girder of the back wall. The thunderous report that followed told Sam what she already knew. John had found himself in the sights of their enemy’s sniper. Sam watched in horror as John slowly regained his feet, only to again be slammed by an unseen force, this time sprawling him facedown upon the floor. The thunderous report again following seconds behind. John lay still.
Anger flooded over Sam. She cared not if her life was forfeit. They would pay for the treatment of her team, for the indignity of the death of such a noble partner. She rose from her cover, only to see three other humanoid figures rise almost simultaneously with her. The EMP blasts became an almost constant flow from their weapons. The bee stings she had felt earlier, she realized, were not stings at all but rather the lead of countless rounds deflected from her body by the bluish grey membrane that now covered her and her team. She saw Connor in front of her as he ended life after life as he fought his way forward, the lead deflecting off him as well. She heard the soft reports of the EM 150’s behind her. Banshee team would not die. They would fight insurmountable odds and live. They would win!

When Intelligence reports reveal that enemies of the United States have obtained a meteor with metals that might revolutionize the aerospace industry, General Montgomery Upton is tasked with building an elite special operations unit, codename: Banshee, to confront the mysterious organization and seize the meteor for the United States.

However, as an elite military Special Ops team, who do you trust when everyone you thought you could depend on proves untrustworthy. Exposed to an alien Symbiote and fighting for their lives, Banshee team must battle not only their known enemies but their unknown as well, all the while contending with a strange, other worldly creature that now lives inside them. Who is the Scepter organization that seems to be somehow mixed up in all this? How did such a strange meteor become involved in such life changing events? Who is the formidable Red Devil that hunts them with a murderous passion all his own? It’s continuous twists and turns as the team is plunged into a world of espionage and deceit that takes all their training and determination just to stay alive.

Join the Banshee team members as they proceed ever deeper into the realm of the unknown and take us on an adventure the likes of which we have seldom read!

With over thirty-one years as a firefighter, David Coe knows what it feels like to have your heart pump and the adrenaline flow. His fast paced, “can’t put it down” books propel readers into the unknown and take us from one thrill to another at breakneck speed. Reality bends and our minds never return to their former concepts.

As a lifetime fan of action and science fiction, David uses his vast imagination to take the surreal and unexpected and make it commonplace and believable. His books are a great repass for the true Science Fiction reader!

David currently lives in Texas. He is married with four children and 12 grandchildren.