by Guy A. Sibilla 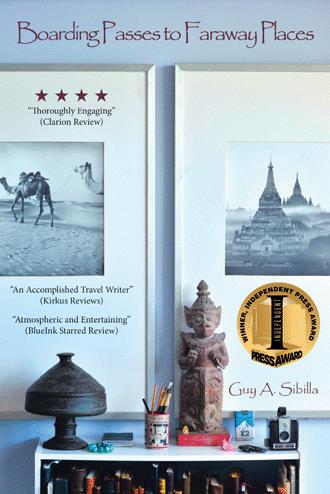 One night at camp I walked over to the latrine and entered the tented area. As protocol required, I picked up a stick and banged on the wooden seat and around the hole before I sat down to chase away the spiders that liked to call that place home. While I waited for nature to take its course, I looked down as my headlamp tracked the movement of the plumpest, hairiest, most arrogant example of a tarantula I had ever seen.

When I described it in a story, I used the phrase that it appeared to be “roughly the size of a moped.” I was quite motivated at that point, scooped some lime, and gingerly got out of there. As I was leaving, I walked past a young, pretty undergrad who was waiting in line. I held the tent flap open and said something to the effect of, “Be sure to bang on the box. There’s a spider in there!”

She gave me that really? look.

When I returned to the campfire, I was laughing quietly to myself when Sarah asked me, “Hey, what’s so funny?”

“Wait for it,” was all I said. With that, a scream taken from the sound track of the Texas Chain Saw Massacre came from the direction of the latrine. I explained to my group what I saw and what I said to the undergrad.

If the bugs and arachnids weren’t enough ways to get sick, there were the thorns. The poetically named bayal vines were a wispy green growth covered with thousands of thorns of hypodermic needle-like sharpness. If you inadvertently caught a loose end on your clothing and kept walking, the remainder of the vine would build tensile energy like a stretched rubber band. Unless you backed up slowly, the vine could snap and send an array of thorns into your soft flesh like a series of machine gun bullets across a wall.

Then there were the snakes. This jungle had lots and lots of snakes. These were not serpents in the Shakespearean sense of that word; “O serpent heart with a flowering face!” Unlike Juliet’s challenge to Romeo’s motives, the assortment of Central American snakes was far less amorous. They were prepared to envenom any one of us surveyors with a dose of a neurotoxin or hemotoxin at a moment’s misplaced footfall. It was Disneyland for herpetologists.

I prepared myself before I left home with a morbid inventory of death-by-snake-bite scenarios. It began with the Maya Coral Snake. It enjoyed one of the deadliest neurotoxic venoms on earth.

As frightening as that sounded, I had a personal aversion to the Fer-de-lance. One snake expert in camp labeled this member of the pit viper family as grumpy. I don't want to get off on a rant here but I happen to use that adjective to describe myself in the morning before I have had a cup of coffee. No one dies though, if someone surprises me say, in the kitchen. I did in fact meet a Fer-de-lance early one morning in camp. I awoke, grabbed my toothbrush and walked a few steps from my bunk to brush my teeth in the cool, green halo of dawn. Just as I went to spit a mouthful of saliva mixed with Crest, a few feet away a viper this big slithered out from under some leaf litter and stared at me with that grumpy sort of look. I took the hint and slithered back to my bunk.

Then there was the Neotropical rattlesnake. Enough said.

To round out the rest of the crew, there were pit vipers like the Mexican Moccasin, the Jumping Viper, the Hognose Viper, and the Eyelash Viper.

To this day I refuse to conjugate the infinitive “to envenom.”

The goods news was that most of these snakes hunted at night when their infrared sensing zones made them unmatched killing machines for animals walking around with the false belief that the cover of darkness protected them. The bad news was this group of nastiness hid in the shadows of fallen trees and leaf litter that we, as surveyors, traipsed across all day long.

This entertaining and engaging collection of travelogues offers road warriors and arm chair travelers alike stories from distant, isolated locales in a loop encircling the world. Sibilla describes his chance meeting with the President of Guatemala who choppered into a jungle LZ next to his mules, the surreal morning he awoke in Rangoon on his birthday, living in a Tibetan Buddhist Monastery in Uttar Pradesh, India, sleeping among the moai of Rapa Nui (Easter Island), and many other stories of relentless adventuring.

From the Indian subcontinent to the Middle East, from Africa to Central America and finally across the vast Pacific Ocean, this collection of stories illustrates that, as Robert Louis Stevenson suggested, the great affair of travel is to move. With an acute eye for detail and an irrepressible sense of wonderment, the narratives here reflect the thrill that comes from arriving at a destination without a plan, from wandering at the suggestion of strangers and the feeling of exuberance you experience when you let go and allow the path to choose you.

Guy A. Sibilla is a writer who presently lives in Honolulu, Hawaii. He attended the College of William & Mary in Virginia and while living at various times in Germany, Italy and the United States, traveled throughout the Americas, Europe, Africa, Asia, Australia and the Pacific Basin. His award-winning stories and photographs have appeared in magazines and newspapers within the United States and abroad.