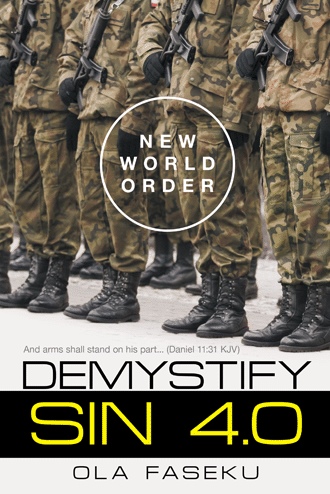 ARMS AND AGENTS OF THE MYSTERY OF INIQUITY

All strong indications attest to the fact that it is clearly time for them to show up now and they are already here in droves. These agents and arms- club members of the spirit of the mystery of iniquity are various people and institutions charged with the responsibility of setting up That man of sin- the antichrist and the kingdom of the beast, a task currently being frantically accomplished with unimaginable desperation.

They are involved in a global effort which is currently moving at a wild (frenetic) pace, very easy to see but also very easy to miss as well, if we don’t pay close attention, and if we don’t know or understand our scriptures very well.

These club members of the spirit of the mystery of iniquity are the evil (wickedness) working under cover of darkness, working to manifest the worst imaginable kind of wicked bondage upon humanity- the whole world. We will soon find out who they are, how to clearly recognise both them and their work across the world in their preparation to hand over of ‘supreme’ (they would hope) political power to the antichrist- their master.

These agents, working in a pack under the guidance, direction and authority of the spirit of the mystery of iniquity, are ambitious guys and girls who think they are very smart. They are not too difficult to spot if we will learn (understand) what to watch out for. Watch and pray! Watch refers to our ability to focus on scriptural references of endtime markers of the collective destination;

We know exactly where we are headed from very simple knowledge of scriptures. However, to acquaint ourselves with what is going on and how we will get there, all we need do is listen to, and observe the policy thrust and objectives of the various arms and agents of the spirit of the mystery of iniquity as they declare and pursue its agenda. The agents are foot soldiers (messengers, enforcers) who receive spiritual messages (words with serious spiritual implications) to carry under the coordination of the spirit of the mystery of iniquity implementing its programmes.

The spirit of the mystery of iniquity agrees and is full cooperation within its ranks of subscribing agents and arms identifiable through their respective involvement in the decipherable agenda (the end of which is already set for us in scriptures). they are exposed by the content of speeches, rhetoric, body language, nuances, relationships, connections, interactions, etc.

In full agreement with each other, various arms (institutions) issue policy to fulfill the agenda of the spirit of the mystery of iniquity, the realisation of which its arms and agents delightfully pursue (implement) as the work and responsibility to which they are pre-appointed (have been assigned) to get us to the collective destination defined in scriptures.

Watch and pray! Watching and listening to these arms (institutions) and agents as they urgently go about getting the task of preparation for their kingdom (the kingdom of the beast) done, as they work to fulfill (impose) the mystery of iniquity agenda over multitudes (masses) much like herding sheep with actions as well as pronouncements, making use of the power of spiritually spoken words over people for deception, manipulation and control, shows us how they seek (intend) to achieve their objectives.

Some of these objectives are masked as noble ideals which will serve to get majority of masses to peacefully self- subordinate to what will eventually manifest as, and end up in tyranny. It is only normal that the agenda of the mystery of iniquity should by every means appear to be the most noble ideals imagine-able, advancing the cause, good and progress of humanity. However, it is all deception. Beware!

For maximum possible effect of entrapment, it is very important that the coming of the antichrist … that man of sin has the semblance of all morality, espousing of lofty human ideals e.g. equality, non- discrimination, concern for the planet etc., to suck as many people into its vortex as possible with distractions to ensure suspicions are not unduely aroused until dominion is fully in place.

We will continue to see different agents harping on the same message based on one and the same broad agenda. It becomes progressively easier to identify institutions and agents and to clearly know who is who, once the message of the agenda of the mystery of iniquity (predefined by scriptures as a collective destination) has been defined for dissemination.

Even though the main work to reveal that man of sin and the means are mainly institutional, spiritual and religious, yet clearly the bulk of the mission of the mystery of iniquity is eventually political- world dominion. The antichrist will hold political power by which he will assume office, appointing himself as GOD (as the object of compulsorily worship) supported by the authourity of an all-inclusive religious system representing most religions.

The dominion of the enemy (which is the devil), and the permission he has received to manifest (unfold) the peak of the dominion before it is wrapped up, makes it quite easy for his spiritually empowered satanist agents to basically control politics and the core of critical endeavours for the fact that it is their time and in line with the un-restraining of the mystery of iniquity. (KJV)

LUK 4: 6-7 6 And the devil said unto him, All this power will I give thee, and the glory of them: for that is delivered unto me; and to whomsoever I will I give it. 7 If thou therefore wilt worship me, all shall be thine. (KJV)

The revealing of that man of sin by the mystery of iniquity (probably undiscernable to ordinary observation) involves sophisticated coordination on many fronts by different, seeming unrelated ends of what is essentially the same spectrum of objective.

The objective of coordination by the mystery of iniquity of all the collaboration, consultation and deliberation in darkness- spiritual fellowship, is to manipulate, prime, condition and to prepare the hearts and minds of vast masses to be ushered into the NEW WORLD ORDER. The ultimate objective is to set up the structures to fully reveal and empower the antichrist- that man of sin.

Agents of the mystery of iniquity in politics executing agenda, jostling for position in their kingdom (in the NEW WORLD ORDER) are ably supported by other agents who transverse various fields of endeavour, all being in close collaboration, consultation and spiritual fellowship inside darkness. 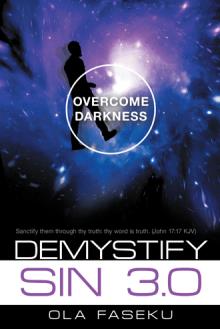 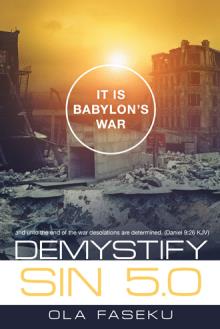 De-Mystify Sin explains how making a simple commitment to honour covenant and to obey commandment provides means to overcome sin, the devil and his powers of darkness, and how it provides leverage to overcome temptation, persecution, the antichrist, and the kingdom of the beast that is coming along very soon. De-Mystify Sin shows us how we will achieve all that easily with minimum fuss; how we will achieve the deepest fulfillment and soul satisfaction in the current form of human existence.

De-Mystify Sin 4.0 shows us what is going on inside the kingdom of darkness: what the entirety of evil and darkness is up to. It gives us information on very simple techniques to help us effectively deal with the imposition of evil that is in progress across the world. De-Mystify Sin 4.0 shows us clearly how we will deal with the antichrist, his agents and the kingdom of the beast in a very practically manner; how we will overcome the antichrist, his image, his mark, the number of his name, etc. De-Mystify Sin 4.0 explains the true nature and spiritual basis of the wars ahead of us as well as the significant events that are in the offing.

A chartered professional in multiple disciplines, he is a child of GOD, true believer in Jesus Christ, called by GOD, elect by grace as an evangelist. He has a passion for the art of spiritual warfare, having been trained, and having overcome unimaginable adversity.

He received the spirit of wisdom and revelation in the knowledge of Jesus Christ, as well as understanding of scriptures, insight into darkness and knowledge of the times. He shares truth clearly without fear.