Beyond the Scarlet Door 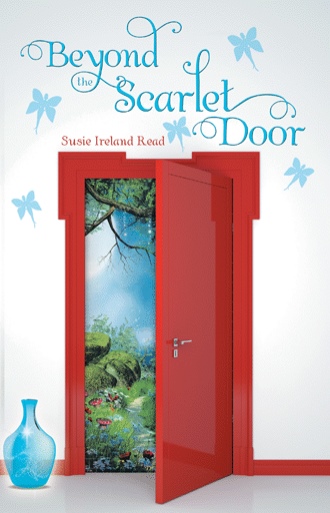 Standing in the doorway of their older sister’s sickroom, twelve-year-old Maleeya gave Kieran, her younger sister’s hand a reassuring squeeze.  Maleeya couldn’t say it out loud but as she stared at the four poster bed that seemed to be floating in a cave a darkness, she was beginning to think that fifteen-year-old Sierra might never get well.  Mustering all of her courage she quietly called out, “Sierra.”

“Mal—leeya?” mumbled the groggy teen.  “What time is it?  Is it the middle of the night?

“Will you have to go to the hospital?” asked Maleeya, switching on the bedside lamp.

“Most certainly not!”  exclaimed a harsh voice.

“Commander Pippy,” whispered Maleeya under her breath.  A huge knot formed in her stomach as she watched Sierra slowly sink deeper and deeper beneath her denim blue quilt.

Nurse Pippy, dressed in an unusual black uniform, stalked across the room and slammed a mug down on the wooden table top.  With the flare of a matador she ripped back Sierra’s covers with one hand and thrust a thermometer into her patients mouth with the other.

Maleeya couldn’t believe the changes that had taken place in their lives during the past few days.  Their grandmother had been injured while traveling and their mother had flown to Ireland to help her make the trip back home.  She, her father and sister had gladly accepted the task of taking care of Sierra and the three of them had been doing a pretty good job of it until the militant nurse had shown up on their doorstep.  She shivered at the thought of that first meeting as the memory came flowing back to her.

The doorbell had rung.  Mi, their usually mild mannered dog stood growling in the hallway.  A cloud of dread had rushed over her as she had opened the door that fate filled day.  She had stood face to face with a woman dressed in black, a burlap bag hanging from her shoulder like a huge growth.

I’m here to take care of Sierra Wright.  Please let me in,” commanded the woman, taking a step toward the threshold.

Scooping up the now barking dog, Maleeya said, “I’ll have to get my father,” and slammed the door in the scary woman’s face.  She raced down the hall and skidded to a stop in front of her father’s desk.  Gasping for air, she stuttered, “There’s a—woman at the door—she says she’s here to take care of—Sierra.”

“That’s odd!” exclaimed Daddy, rising to his feet and stepping around his desk.  “I was just about to call the Dr. and ask for a nursing agency referral.  I wonder if your mother had something to do with this?”

Nervously stroking the white terrier’s soft head, Maleeya asked, “You wouldn’t let just anyone take care of Sierra, would you Daddy?  Mi growled at her, and he’s never done that to anyone before.”

Daddy put his hands on his daughter’s shoulders and gently steered her out of the room.  “She can’t be that bad, Maleeya.  I’m sure Mi will get use to her once she’s been here for a while.”

Greeting the scowling woman with a smile, Daddy said, “I’m William Wright, and this is my daughter Maleeya.  Won’t you come in, Ms. . . .

“Pippy, stated the irritated woman shifting her cumbersome bag from one shoulder to the other She looked more like a commando than a nurse.  “Your wife called for a nurse to take care of her ill daughter.  I am the nurse you were expecting.”

“I’m sorry, but I wasn’t expecting anyone,” replied Daddy, ushering the woman into their sun lit living room.  “But it’s just like Leigh, to think of our children first.  You see my wife left quite suddenly, we found her cell phone here at home and we haven’t been able to reach her.  Can you show me some type of identification, or give me some references, Ms—what was your name again?”

The nurse plucked a badge that hung from a strap around her neck and flashed it through the air like she was wielding a sword.  “N—urse Pippy,” stuttered the woman through clenched teeth.  “She said that she didn’t have her hand phone and that she was calling on a bad—      “Phone line,” added Maleeya a little sarcastically.  “Did you also mean cell phone?”

“Yes, yes, cell phone and phone line.  I am old fashioned in my ways, but I assure you, I am more than capable of taking care of a bedridden child.  If you would just show me the way!”

“You must be mistaken, Miss Pippy, my daughter is not bedridden.”

“The child is lying in a bed is she not?” snapped the rattled nurse.  “It is Nurse Pippy.”

“That she is Ms.—Nurse Pippy, replied Daddy, a slight smile on his lips.

“We don’t have that kind of time,” said Daddy, frowning.  My book is under a deadline and I’m—I mean; we’re having trouble taking care of—just about everything around here.  We need a nurse, and your mother was thoughtful enough to send us one.  You take Mi to the kitchen while I show Nurse Pippy the guest room and introduce her to Sierra.”

Maleeya’s shoulders slumped in defeat.  Once her father’s made up his mind, it could not be changed.

Kieran squeezed Maleeya’s arm bringing her back to the present.  Slowly Sierra’s room came back into focus and she let out a long sigh.  She had been right about the nurse, but she couldn’t convince her father of it.  The nurse had turned out just as nasty as Maleeya had felt she would be. She was always rude and had shooed the girls out every time they had attempted to see their ailing sister.

If you’re like most kids, you sometimes don’t get along with your brothers and sisters. But if your siblings needed you, you would do everything you could to help them.

In author Susie Ireland Read’s Beyond the Scarlet Door, Maleeya and Kieran Wright have an older sister, Sierra who is very ill. Their whole world begins to fall apart when Nurse Pippy arrives on their doorstep insisting she is there to take care of the ill teen. Unfortunately, after the nurse’s arrival, Sierra gets worse instead of better.

When Sierra asks to see a pink fairy, the girls assume she wants to see a fairy statue. Anxious to do anything that will make their sister feel better, Maleeya and Kieran, along with their dog, Mi, go on a quest to find the pink fairy. Little do the sisters know that such an innocent request would lead them to the beautiful, yet treacherous world that lies beyond the scarlet door.

Follow Maleeya and Kieran, reduced to the size of white mice and carrying a backpack filled with seemingly useless items from home, as they overcome fears that lie deep within their souls. Can they outwit Raven, the evil fairy and bring back seven items needed to save their sister? What magical creatures will they meet in this new world, and will they be friends or foes? Lastly, what family secrets will   the sisters discover that could change their lives forever?

Susie Ireland Read has enjoyed writing for many years. She lives with her husband in the Kansas City area and they have two grown daughters. Beyond the Scarlet Door is her first novel.