A Tale of Two Cats 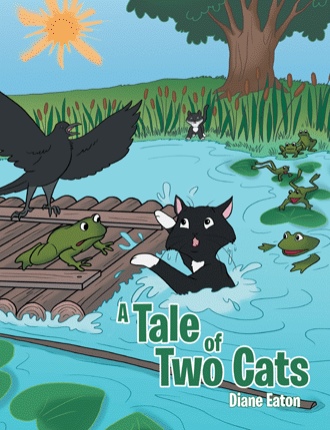 It was morning and Bingo and Buddy had just finished their breakfast. Their mother and father were on the way to the grocery store. “Bingo you be sure to keep Buddy out of trouble while we’re gone,” said his mom.

Bingo and Buddy went into the den. Buddy took each toy out of the box and played with them. He threw a stuffed mouse in the air and chased a ball with a rattle in it. Bingo decided to go upstairs and take a cat nap on a sun spot in the hallway. After a while Buddy noticed that Bingo wasn’t there. Buddy wandered from room to room looking for Bingo and couldn’t find him. Then he decided Bingo must be upstairs and off he went.

Meanwhile upstairs Bingo was lying in his favorite position, on his back with his feet in the air. The sun was beating down on his belly and he was thinking: What a life! Just then something landed on him with a crash. Bingo opened his eyes to see Buddy sitting on his belly. “Great, just what I need. What do you want?” “I came to see if you want to play with me.” “I really would like to sleep,” said Bingo. “I really would like to play,” said Buddy. “Great!” said Bingo, “Make my day.” Bingo was a smart cat and he had a plan.

“I’ll tell you what we’ll do. How would you like to play hide and seek? You count to one hundred and I’ll go hide and then you can come and find me.” “But I don’t know how to count,” said Buddy. “Well just sit there for awhile and then come and find me.” Bingo had this all figured out. While Buddy was counting and looking for him, he would find an inconspicuous sunspot and take a nap.

“Follow me,” said Bingo. He took Buddy into the bathroom. “Now you stay here and count and I’ll go and hide.” At that Bingo turned on his heels and quickly started to look for a place to hide. Buddy jumped up on toilet seat and sat there looking around. Then he noticed a box of tissues on the back of the toilet. He reached up and pulled one of the tissues out of the box and watched it float to the floor. He thought that was interesting. So he reached up and pulled one, then two, then three tissues out and watched them float to the floor. Now this really was fun! Before he knew it he was pulling tissues out of the box so fast that they were flying all over the room. Suddenly the box was empty.

Then he jumped off the toilet seat and jumped up on the sink. He stepped on an open tube of toothpaste and got toothpaste all over his paws. Then he sat in the toothpaste. He felt like he was sticking to the counter. Buddy looked around the room and spotted something on the wall that caught his eye. So he jumped down on the floor and jumped back on the toilet seat. He now had a tissue stuck on his paw and one on his tail. The thing he had spotted on the wall was a roll of toilet paper. He reached out and took a swipe at it. The next thing he knew the paper started to unroll all over the floor. He got so excited that he jumped off the toilet seat and grabbed the paper in his mouth and started to run around the bathroom. Now he had paper stuck on his butt as well as his paws. He wrapped the paper completely around his body and was finding it hard to move. He was having the time of his life but soon he realized that maybe he was in trouble. He laid there on the floor wondering what to do next. There wasn’t much he could do except lay there and wait for help.

Meanwhile Bingo woke up and realized that Buddy hadn’t found him yet. Bingo started to worry about what had happened to Buddy. He decided he better start looking for him. Bingo thought he would start by looking in the bathroom. Bingo walked into the bathroom and every hair on his body stood on end.

There was Buddy lying on the floor looking like an Egyptian mummy. The bathroom looked like a tornado went through it. “Boy! We are in big trouble. How did you manage to make such a mess?”

Just then they heard their mother calling. “Bingo, Buddy, where are you?” Next thing they knew she was standing in the doorway. “I’m not sure if I’m in shock or just amazed at how you two could possibly have done this.” She walked over and picked Buddy up; “Boy, are you a mess!” She slowly started to unwrap the sticky paper off of him. He was glad because he was getting very warm. “I think I’d better give you a bath.”

She carried Buddy downstairs, gave him a bath and dried him off with a towel. She told them to take a cat nap and she went upstairs to clean the bathroom. When she came downstairs they got a lecture on being destructive. Bingo felt bad because he hadn’t done a good job of taking care of Buddy. Buddy on the other hand was thinking about how much fun he had. Bingo was beginning to realize that babysitting Buddy was going to be a full time job.

One-year-old Bingo is extremely happy when the Browns adopt him and take him to their farm. He’d been at the shelter a long time. But when Buddy, a small kitten from Virginia, joins the family, he finds himself in charge of the new animal. It’s not exactly what Bingo had in mind.

Despite their similar appearance, the two cats are as different as black and white. Bingo’s idea of an idyllic life is to sleep on sun spots. He loves to help his dad drive the car. Buddy wants to get outside and see the world. He loves the garden and enjoys smelling flowers and meeting all the strange animals that visit there. The two mismatched cats set off on adventures that sometimes get them into trouble and other times are heartwarming experiences.

When two of the neighborhood kids meet the cats, it doesn’t take long before the whole neighborhood bonds together. Bingo and Buddy are included in just about everything that happens, including trick or treating on Halloween.

This book for young readers shares a story of two cats, their antics, and the lessons to be learned.

Diane Eaton lived on a farm for many years and was inspired by the antics of her cats to write this book.