Our Lady and the Guardian 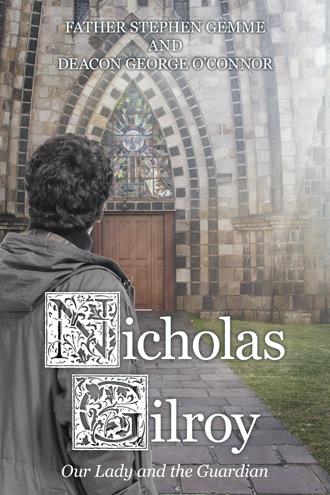 The days of tutoring young Theresa were joyful for Nicholas. He looked forward to seeing her and learning right along with teaching her. She was a good student who enjoyed reading and math. Nicholas was not a great student himself, but he was competent and a hard worker, and he would prepare his lessons with diligence.
Theresa on her part was always joyful and always greeted Nicholas and Sister Marie with a big hug and a big smile. "My Grandmamma always says, share the joy of the Lord in all you do and say."
Nicholas hoped to meet Theresa's Grandmamma someday. She must be a remarkable woman of faith, he thought. A truly holy person.
It was the Tuesday before Thanksgiving and Sister Marie thought that it would be the perfect time for the seminarians and their students to thank God for bringing them together. She bought a big sheet cake and drinks for them to celebrate.
Normally the boys would leave before their students to take the van back to Saint Peter's. But today Sister Marie had arranged with the seminary to have the boys stay 30 minutes longer.
The little party between the students and their tutors was almost coming to an end when Adam and Lemont, wearing the colors of their gang the Guardians, walked into the school's cafeteria. Both appeared to be tough and strong, and even dangerous. Nicholas with his back toward the entrance was sitting across from Theresa, so he didn't see Adam or Lemont as they walked up to their table.
It was only when Theresa exclaimed, "Oh, Adam. Now you can meet my friend, Nicholas," that Nicholas turned around.
Nicholas dressed in his school uniform, a white shirt and tie, seeing what appeared to be a giant towering over him said, "Hello, my name is Nicholas and I am Theresa's tutor." Without hesitation he then stretched out his hand, but Adam did nothing to shake it. Oh, Nicholas thought, this doesn't look good.
Now Adam was looking at him with disdain as he said in a very intimating voice, "I am Theresa's brother, Adam, and I don't care who you are. Just do your job and we will not have any problems." Reaching into his pocket, he pulled out a knife. "Are we clear on that?"
For the first time since coming into the city, Nicholas felt real fear.

Since he was in the first grade, fourteen-year-old Nicholas Gilroy has felt that God might be calling him to be a Catholic priest. To determine whether he has a vocation, he applies and is accepted as a freshman at Saint Peter’s High School Seminary.
Nicholas, who has been homeschooled, is overwhelmed by the size of the building. He is also intimidated by the vice rector, Father Stephen Reynolds, who, from Nicholas’s perspective, should be in the marines and not in a seminary. The young man soon develops a friendship with Jose and Luke, two other freshman boys, which helps him to achieve success on the football team and to enjoy his new life at Saint Peter’s. But when Nicholas signs up for an after-school program to help tutor children in the inner city, he finds himself thrown into an adventure that puts his life at risk and changes him forever.
In this novel, a teenage boy enrolled in a seminary participates in an after-school tutoring program in the inner city and comes face-to-face with life-changing danger.