Time and the Multiverse

The Foundations of Human Existence 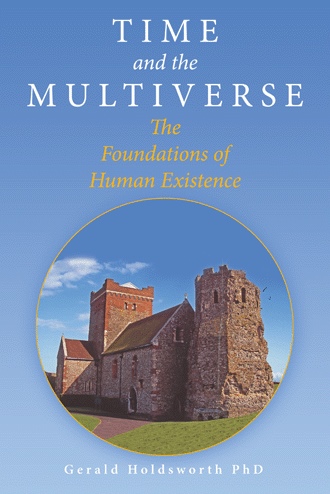 Today, many people conditioned over the years to quantum mechanics weirdness are ready to believe that our universe operates as a ‘whole’, rather than just a collection of separate parts moving around independently. David Bohm tried to instil this concept into us over three and a half decades ago. I realized that the multiverse which I discovered could be looked at in the same way. While movement of universes is directed forward, information transfer is directed in the reverse direction. It follows that there must be communication channels between universes. Moreover, information from our past (retrocognition) as well as from our future precognition) is available, as the empirical data demonstrate.

As planned, during this exercise, I hadn’t looked for possible hints from books or the internet, other than what I may have remembered from earlier readings of various science books: I knew terms such as ‘block time’, a “closed universe” solution, that “there is no distinction between past present and future” (attributed to Einstein), and even “Time exists in order to stop everything happening at once!” That is not just a good quip; it is actually contrary to what you will find out in Chapter 2.  I had never heard of John W Dunne, the British Army soldier, aero-designer/engineer, and test pilot with a side spin on trying to figure out from his frequent precognitive dreams how the future can be revealed to us. His ‘solution’ of the time problem was reached in the mid 1920’s after working long hours at his drafting board (just as I did) and producing a strange looking geometrical diagram that few, if anyone, could understand. This may be found in his 1927 book ‘An experiment with time’ which I ‘discovered’ in 2008.

Late that year I began to systematically test my model of the multiverse for its predictive abilities. I began to rely on internet resources in order to strengthen my claims and quickly became a victim of “google-itis”, but it was actually the internet that helped me through.

I began to show the symptoms of a time haunted man, a term used by John B Priestley whose thoughtful and colourful book ‘Man and time’ I also acquired.  This list expanded to include books written by or about specific people who turned up in the initial roster of books. Historical figures such as  Alfred North Whitehead, Arthur Eddington, Albert Einstein, Wolfgang Pauli, and others all the way up to modern writers of new age physics books on time, including the physicist turned philosopher and science writer Paul Davies, formed an impressive list.

In the end I had close to a hundred books of this genre in my library. I even procured Agatha Christie’s autobiography because it contained a wonderful unique paragraph about John Dunne’s book. It must have referred to the first (dream) section of the book because no reviewer of that book and certainly not a crime mystery novelist has ever demonstrated to me an understanding of the second half of Dunne’s book. This is where Dunne lost his connection with reality.

By 2009 I realized that I had taken on an immense task and all the draft chapters needed an immediate and serious rewrite and triple polishing.  Otherwise, considering the steady growth of ideas in cosmology, I might just get ‘edged out’ by another attempt at the same quest. I had learned from reading Carl Jung’s Memories, Dreams and Reflections that there was such a concept as “the collective unconscious”. This sounded to me analogous to an immense natural internet-like ‘resource’. The manuscript started with the provisional title of ‘Discovering a Multiverse’ which morphed into ‘Exploring a multiverse’ followed by ‘Exploring the multiverse’, ‘Man and the Multiverse’… the list kept growing. It was illustrated with geometrical diagrams which were based on what I referred to as the Blueprint and the Cosmological model, that is derived from it. This described a serial time-zoned multiverse arranged in a closed loop. Only 9% of the book is taken up with these details; the remainder of the book concerns the interpretation and verification of the model in its many aspects.

In order to take a break from the geometric formalism that had crept in (much as it did with John Dunne) I wrote Chapter 4, which gives thumbnail sketches of many interesting and well-known characters whose lives overlapped with Dunne’s life and may have had some slight influence on his very singular mode of thinking.

I had earlier kept expectantly checking the internet to see if there was anyone developing such a new creation as a serial time-zoned multiverse (STZM). By 2014 I was having raw chapters edited. I had then stopped interrogating the internet for new developments. In October, unknown to me, a journal article was published that was to have a significant bearing on the presentation of the multiverse model that I had developed. In early 2015 my editor alerted me to this new theory called the Many Interacting World’s (MIW) hypothesis, modelled on a new interpretation of quantum mechanics. Because of this, parts of chapters 5 and 6 had to be rewritten.

The significance of ‘time’ had taken on a new twist when I attempted to present geometrically a concept of the ‘Now’ moment. This resulted in another change in the title of the manuscript to ‘Time and the multiverse’, which has turned out to be final.

Four positive results were that (1) as seen in the cosmological model, the multiverse supported the existence of precognition (2) there are two distinct but interacting types of ‘time’: one being a timing system ubiquitous throughout the multiverse; the other being the human devised clock ‘time’, (3) the STZM is complementary to a theoretical quantum mechanical based multiverse (MIW), and (4) using a spiritual link, the purpose of the multiverse became evident: it provides a vastly expanded stage for incarnation of souls compared with a single universe.

Is there a mechanism through which some people can see the future? How can a life in this universe be predetermined? Where might information about the future exist? If we are to have faith in our grasp of physics and cosmological principles, it must exist outside this universe. How can we structure a multiverse so that it broadly accommodates precognition?

In Time and the Multiverse, author Dr. Gerald Holdsworth addresses these questions and more and discusses phenomena that cannot be explained by the principles of established physics. Holdsworth accepted the challenge of explaining the basis behind the common experience of precognition, the easiest phenomena to verify but the hardest to explain. He tells how he built a looped version of the serial, time-zoned multiverse which exhibits time zoning within the regular clock time system as well as revealing what can be termed a timing system, which coordinates the processes within the multiverse’s Cosmic quantum computer. This second time is in practice represented by a fixed frequency of time pips occurring within the computer.

What I present in chapter 2 of this book concerning the dynamics of the multiverse cannot be described by mathematical equations because the physics isn’t available. I have relied entirely on logical statements and geometry to produce the Cosmic Blueprint and, from a special case of it, the Cosmological model.

Arthur Eddington and Wolfgang Pauli knew that to achieve a complete understanding of our existence one has to include all the unexplained anomalies (like precognition) along with established physics: quantum mechanics, particle physics and Einstein’s gravity theory. Eddington and John W Dunne realized that time would play a major role in tying together all the evidence. Dunne’s attempts ending in 1955 were invalid due to his deliberate exclusion of the existence of multiple universes. He did at least finally confess his spiritual experiences.

Gerald Holdsworth, PhD, was educated in New Zealand and the United States. For four decades, he researched in both polar regions in the field of glaciology. He’s published more than 120 articles in journals and popular magazines and has contributed to several scientific books and government reports. Holdsworth was a research scientist with Environment Canada before working at the Arctic Institute of North America, University of Calgary. He lives in British Columbia.