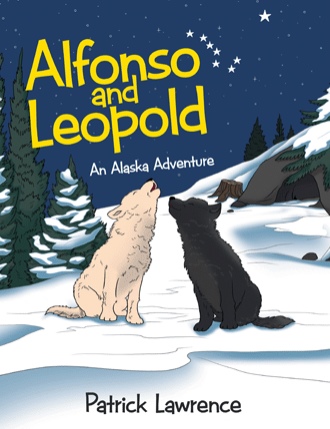 Working their way through the thick snow, tongues hanging long from the hard work, Alfonso heard an unfamiliar noise.
"Shhh," he said. "Quiet!"
And then they both heard a high-pitched wail. It wasn't far off, and sounded friendly enough.
"Let's have a look," said Alfonso, and before Leopold could object, he took off toward the sound.
By the time Leopold caught up with his brother, Alfonso was practically none-to-nose with a very young mountain lion, sometimes also called a cougar, or panther.
The young mountain lion arched it back, hair standing straight up, and tried it's best to look fearsome indeed.
Alfonso was not impressed, returning the young mountain lion's hiss with his best growl (finely tuned after weeks of practice).
The kitten turned and ran just as fast as it could, with the two wolf pups in close pursuit.
"We are rulers of the forest," shouted Alfonso, feeling clearly superior. "We cannot be defeated! We are...Oh! Oh!"
Alfonso was again nose-to-nose, but this time with a very large, very angry mountain lion mother.

It’s January in Alaska when two wolf pups wake in the dark of night while their parents are out hunting for food. Alfonso is the more adventurous of the two, both curious and brave and always ready for an adventure. Leopold, on the other hand, prefers to stay close to the den.

Alfonso and Leopold, a picture book for children, follows the two brothers as they encounter other animals and humans on a winter night in Alaska. It tells a story of survival, sibling rivalry, and self-discovery.

Patrick Lawrence is a former resident of Valdez, Alaska, where he was a faculty member at Prince William Sound Community College. He has traveled extensively throughout Alaska and spends most of his leisure time fishing, hiking, and camping. Patrick lives with his wife in Colorado Springs, Colorado, and Venice, Florida.