Giving Up Power and Following Jesus 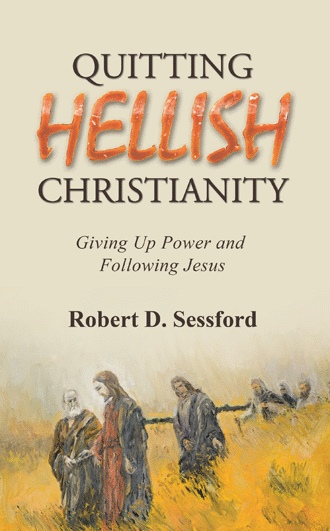 "Onward Christian soldiers, marching as to war..."
That was one of the first songs I learned in the church. But is that what our Lord had in mind? Somehow I have trouble picturing Jesus (whether in body, or in Spirit) leading a boisterous crowd of faithful followers forward to claim new lands, new hearts and new power, a Roman cross lifted up high and at the front of the procession.

“And he summoned the multitude with His disciples, and said to them, “If anyone wishes to come after Me, let him deny himself, and take up his cross, and follow Me. For whoever wishes to save his life shall lose it; but whoever loses his life for My sake and the gospel’s shall save it. For what does it profit a man to gain the whole world, and forfeit his soul? For what shall a man give in exchange for his soul? For whoever is ashamed of Me and My words in this adulterous and sinful generation, the Son of Man will also be ashamed of him when He comes in the glory of His Father with the holy angels with Him.”” Mark 8:34-38

When Jesus shared those words, he shared them with people that were not influenced by two thousand years of Christian culture. To his disciples, and to the multitude that he summoned closer, the cross was not a religious symbol. Nor to their minds was it a beautiful foreshadow of the payment for sin. It wasn’t an icon to scare away demons. The cross was not an emblem to sew onto banners. And definitely, without any doubt, the cross was absolutely NOT that which we most often think of today and include in the songs we sing; the cross was not a metaphor for the struggles and inconveniences of life. The cross was one thing only – a complete end to being able to do anything about anything with our own power. Especially a complete end to any hope of retribution, retaliation, liberation or victory. People that took up their cross in Jesus’ day carried it to their death. How could anyone that carried a cross against their enemies be victorious?
Many of those people thought Jesus was the messiah – the one that would bring retribution to those pagan Romans and re-establish the Kingdom of David. They were waiting, hanging on every word; listening for the signal – Take up Your Sword and Follow Me! So many people were crowding around Jesus that day. I can imagine their conversations:

“Well, Ben, you think Jesus will give us the signal today?”
“Don’t know, Jake. But I’m ready – Golda, you’ve got my sword hidden in your bag, right?”
“Yes Ben, I’ve got it,” his wife assured him.
“Good. I’m so ready for this Jake. Those Romans killed my father and built a road – right through our farm, and I’m ready to pay ‘em back and then some. Hey – he’s calling everyone together! This could be it!”
Then they hear the words of Jesus: “If any man wishes to come after me, let him… deny himself….. And take up his cross… and follow me”
“What did he say, Jake?” asked Ben.
“I couldn’t make it out right… something about carrying our cross,” replied Jake.
“I am just right put out. What does he mean by that? Doesn’t he know we are all ready to pull our swords out and go get those Romans!?” Ben’s irritation was obvious and Jake agreed.
“This isn’t right Ben! I’m not ready to just give in. I want to pay back those Romans.”

No wonder Jesus followed up those words with “Whoever is ashamed of me and my words…” (Read: ashamed of me and my plan of action). What a shock to those who were listening! Instead of “take up your sword and follow me!” it was “Take up your cross and follow me.” Not a weapon against your oppressor and enemy, but a symbol of submission. No revenge. No vengeance. To our eyes: no power, no prestige, and no glory. No chance to sit, like James and John wished, one on his right and one on his left, ruling over people in Jesus name. What could this mean? They thought the messiah was strong! They thought God was almighty and didn’t put up with anything! Christians today may not realize it, but they share the same attitudes those listeners had two thousand years ago. We like Jesus to be our symbol of victory and domination. He’s a mascot and rallying point and we wave his cross in the air symbolizing, not our willingness to submit, but our intention to conquer. In his name we go forth… in what? In victory of course. No longer will liberals rule over us! We will rout them with the cross of Christ – they shall not rule over us and change drug laws, give asylum to illegal immigrants, and grant rights to gays! We don’t mind the cross when it is a weapon against demons; a symbol of our victory, a logo for the church triumphant. In fact we can even let it represent the pain and suffering we must bear patiently until victory comes. But we don’t much like it when it is a metaphor for God’s design that we follow him in his example of taking no revenge.
Do you think you want to follow Jesus? Listen to some of his instructions...

It can be enticing in this day and age for Christians to seek influence and power in the world, yet this often means circumventing the true path that Christ has set out before us. Who would have thought that exerting power or influence over the direction of our culture might be exactly what Jesus does not want his followers to do?

Quitting Hellish Christianity—Giving Up Power and Following Jesus explores Jesus’s words and thought-provoking insights when it comes to his expectations for what it means to be Christ-centered—which does not always mean Christian. Jesus said to his followers, “If anyone wishes to come after me, let him deny himself, and take up his cross, and follow me,” and author and minister Robert D. Sessford reminds fellow disciples of Christ that it is submission—not the sword—that Jesus expects of us. Quitting Hellish Christianity turns the lens back on evangelical Christianity and asks whether Christ is truly a symbol of a willingness to submit—or if he has simply become a symbol of victory or domination against a changing, liberal world.

Evangelical Christianity can often be hellish in attitude and craving of worldly influence and power. Yet Jesus’s instructions to his disciples were to practice principles of love, forgiveness, generosity, and kindness—even toward those who say “Lord, Lord” and still do not practice what he commanded. Quitting Hellish Christianity can help believers determine within themselves how to obey these commands of Christ—and teach others to do so also.

Robert D. Sessford has enjoyed over thirty years in the Christian ministry, affording him the opportunity to meet with many different people. From high-ranking politicians and government officials to street people, business leaders, prisoners, and musicians, each has provided him insight into the human heart and what it means to follow—or not follow—Jesus. Also married for over thirty years and father of six children, Robert is today joyfully ministering in a local church setting.