by Shaelah Kendall-Ossendryver & Cover design or artwork by Barabara Milanese 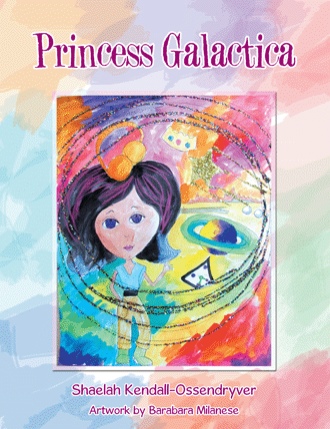 Once there lived a girl named Galactica. One day her mother and father got into a huge argument so they got divorced. Then her mother remarried a king so she became Princess Galactica. Soon after her mother became very ill and died and she was was left with her stepfather, who she hated because he controlled her day and night. Princess Galactica had a passion for engineering, and she was always trying to go into the attic where she had built a laboratory and was experimenting with star dust.

Once upon a time, there lived a young girl named Galactica. Her parents fought a lot and ended up getting divorced. When her mother remarried, she married a king. Young Galactica became Princess Galactica, but despite her newfound royalty, things go from bad to worse. Her mother dies, and Galactica is left living with a stepfather who doesn’t respect her or her dreams.

Unlike many other girls her age, the princess wants to be a famous engineer. She often escapes her stepfather’s glare and runs up to the attic, where she works in her homemade laboratory using stardust. One day, her stepfather gets invited to the Intergalactic Engineering Competition. He wants an invention named after him, but Galactica desperately wants to compete.

Despite her stepfather’s refusal, Galactica finds a way to attend with the help of a fairy and magical star. She shows off her amazing anti-gravity device but must leave before the competition is over. What happens next? Is it possible Galactica’s dreams will come true? See what’s in store for this imaginative little princess who won’t take no for an answer!

Shaelah Kendall-Ossendryver is nine years old and in fourth grade. She loves science, piano, singing, drums, and dance. When she gets older, she wants to be a plastic surgeon and also contribute time to Operation Smile.