A ‘Fool Idea’ That Unified Maryland 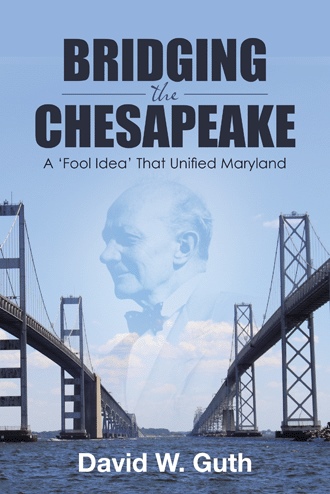 “One of the earliest centers for the development of truck farming in its present sense was along the shores of Chesapeake Bay, where fast sailing oyster boats were employed for sending the produce to the neighboring markets of Baltimore and Philadelphia,” reported the USDA Yearbook, 1900. However, with continued extension of rail lines into Delmarva, more and more of the harvest found its way to grocery store shelves in Dover and Philadelphia. This sparked a renewed interest in improved access to the Eastern Shore within the Baltimore business community.
It was in this environment that talk of a Chesapeake Bay Bridge resurfaced in 1907. State Senator Peter C. Campbell was the point man of this movement. He convinced the Merchants and Manufacturers Association of Baltimore that a bridge linking the Eastern and Western Shores was the answer. According to the Baltimore Sun, the association’s executive committee meeting heard from W.E. Weatherly, “an expert in construction,” at its July 23, 1908, meeting. Weatherly “showed how greater engineering feats had been done, and that other members of the committee discussed the economy of time that a railroad could thus effect.” A couple of days later, the Sun reported that a consensus of engineers it had interviewed – although no one was specifically identified – agreed with Weatherly’s assessment. “While the plans are still in embryo, it is said the matter has been sufficiently discussed to make it certain that the engineering part of the proposition could be accomplished,” the Sun reported.
On November 30, 1908, the executive committee of the Merchants and Manufacturers Association allocated $1,000 for the purpose of contracting the firm of Westinghouse, Church and Company to complete an engineering survey of a potential interurban trolley bridge from Bay Shore, southeast of Baltimore, to Tolchester in Kent County. “We are convinced that the project of bridging the Chesapeake is feasible and possesses no great engineering difficulties,” said Frank N. Hoen, chairman of an association committee charged with examining the project. “Your committee believes that in securing the proposed survey, the Merchants and Manufacturers Association will possess valuable data; so valuable, in fact, that should the present projectors fail in consummating the enterprise, the survey will be worth to the associations and the interests of Baltimore all that it will cost.” Even before the engineering survey was complete, the Merchants and Manufacturers Association was getting the answers it wanted. Following an initial photographic survey of the bay bottom, the Baltimore Sun reported on December 29 that the chief engineer was preparing “an encouraging report.”
Bridge supporters had everything they needed – except for money. While talking about building a bridge is cheap, actually building one is another thing. Nor was everyone supportive of the project. Even before the business group began its bridge discussions, forces lined up against the project. As early as March 30, 1908, the Baltimore Sun published a letter penned by an anonymous scribe identified only as “W.” His main argument against the bridge was construction challenges created by winter ice on the Chesapeake – an argument the engineering study later refuted.
“The quickest way to reach the Eastern Shore would be a ferry from North Point to or near Tolchester and an electric line to Chestertown and on to Dover and to the south, reaching out as fast as business would justify construction,” the anti-bridge “W” wrote. “A speedy turn in time might do for the city what a much more pretentious scheme in the future may fail to secure in trade from the Eastern Shore.”
Nor was the Baltimore business community unanimous in its support for a Bay Bridge. “It is hardly a proper ethical spirit, perhaps, for one trade body to criticize the plans and policies of another, especially when both should be working to the common end of the advancement and greater prosperity of Baltimore,” said Baltimore Chamber of Commerce President Charles England. “I cannot help regarding the proposition to bridge the Chesapeake as futile and one which will never forcibly appeal to the judgment of the business element.
“The state would hardly consent to such a suggestion, and I am convinced that in view of the possible accomplishment of a continuous interwater service from Florida to New England, the government will intervene to prevent one of the most important of these connections being obstructed by a bridge or some other artificial structure.”
Some said they considered the bridge proposal to be a joke. James C. Gorman, a local manager of the Atlantic Transport Line, a steamship company, said that the idea of building Chesapeake Bay Bridge struck him as being “ridiculous and impractical.” Thorton Rollins, another steamship operator, said, “I have heard this suggestion advanced before but never took it seriously, nor did I think those who proposed it every thought it could be accomplished.”
“To build a bridge sounds well, and to span the Chesapeake in this way might bring the Eastern and Western Shores closer together,” Rollins said. “But it would take years for the preliminaries to be worked out, for the capital to be raised and to secure the state and federal consent to its construction, even if found feasible.”
Rollins was prescient. The Baltimore business community was divided over the prospects of the bridge and the people of the Eastern Shore were skeptical, at best. As for the General Assembly, lawmakers looked to the captains of business and industry to, literally, pave the wave. Unfortunately for the bridge advocates, that support was not forthcoming. The idea of building a Chesapeake Bay Bridge was, once again, put on hold. However, a passion for bridging the barrier that had divided the Maryland throughout its three-century history had been ignited. And this spark would smolder in government and business circles for the next three decades before desire and opportunity were finally linked with the resources necessary to get the job done.

When the first span of the Chesapeake Bay Bridge opened July 30, 1952, it was a watershed moment in Maryland’s history.

The construction of the bridge took political courage, creative engineering, people working together, and a determination to overcome pettiness. In this detailed history, journalism professor David W. Guth traces the bridge’s history from its planning to its post-construction effects on the region.

From his boyhood memories of the bridge to the details of its construction, the book also tells the story of the people of Maryland—often referred to as “a confederacy of two shores.”

The recurring themes during the debate over building the first, the second, and now possibly a third bridge highlight issues confronting all Americans, including social and political equality, the price of unrestrained growth, the role government should play in our lives, and the importance of enlightened and courageous leadership.

While there were unintended consequences that went along with building a bridge to cross the Chesapeake, it began the process of removing social, political, racial, cultural, and economic barriers.

David W. Guth is an associate professor at the William Allen White School of Journalism and Mass Communications, University of Kansas. Born in Baltimore and raised on Maryland’s Eastern Shore, he earned a bachelor of arts from the University of Maryland and a master of arts from the University of North Carolina. His research interests are crisis communication and political communication. Prior to teaching, Guth was a broadcast journalist and a public relations practitioner. His reporting honors include the prestigious Peabody Award. He is the co-author of three public relations textbooks and the award-winning Media Guide for Attorneys.