Whose Birthday Is It?

A Further Adventure of the Precious Knights and Timothy Dragon 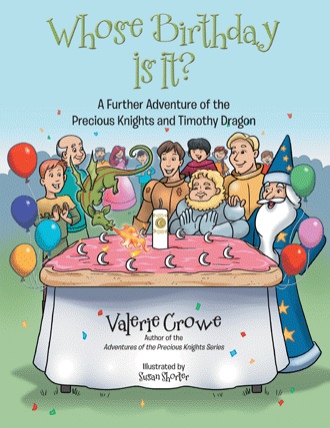 Whose Birthday Is it?

(A further adventure of the Precious Knights and Timothy dragon).

In the land of Everbright, across the bleak mountains, the day had started in the usual way. Our three favorite knights, Sir Gold, Sir Silver and Sir Rusty were doing their morning exercises. Now everyone knows that to do jumping jacks while wearing a suit of heavy armor is very difficult, no matter how bright and shiny the suits are. (Except for Sir Rusty, whose armor looked as if it hadn’t been polished in weeks.)

Sir Silver gave up after a few jumps (due to the fact that he had eaten 5 strawberry tarts for breakfast) and he decided to go down and discuss some new stripy dragon tactics with Timothy, the pet dragon that our three knights had rescued a while ago. Sir Silver whistled a little tune to himself as he went down the steep steps to Timothy’s quarters. Usually, Timothy would jump up and down with excitement as soon as he saw any of our three famous knights, and in fact they had to be very careful because Timothy was growing quite quickly, and his warm chuckles had begun to be very hot belly laughs of late. However, this morning Timothy was huddled in a corner looking a little miffed. When Sir Silver greeted him, the dragon turned his back looking very sad and started to clean his claws with his long forked tongue.

Sir Silver shook his head in amazement. Whatever was the matter with Timothy?

Julian, the young squire whose job it was to feed Timothy, and also to play with him when the knights were off on their quests, shook his head sadly and replied,

“I’m sure I have no idea my Lord. Early this morning, everything seemed fine. Timothy was his usual friendly self, but he did seem just a little excited. After I had brought his breakfast, he looked at it, tasted it and then whoosh! He breathed out a great breath of fire and his breakfast went up in smoke, you might say.”

Sir Silver frowned, because this was not Timothy’s usual behavior at all! The knight trotted back upstairs to tell his friends that all was not well in the kingdom of Everbright, and especially in Castle Precious.

“Maybe you can find out what ails our winged friend” , Sir Silver said to Sir Rusty. After all, Sir Rusty was Timothy’s favorite knight, as he had bonded with the baby dragon right after he had hatched, and he would spend long hours every evening just learning to communicate with him. However, Sir Rusty had no luck either. Timothy just sat in the corner and looked very moody. The sad part is that Princess Crystal had been called away to a foreign land in order to heal some relatives, else she would have solved the problem with the drop of a tear. So the knights just had to solve this problem themselves.

Now Sir Gold, who was very clever as well as very brave, sat down with the two other knights and they had a deep discussion. It was very important for them to find out why Timothy was unhappy, as the young stripy dragon was very valuable to the castle when planning battles against the evil dragons that roamed the kingdom. Timothy, like all baby dragons, could sense if the stripy dragons were planning to attack, and he could let the three knights know if there were plans being hatched to stir up trouble in the land.

The three friends thought and thought, but couldn’t come up with any reason for Timothy’s behavior. It was decided that Sir Rusty and Sir Silver should ride into the forest and talk with the local wizard to get some ideas. Off they rode, and on their way they came across a band of stripy dragons that were causing all sorts of problems in one of the local villages. The knights had to stop looking for the wizard, and deal with this little problem. After some fierce fighting, which ended in victory for our knights, and the defeated stripy dragons flying off to their lairs in the bleak mountains to lick their wounds, Sir Silver and Sir Rusty eventually came upon the local wizard who was making potions. They exchanged traditional greetings, and the knights told the wizard about the problem with Timothy. “We are very worried about him,” said Sir Rusty. “We have never seen Timothy so down in the dumps and grumpy before”. 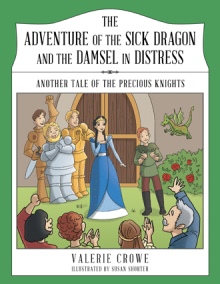 The Adventure of the Sick Dragon and the Damsel in Distress
Valerie Crowe & Illustrated by Susan Shorter
$12.45

Timothy the dragon is in a rotten mood. The Precious Knights Sir Gold, Sir Silver, and Sir Rusty can’t understand what’s caused their loveable little dragon to be so miserable. Sir Rusty and Sir Silver embark on a quest to visit a local wizard to determine why Timothy is upset.

After encountering a marauding band of stripy dragons and dealing with that problem, the two knights find the local wizard who reveals the reason for Timothy’s mood. Could it be they missed celebrating an important milestone? Perhaps Timothy’s feelings hurt because they forgot his important ten-moon birthday? The friends must return to the castle in time to fix the problem.

Whose Birthday is It?, a picture book for children, shares how even dragons can be disappointed but that good friends can help make life better.

Valerie Crowe is the author of two other books in the Adventures of the Precious Knights series. She writes from her home in Palm Harbor, Florida.