A Primer on Freedom, Government, and Prosperity 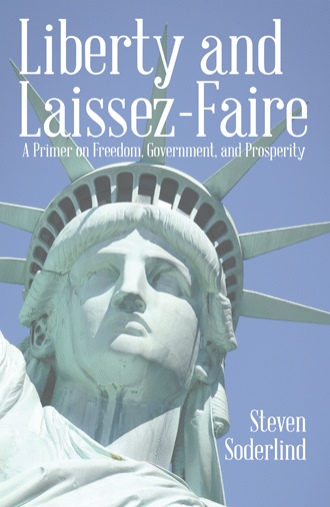 “I want government that is so small I can barely see it.”

These days, especially in America, the “libertarian view” is tied to an optimistic vision of reduced government and free, unregulated markets, traditionally called laissez faire. Proponents from Raul Ryan to Rush Limbaugh claim to have distilled this practical stand from respected economists, referencing the likes of Adam Smith, John Stuart Mill, Frederick Hayek, and Milton Friedman. They also take heart from astute reflections on Soviet communism associated with Ayn Rand, William Buckley, Jr., and Patrick Buchanan, to name a few.

So the matter for many is settled: liberty and laissez faire complement and reinforce one another. But make no mistake, laissez faire can also undermine liberty by tacitly condoning an oppressive status quo: human trafficking, racial and gender discrimination, monopoly, gangs, etc. Many see The Great Recession as a consequence of deregulation – toying with laissez faire. Thus a deeper examination seems in order.

The goal of this essay is to provide a relatively balanced account of connections between liberty and laissez faire. It will highlight the views of eminent economists like Smith, Hayek, and Friedman, and add venerable critiques associated with Malthus, Mill, Marx, Veblen, and others. Many readers will be surprised at the complexities involved; even strident supporters of laissez faire have harbored reservations.

A primer, this essay offers only an introduction. It surveys a vast territory, spotting grand features and encouraging deeper investigation. Hopefully readers will appreciate both the portrait and the prompts.

With the election of Donald Trump as president of the United States of America, the relationship between laissez-faire and liberty is drawing renewed attention.

Steven Soderlind, an economist and professor emeritus at St. Olaf College in Northfield, Minnesota, delves into how the two are connected, emphasizing the critical role that economics and politics play in determining our liberty in this extended essay.

His goal is to encourage thoughtful reflection on government at a time when many associate liberty with minimal intervention. Find out what the past tells us about preserving and promoting liberty as well as the thoughts of venerable economists, philosophers, and critics such as Adam Smith, Thomas Robert Malthus, David Ricardo, Karl Marx, John Stuart Mill, August Friedrich von Hayek, Joseph Alois Schumpeter, Gunnar Myrdal, and Milton Friedman.

Throughout his analysis, Soderlind seeks to answer a key question: Is laissez-faire or government action the preferred route to liberty?

Join the author as he considers the advantages and disadvantages that laissez-faire brings to the quest for liberty and our continuing mission to form “a more perfect Union.”

Steven Soderlind is professor emeritus at St. Olaf College, Northfield, Minnesota. During forty-some years of teaching, he specialized in urban and regional economics, the history of economic thought, and social choice. He also led international travel studies and taught across the curriculum in statistics, great works, and the history of science. He earned a bachelor of arts degree in mathematics and economics from the University of Minnesota and a Ph.D. in economics from the University of Massachusetts at Amherst.