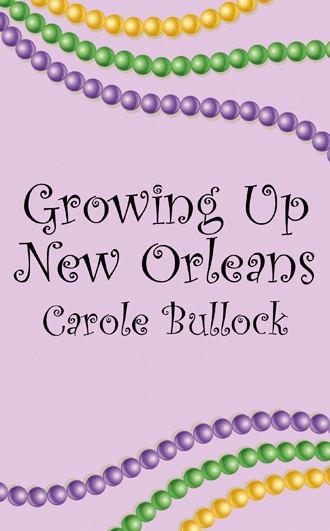 “For centuries, intensive settlement in Algiers

extended little beyond Algiers Point. The completion of

the Greater New Orleans bridge across the Mississippi

and the construction of Victory Drive (now General

rapidly for the next twenty-five years.

There are famous landmarks in Algiers that still

stand, and remind us of our musical heritage! The

most influential in jazz players in America. A statue

stands at the river levee, overseeing the passengers heading to Algiers Point.

combed back, looked like a miniature Clark Gable in

his suit and bow tie. He whirled around and answered,

“James,” to the elderly woman sitting on the velvet

The mother, with flaming copper hair, wearing a

approval. Her outfit was completed with a fedora (and

a scarf tied around it) and dangling gold bracelets …

not the average funeral attire. But this was no everyday

Today, the smells, styles, and dialects brought back the

Old South to us, as we said our heartfelt good-byes to Oma.

There was never a shortage of chattering, as most

of the guests were lifelong friends who had come to pay

their last respects following the funeral, at a friend’s

house located off of St. Charles Avenue in New Orleans.

When we heard the news that your mom had died,

my friend, Caren, and I were determined to be there

for the funeral and to say our own good-byes to Mrs.

Caren and her family had all lived on the West

Bank area of Algiers during our childhood. When were

heard that news that Marsha’s mom had died, we were

determined to be there to support the family.

Even before we entered the home, we could smell the

the kitchen. Several tables were set out in the patio for

the multitude of king cakes (including one stuffed with

a delicious boudin sausage!) A table near the kitchen

was where family and friends gathered to share a meal

and the memories of Mrs. Hopper and her close family.

We were often at Marsha’s house after school, eating

We also felt the loss, as Mrs. Hopper had been a

person who was as close to us as our own DNA. The

memorial service program, “A Celebration of Life of

insights as to how motherhood transcends many

are especially revealed during some of our darkest

During the service, a pianist played several

spoke the eulogies, each retelling the heartfelt memories

of motherly love. Her daughter, Nancy told stories about

her mom, who many called “Oma.”

At the closing, the piano player stepped up the spirit,

playing, “If Ever I Cease to Love You” (the traditional

I was glad to be there, Mrs. Hopper, Caren too. Your

casket was velvet red, gold trimmed. You were so lovely.

The cherry red lipstick matched the outfit picked out for you.

I can’t imagine how hard it was for

your close family, to see you there, but not there.

They all handled it with grace and bravery. We tried to hold back our own tears.

After the church service, I remember something

said by oldest (another Carol) that rang so true. “Yeah,

them up, always opening her home (and dinner table)

to anyone who seemed hungry.”

There were plenty of miscreants. Over the years

many neighborhood girls and boys of all ages, who

were from broken homes, or survivors of disasters, were

healed with her utter acceptance. But some children

were a bit more trying on her nerves than others.

And you know, Mrs. Hopper, I think I must have

been your first real trial, and starting at an early age.

There was always some sort celebration, parade, or

Mardi Gras Ball around the corner. Mrs. Hopper had a

holiday tree for almost every occasion. The household

was one that was forever attracting friends who wanted

In Growing Up New Orleans, Bullock provides a rare and often humorous peek inside her family’s life as they paved the way for a new breed of New Orleanians. With photos included, Growing Up New Orleans gives a past and present look at not only Bullock’s life, but also of the common ground—New Orleans. This collection of stories revolves around her childhood in the 1970s, and their remarkable friends and neighbors. The author shares stories of the everyday lives of teenagers, bold in their desire for adventure as they found ways to sneak out and have beignets for breakfast or pet alligators for Christmas Bullock’s family were among the first settlers to brave the crossing of the Mississippi River, entering the new and exciting life in New Orleans as they landed in the West Bank neighborhood of Algiers. The narratives also reveal the fabric of the Omas in New Orleans, examples of which can be found in the schools. The chapter, “White Bean Soup,” features an account of a family who overcame tragedy by showing that graces and giving can be found by serving a bowl of soup. The chapter, “The Charms of Ms. Shea,” tells about the drama teacher who changed the lives of many.

Carole Bullock earned a bachelor’s degree in biology from the University of Texas She co-authored, Crusader I: The Serpent Cross, a thriller set in New Orleans. Her family lives in Dallas; She enjoys writing, cooking, traveling, and being a mama.