Back from the South

A Couple’s Transitions from Segregation to Integration 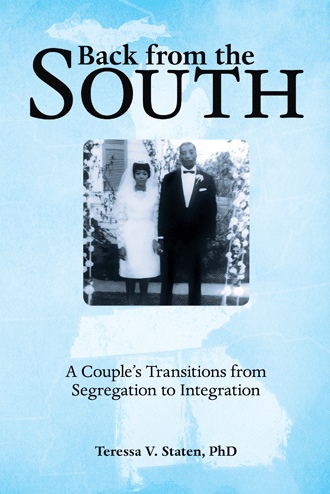 Growing up in Pulaski at the time, which I didn’t realize then, was pretty good. I got a decent segregated education. I wasn’t the best student, but I did well in English and learned all the basics of mathematics. This, of course, I attribute to the teachers who lived in Pulaski, knew my mother, and would send a note home if I didn’t do my work in a satisfactory manner. And of course, I would get a whipping by her on the weekend or whenever she got around to it. I remember getting whippings in my hand with a belt by teachers, for not learning certain facts or remembering a poem completely. I grew tall early and became a good athlete in several areas including basketball, baseball, and football. However, football became my best sport, and I felt that I was pretty good on the Giles County High School team. By the time I got to high school, I was six feet and two inches and weighed about one hundred and eighty pounds. By the time I graduated, I was six feet and five inches and weighed around two hundred pounds. Our school didn’t have the kind of weight machines and equipment that the white schools had, and those were a far cry from the level and investment in equipment that exists in schools today. So we practiced outside, often in cold and wet weather to get in shape. We ran for miles, jumped rope, climbed ropes from ceilings, and jumped over piles of dirt and practiced calisthenics, which was considered the “in thing” in physical fitness. Our team was strong and in good shape. I started as a tight-end and ended up being a tackle. Our high school team beat every school that we played, and became the undefeated state (colored) champions in Tennessee for two years straight. I was a star player at Giles County High School. My Coach, Coach Simons, was very strict, and I was very loyal to him and believe that his discipline influenced me through life. During my senior year, he was hired as head coach at South Carolina State College. South Carolina State College is the only land-grant historically Black College in the State and is located in Orangeburg, South Carolina. Coach Simons recruited six other graduating seniors and me to attend South Carolina State to play football. So in the fall of 1951, I was a starting left and right tackle on the South Carolina State football team. Our team went undefeated. We won eight conference games and one non-conference game. I was really proud of being at South Carolina State, but unfortunately for me and the others from Giles County, Coach Simons was fired directly after the season was over. It was quite a story or rumor about how coach had spent money inappropriately to pay for an assistant coach who was hired without the approval of the President. Another rumor was that he refused to play a board member’s son and had made him sit out for a year. Whatever happened, I really never knew, but I was shocked and scared about what was going to happen to me. Only three of us from Giles County High remained in college while two left at Christmas time and never returned. While I was only taking thirteen credits, I was not performing very well in my classes. I had met and fallen in love with a beautiful girl a year older than me from Charleston, South Carolina. When spring practice time came around the new coach informed us that we all had to try out to make the team and that he was particularly concerned that those of us who came from Giles County would have a harder time making the team. My girlfriend, Gloria wanted to get married, so she planned a small wedding at her father’s home in Charleston, and we got married in June of 1952. Shortly after that, I enlisted in the U.S. Marine Corps. There had been recruiters at South Carolina State emphasizing that the Marines were going to integrate fully. This was a result of the Negro Marines who had served and had been trained separately at the Montfort Point Boot Camp, who had paved the way. Three of our officers’ were black, mostly coming from those trained at Montfort Point and were in the segregated corps, but we shared housing mess hall privileges. As a group, we were told that our classification test scores were far below average, but that we would be accepted because no Black could score as the same as Whites. I took this personally and really aimed to be the best that I could be, and this was the attitude of other Blacks in my training unit. I was one of nine “Negro Marines” assigned to the Mediterranean, where I served for six months. The nine of us went to eat together, to the library and played poker or other card games. We would discuss issues in private about the Corps and what each of us encountered on an individual basis. While discrimination was not up front, we all had instances where an officer or fellow Marine would deliberately slip and refer to us as “coons” or “niggers.” Sometimes in the mess hall,” “our food would be less than others, or we didn’t get the same treats, chocolate candy bars or gifts that would come from the states. I remember a white marine by the name of Frank, who was from Roanoke, Virginia, who would slip and give me one of his bars or other special treats that the Blacks did not get. The Marines was “integrated,” but as a group and as individuals we did experience racial discrimination.

In Back from the South, author Dr. Teressa V. Staten offers an autobiographical picture of how events of the segregated South defined her character and that of her late husband, John. This African-American couple was married forty-one years until a tragic accident ended John’s life.

This memoir chronicles how Teressa and John overcame blatant racism to achieve numerous accomplishments. It shares the couple’s personal struggles with depression and the unexpected, heartbreaking suicide of their son. Back from the South explores the positive and negative consequences of being the first to integrate many situations in a rapidly evolving culture resistant to change. Staten describes how their character, education, and sheer determination led them to leave their hometowns in the South, move to the north, and work through institutional odds to become middle-class Americans, often being the first blacks to work and live in all-white workplaces and communities.

Covering a span of a half century, Back from the South provides insight into one couple’s pilgrimage during the height of the civil rights movement.

Teresa V. Staten, PhD, earned a doctoral degree from the University of Michigan and did post-doctoral study at Harvard University. She has written articles in educational journals, magazines, and has also written technical documents related to education policy. Staten held positions at all levels of education and retired as Chief Deputy Superintendent of the Michigan Department of Education.