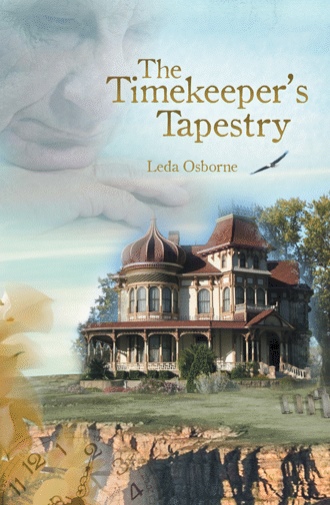 Chloe poked her head in the barely open library door with a panicked whisper. “The master is home ma’am. What shall I do?”

“I shall be there momentarily. Do not let anyone enter here,” she said, quickly rising from her place at the piano.

Blaine’s eyes quickly scanned the room looking for a place to hide. Aside from slipping behind one of the thick drapes that hung at the windows, there was none.

“Keep still,” Penelope cautioned as she slipped into the great room, and then he was alone.

Blaine stood still a moment considering all the ways this could play out. The best case scenario would be for him to simply vanish back to his own time. Sadly, he could not make that happen on his own. He moved to one of the windows to see if he might make an exit there. They would not open. Even if he could get outside the house, the number of men outside greatly reduced his chances of getting away unseen. Like an amateur thief in a B-movie, he opted for the flimsy cover of the drapes and slipped in behind one hoping he would vanish soon. He did not. He stood there listening to the sounds of Penelope, her children and staff as they welcomed home Levi Burke. Blaine felt like a secret lover who had been hidden away from a dangerously jealous husband. Yet, he and Penelope had done no wrong. They weren’t even on a first name basis yet. Still, this was the 1600’s. Adultery was a considerably more serious offense in this time than in his. Penelope could be in serious danger if he were discovered. He suddenly froze as he heard the library door open quietly.

“Mr. Duncan,” he heard his name whispered, “are you still here?”

It was Chloe. Blaine peeked out from behind the drape. “I’m here,” he said, feeling a bit like a guilty child.

Chloe wrinkled her nose at the sight of him cowering behind the drapes. “Everyone has gathered in the parlor. I am instructed to let you out the side entrance where you can conceal yourself in the trees beyond. We must go quietly.”

Blaine fell in behind Chloe as they stepped into the great room. He was momentarily distracted by the elegance of it all. The flawless marble floors, and matching marble pillars. The rich rugs, tapestries and grand furnishings far exceeding their counterpart in his time. As they were about to turn into the carriageway entry, the parlor doors opened. Levi Burke stepped into the great room in time to see Blaine and Chloe. Everyone stopped.

Levi Burke eyed Blaine’s clothing, clearly inadequate to the time. Blaine knew he must look like a pauper.

Levi scowled. “Chloe! Who is this vagabond in my home?”

At the sound of his stern question, Penelope rushed to the great room to stand beside her husband. Chloe’s eyes widened in fear. She looked at Levi, then Penelope and back again. Blaine stood motionless.

Penelope didn’t know what to do. She stood there in silence, hoping this would not be the moment Mr. Duncan disappeared. Chloe lifted a hand to gesture toward Blaine as though she were going to introduce him. As she did so, and before she could speak, Blaine vanished. Chloe, Penelope and Levi each gasped, but each for different reasons.

Penelope had no idea how she would explain this or what Levi would do when she did. Chloe was not shocked by his disappearance, but feared she may be asked to betray Penelope with an explanation. But Levi’s gasp was one of pure astonishment. An astonishment that would soon be followed by a most terrifying conclusion. One that neither Penelope nor Chloe had ever considered. One that would have ramifications across time.

It is 2016 when Blaine Duncan arrives with his wife, Christina, at the sprawling Maine estate they recently purchased. Burkeshire Manor has changed significantly since the late 1600s when its first mistress, Penelope Burke, lived a lonely existence within the confines of an arranged marriage. But as Blaine begins work on restoring the old manor, he has no idea that tragedy is looming in his own future.

After Christina dies a short time later, Blaine spends the next few months attempting to move forward alone. But what he does not know is that in an effort to open the past to the present and provide Blaine and the manor’s first mistress with an opportunity to meet, a timekeeper has forgotten an important detail that has changed the timeline in a frightening way. Now he must reveal himself and enlist the aid of Blaine to help him right his terrible wrong by traveling into the past to save Penelope and her maid from tragedy. If they fail, misfortune will haunt the manor and Blaine forever. Unfortunately, the task may be more challenging than either of them ever imagined.

In this spine-chilling tale, boundaries between the past and present disappear after an immortal unintentionally alters a timeline and sends a widower back three hundred years to help him repair it.

Leda Osborne is a seasoned writer who has produced a wide range of articles, short stories, music, and poems in her lifetime. She resides in North Central Washington where she is hard at work on her next title. The Timekeeper’s Tapestry is her debut novel.