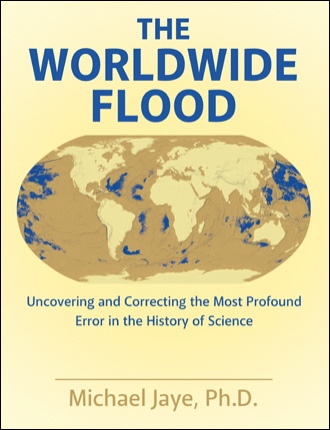 An alternate subtitle for this book could have been, “The Transformative Power of a New Observational Tool” – a chapter in Marcel Gleiser’s book The Island of Knowledge: The Limits of Science and the Search for Meaning. The transformational tool featured in the chapter is the telescope, and Gleiser recounts the history of one of its most famous users, Galileo, who observed that Jupiter’s moons orbit Jupiter and not Earth. The ensuing transformation: the end of the idea that Earth was the center of the universe (geocentrism).

What the telescope was to Galileo in the early seventeenth century, Google Earth and Google Maps (satellite view) are to us in the twenty-first century. The maps allow us to observe the topography of submerged landscapes, something no human was able to do before the publication of the maps in the past decade or so. The information found in the new maps leads to another scientific transformation: uncovering and correcting a fundamental error in the geology that has affected the most recent two centuries of science. The error, geology’s “no worldwide flood ever” paradigm, influences our understanding not only of the earth’s history, but also of human history and especially anthropology. It was no small mistake.

My journey into geology began soon after I moved to the Monterey, California, area in 2009, when a long-time acquaintance suggested that I might find Monterey Canyon interesting. Out of curiosity I looked at it using Google Maps, then relatively new, and that is when I observed something quite puzzling and intriguing.

I was struck by what appeared to be a system of rivers in the offshore region (see Figure 1). How, I wondered, did those river systems become submerged in more than 3 km (about 2 miles) of water? What caused such a massive amount of water to cover them, and where did the water come from? Why didn’t I know about this?

So began my education and search for the truth about geology.

At the outset I was unaware that because of geology, all of science dismisses the idea of a worldwide flood. I was unaware also that the story of a great flood is found not just in the Bible (the book of Genesis) but in cultures worldwide as well. Yet because of geology, all these stories are discounted as myth – at times condescendingly, but ultimately, ironically. It turns out that many of the deluge stories are preserved firsthand accounts of survivors. There was a worldwide flood, and it so transformed the Earth that it remains a part of our story.

With our inability to see ocean depths until recently, it is no wonder that geology’s “no worldwide flood” tenet has lasted for as long as it has. There had been little reason to question it, despite the ubiquitous narratives found in the human oral tradition. One would think that the new bathymetry information found on the maps would have inspired geologists to discard that tenet and pursue better science (and truth). Sadly, it has not. Unlike geologists, I treat the bathymetry information found in the maps as new data, and the questions that arose when I first saw those submerged rivers inspired me to delve into a very famous, if not historic, scientific problem.

What I have found is indisputable: geology’s fundamental “no worldwide flood, ever” paradigm rests on a logical error. Google Maps not only played a part in exposing that error, but they also revealed the source of a nearly incomprehensible amount of water. The maps I saw, together with other recent scientific findings, reveal that a flood inundated vast expanses of the Earth roughly 13,000 years before present (12,800 ± 150 years, with the time estimate derived from carbon dating of a nanodiamond layer caused by a cosmic impact). It nearly killed our species, and it forever transformed our planet.

Unfortunately, geologists and scientists belittle those who mention a worldwide flood. From their perspective, “no flood, ever” was such a triumph of science over religion, fact over faith, that no serious person – certainly, no scientist – would consider challenging it. The paradigm has been held so widely and for so long that it has become dogma, protected as an article of faith by geologists and scientists. I expect that adherents will attempt to dispute this book with claims that it has a religious purpose, but it does not.

In fact, this book is an exercise in science – its history and where it has brought us, and its purpose is to expose and correct geology’s “no worldwide flood, ever” error. I anticipate that this will create a scientific revolution that, perhaps paradoxically, will restore the old as new. To achieve this goal I use the scientific method, and I draw from such disciplines as anthropology, biology, fluid dynamics, geography, geologic processes, history, logic, mathematics, and physics. If you read through to the end of this book, you will have a better understanding of who we are, where we are from, and what has happened to our planet. In addition, you are likely to agree that “no flood, ever” is the biggest error in the history of science.

I intend to make the material accessible and understandable for as many readers as possible, because this is our story.

Two hundred years ago, geologists determined that there was never a worldwide flood.

But the early geologists’ conclusion—which continues to be believed today—is indisputably erroneous, according to Michael Jaye, Ph.D.

Told in easily understood language, Jaye explains how geologists got it so wrong, and more importantly, he challenges their modern-day peers to examine foundational beliefs, especially in the presence of new map data. Along the way, he identifies and rectifies geology’s historic error and its consequences, answering questions such as:

• Why do geologists believe that there was never a worldwide flood? How is this belief erroneous?

• How did submerged structures like Monterey Canyon form? What process do geologists ascribe to their formation?

• In what way are Google Earth and Google Maps similar to Galileo’s telescope?

With new map data revealing submerged rivers in more than two miles of water, it’s clear that such a volume could only have a cosmic source.

Jaye identifies the impact remnants, and he explains how its effects irreversibly changed Earth’s ecosystem. Humans are among surviving species, but we find ourselves ill-adapted to the post-flood ecosystem.

Discover a historical, scientific, and philosophical treatment of The Worldwide Flood—it will forever change the way you consider Earth and human history.

Michael Jaye, Ph.D., recently retired as an associate professor at the Naval Postgraduate School in Monterey, California. He previously spent fifteen years teaching mathematics and its applications at West Point, New York. His interest in the worldwide flood began with Google Maps images of the Monterey Canyon system.