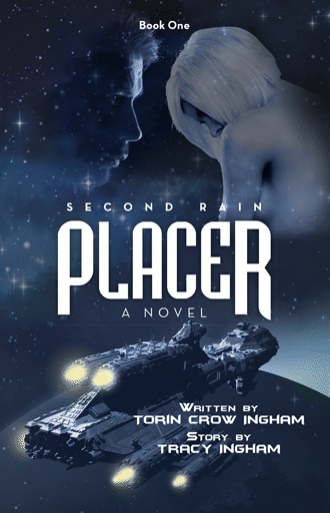 Rain stood surrounded by three men. Words had been exchanged between her and the largest of the trio. A red flush colored her cheeks. Her eyes narrowed. The corners of her mouth turned down. Her lips tightened. She whipped her leg around with a quick, graceful spin to take the tallest of the three squarely on the side of his face. The heel of her boot opened a large gash across his cheek as his head snapped back savagely. He staggered, fell against the table then rolled off onto the chairs with a crash. She twisted around again. The second of the three got slammed with an elbow to the jaw. He let out a yell as he fell back against the wall and his mug flung out of his hands. A trail of golden foaming beer splattered across the table to land in the laps of two dusty miners who looked like life itself had pissed them off.

They jumped up to intervene. Placer shook his head, patted the weapon on his hip and they grudgingly sat back down.

“This novel is a metaphor for what we as humans are endlessly searching for: what it means to be human.”

Rain is missing, and Captain Placer Cade is on a desperate hunt to find her. As the leader of a powerful mercenary group, he is confident there isn’t much that can stand in his way. He crosses borders, confronts enemies, and chases every hint, leaving a trail of destruction in his wake as he travels throughout known space

When he encounters a woman from his past, however, he finds an obstacle he can’t easily overcome. Isbeth was young when he saved her from a terrible fate. She has never forgotten, and now she wants only one thing in the universe: Placer. And when there’s too much drink, too many memories, and faith in everything is failing, anything can happen. Placer sets his own boundaries and believes morals are a matter of opinion. He has to make tough choices—the kind no one should ever have to make. But can he live with himself in their aftermath?

In this science fiction novel, a mercenary captain of an interstellar ship searches for a missing woman while managing a complicated relationship with a former flame.

Torin Crow Ingham is a college graduate, martial artist, and metal sculptor with a passion for writing.

Tracy Ingham is a father, artist, and writer who found canvases too small to tell the stories he wanted to tell.