A Leap to an Ecological Economy 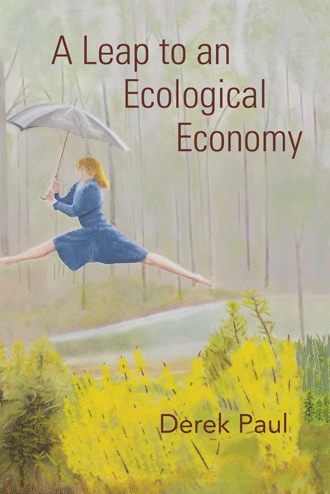 The purpose of this book is to outline the fundamental changes in economics that are necessary to bring the human race through its present series of crises. The most serious . . . is . . . climate change. . . many economists . . . have . . . recognized that climate change cannot be addressed within the traditional economy and, because of the urgency, it is vital to change economic thinking and practices. . . to develop the thread of new, ecological economics . . . The most important of the needed economic changes will lie deep in the minds of individuals everywhere—a change of paradigm. . . In the new paradigm only the only the demand for rationality remains from the old one, and at its center is the need to respect the Earth and sustain all of life in its fullness and diversity.
. . . an ecological economy (EE) must feature:
a) a clear distinction between wealth and money, and taking good care to increase wealth; assessment of wealth in terms of resources . . .
b) consistent full employment
c) an end to fossil-fuel burning
d) minimal extraction of primary resources, including trees, by maximizing recycling
e) the pursuit of ecologically sound goals in business and industry
f) a preference for local production, . . .
g) a transformation of the advertising industry
h) more benefit corporations, . . .
i) publicly owned banks . . . in all single-currency areas, for funding what needs to be done in the EE context
j) clearly defined global commons, . . .
k) sound population policies in all regions, . . .
l) increasing organic farming with a view to eliminating pesticides and herbicides for . . . planetary health and improving food quality and nutrition . . .
m) decreasing militarism and increasing international cooperation
n) . . . reduction of . . . inequalities
o) new indices including capital wealth indices . . . for assessment of prosperity and human welfare and the good state of the planet.
Employment . . . anyone looking for a job should be able to get one within days, . . . Many of the new jobs will . . . be generated in the general field of natural wealth creation, . . . Restoring or enriching the commons increases natural capital, . . . Creating and maintaining infrastructure increases built capital. Education increases human capital, . . These three forms of wealth are the fundamental bases of the economy as it needs to be.
. . . The first and greatest single step toward sustainability will be the reduction to zero of greenhouse gas emissions from fossil fuels.
The standard negotiating routes for the reductions of ghg emissions, namely carbon taxes or cap and trade, will not produce the final result of zero emissions soon enough to meet Nature’s deadline;
Governmental policies are urgently needed 1) to convert all electrical production to non-emitting methods and 2) to eliminate emissions from all surface transportation.
. . . In an ecological economy, health would come first.
. . . it will be necessary to choose a banking system . . . One type of solution would . . . separate the task of generating funds for ecological progress from the existing banking system, . . . by creating new, publicly owned banks to issue the required funds at zero interest.
. . . 45 percent of banks are publicly owned in Brazil, 60 percent in Russia, 75 percent in India and 69 percent in China. . . the BRIC countries. The four . . . together have 41 percent of the global population, . . . and go-ahead economies.
Full employment gives rise in a natural way to a degree of redistribution since the poorer areas of a large country are often plagued with high unemployment.
A huge historical error of western civilization was to largely deregulate banks . . . while allowing continuance of profit-making as the sole objective of corporations, including banks, and of other conditions . . . wealthy corporations paying as little as seven percent tax on huge profits. Tax avoidance is further exacerbated by tax havens.
Farmland . . . waterways . . . air . . . species . . . the sea bed . . . it is vital that they not be neglected.
The United Nations Population Fund (UNFPA) . . . is key to making good the population policy . . . UNFPA is also one of the world’s largest funders of population data collection. . . it needs greatly expanded funding; and . . . is “the focal point for the effort to stabilize the global population at eight billion by 2015.” That objective remains, except that it didn’t happen by 2015.
It is essential that global population come to its maximum as soon as possible and then begin a decline. Any other course will guarantee the elimination of vast numbers of species, which are already in steep decline; and will render more difficult the already colossal challenge of addressing climate change. The new paradigm calling for life-centred economics . . . demands not merely a halt to human population growth, but a decline.
Farming . . . the ecological economy can provide . . . the requirements for improving soil for organic growing. And this has to be a priority . . , an ecological economy . . . will be able to cope with the desperate state of farming on small farms in much of the world . . . can provide . . . the requirements for improving soil for organic growing.
Among . . . faulty social structures, militarism stands out as the most dangerous; it could condemn civilization to its end in an hour or so. And it has been sapping planetary resources for decades.
The new phrase, the new principle is international cooperation.

Is the present economy working for you and those around you? Is your government in debt? In your country, is there a real drive to deal with climate change? Are you aware of the great urgency of doing this? Are you aware that many economists consider that one cannot address climate change and other urgent problems within the economic system we now have?

If it seems to you that the world has come to an impasse, there’s a solution in the form of a new kind of economic thinking, with many practical changes to match. It’s called an ecological economy (EE). It calls us to put the health of all life on this planet as the central issue. The EE will focus on resources rather than only money. Money will no longer rule us; rather it will help us do what needs doing. And we’ll measure capital in natural units, not money. There’ll be employment for those who want it; and the extra jobs will be found in projects that will be directed at the health of the ecosphere; and that includes your health. The fields and forests that have been denuded of nutrients will, over time, be restored; carbon dioxide emissions from fossil fuels will be eliminated. The costs of such projects will be assessed in terms of resource requirements and the needed human effort, with money as the servant, not the boss. The nations will learn to cooperate better—it will be in all of their interests. The world’s burgeoning population will halt its expansion, just in time to give wild life the breathing space it needs.

Derek Paul is a retired physicist who, during his career, also became a peace monger and a peace researcher in the 1970s and gradually a generalist in the 1990s. He obtained a doctorate from Queens University in 1958, taught at the Royal Military College until late 1963, and was a professor at the University of Toronto. Paul is a member of two physical societies and of the International Society for Ecological Economics.