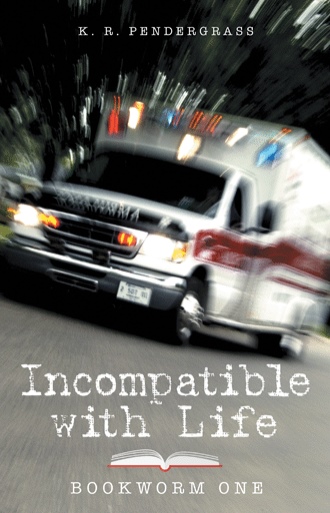 I stood at the sink in the ER nurses station, washing as much blood and... stuff... from my arms and face as I could. My hoodie was a lost cause. Nothing short of the laundry was going to fix it. But for the most part it had protected my gray t-shirt; it only had a few spot of blood on it. But peeling off the sweatshirt had smeared more streaks onto my face, so I started over again.
The automatic doors whooshed open and the Sasquatch,Thomas, strode in like he owned the place. Or maybe that was just my assessment of his self-righteous, condescending attitude. He saw me in the nurses station and gave me a snarl. fiWhere's your patient?fl he growled. fiI'm here to put him under arrest. He's going down for reckless endangerment, vehicular assault, anything else they can come up with!fl
Going down for? What was this, a John Grisham novel? I kept my cool this time, though, and my voice level. fiOk, no problem. Take the elevator down to the basement 1, turn left and ask the tech. He will help you find him.fl
A malicious grin crossed his face before he thought that through. fiWait,fl he said, confusion replacing the sadistic glee. fiThere's no patient rooms in the basement, only the...fl
fiThe morgue,fl I finished, trying to sound more cheerful than I felt. fiYou'll find him there. Won't even need to cuff him, unless you just want to show off your authority. He's not going to fight you. His injuries were incompatible with life.fl
A nurse passed by, and snorted, overhearing the exchange. Sasquatch turned bright red. I've heard the expression 'if looks could kill', but I didn't really understand it until this moment. I looks really could kill, I'd be downstairs in the cooler beside my former patient, who had died in my rig just outside the ambulance bay. The ER crew had worked him a very short time before concluding that his injuries were just too much..
Lieutenant Sasquatch shook his head at me. fiDamn trauma junkie,fl he muttered at me in disgust before walking away.
fiWho peed in his cheerios?fl asked the doctor, appearing behind me.
I shrugged. fiI guess that would be me.fl

Looking beyond her red hair, small build, and blue eyes, twenty-four-year-old Lindsey is a paramedic, a Christian, and a book collector. She owns just about every book written by Stephen King, Dean Koontz, Kathy Reichs, Karen Slaughter, and a host of others. But Stephen King is her favorite.

Lindsey’s best friend, Eric, works at a local used bookstore and is always on the lookout for special books to add to her collection. She’s thrilled when a hardcover copy of The Colorado Kid appears at the store; she wastes no time in making the purchase. While reading her new find, Lindsey discovers a black-and-white photo of a small boy, shirtless and sitting in a chair at a kitchen table; a ransom note is written on the back. At the same time, a frenzied man viciously attacks Eric at the store; he’s looking for that specific copy of The Colorado Kid that Lindsey just purchased.

Lindsay and Eric conclude that a little boy is in serious trouble, and the two friends become embroiled in a life-and-death struggle straight out of one of Lindsey’s beloved books.

K. R. Pendergrass lives in a tiny southern Kentucky town with her husband, two boys, and a spoiled little dachshund. When she is not indulging her passion for writing, she is either working as a paramedic, or following her other passions for God, her family, and deer hunting.